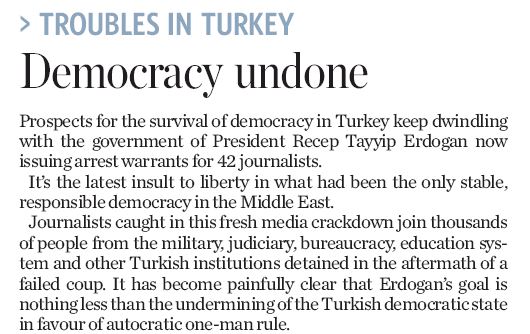 There’s no foundation to the Toronto Star’s claim on July 26 that Turkey used to be the “only stable, responsible democracy in the Middle East“.

In fact, Israel is the only thriving liberal democracy in the Middle East, a region which is a black hole when it comes to fundamental freedoms, tolerance and human rights. According to Freedom House, an organization which monitors and promotes the expansion of freedoms and lobbies for democratic change worldwide, Israel is the only “free” country in the region while Turkey is considered only “partly free”.

According to Freedom House rankings of 159 countries, Israel scored an impressive 80 out of 100 for being fully free while Turkey scored a measly 53. Israel has entrenched equal rights for all its citizens (Arabs and Jews alike) and its government is a parliamentary democracy consisting of legislative, executive and judicial branches. Israel has a vibrant free press, an independent judiciary, and is anchored by its commitment and preservation of civil liberties. A pluralistic, multi-faith and multicultural society, where freedom of assembly and dissent are embraced, not suppressed.

Israel is a progressive democracy surrounded by states suffering from tyranny, corruption, instability and the pernicious suppression of women, minorities and of basic human rights. 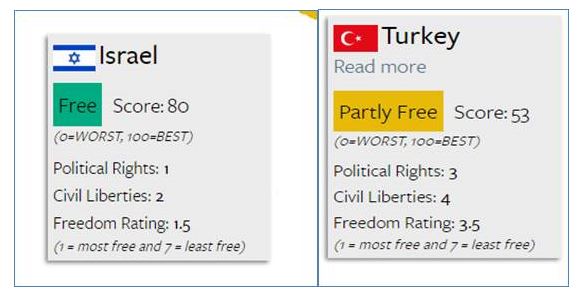 HonestReporting Canada has communicated these concerns to senior editors at the Toronto Star calling for corrective action.

Stay tuned to this page for any updates.