On May 14,  the Toronto Star published the following Associated Press wire report to its website which turned a Palestinian terrorist into a victim of Israeli brutality: 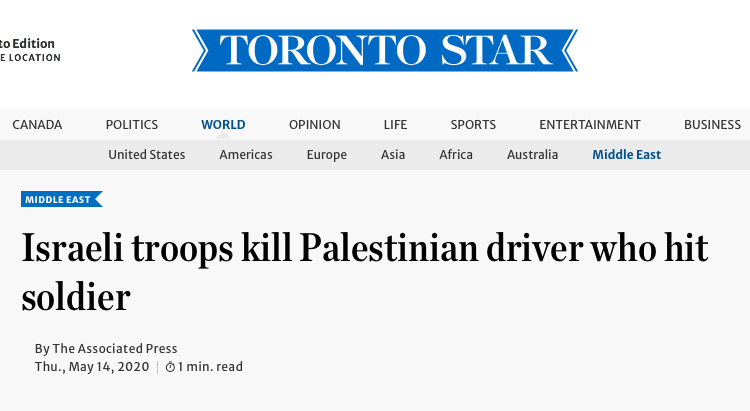 What the headline didn’t mention is that Israel claims that a Palestinian terrorist intentional rammed his vehicle into Israeli soldiers, injuring one and a responding soldier killed the assailant. At the very least, the Star should have featured Israel’s claims that the Palestinian was an attacker in attribution, failing which, this headline comes off as if Israeli soldiers killed a presumably innocent Palestinian motorist, who may have just had an accident and was killed by Israeli soldiers.

As it turns out, the car-ramming terrorist attacker had on his person a suicide note.

HonestReporting Canada has filed a complaint calling for corrective action with the Star’s Public Editor and awaits a reply. Stay tuned to this page for future updates.