On January 31, the Toronto Star published an Associated Press article with a headline that cast doubt that a Palestinian terrorist who wielded three knives and charged at an Israeli soldier was an attacker.

The headline uses the word “alleged” in scare quotes, whereas it’s an undisputed fact that the attacker tried to stab an Israeli soldier. 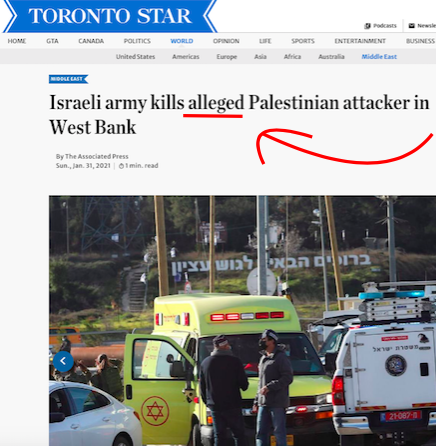 Video evidence confirms this attack and here are photos of the knives he wielded from the IDF:

WATCH: Another #Palestinian terrorist tried to stab an @IDF soldier at the Gush Etzion junction close to Bethlehem.

Thankfully, the charging #terrorist was neutralized.

Share this now… our media won’t report this! pic.twitter.com/4hF8g2oRhX

An armed assailant with 3 knives connected to a stick attempted to stab our soldiers who were operating at Gush Etzion Junction.

Our troops fired toward the assailant and neutralized him. No IDF injuries were reported. pic.twitter.com/y6DuVAX8b9

As there was no doubt about the veracity of this matter, HonestReporting Canada told the Toronto Star that the word “alleged” should be removed in the interests of fairness and accuracy.

We await the Star’s reply to our concerns. Stay tuned to this page for future updates.