In response to HonestReporting Canada’s complaint, the Toronto Star published the following clarification on November 27 to retract its falsely publishing that there are “Israeli-slash-Jewish-only roads”: 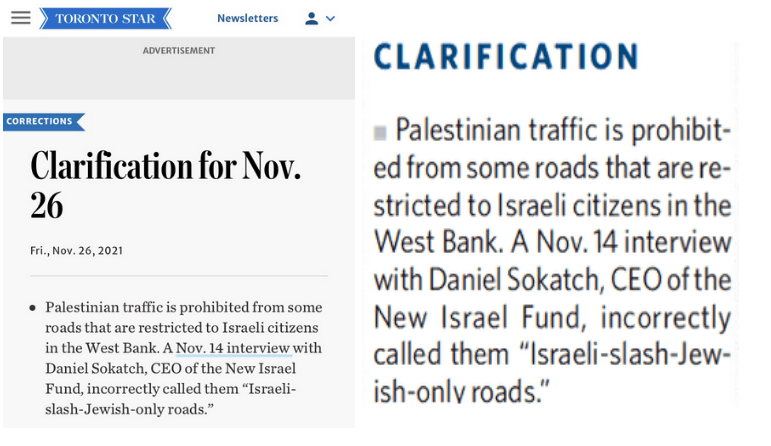 In a front-page feature-length article on November 14, the Toronto Star gave significant coverage to an interview with Daniel Sokatch, the CEO of the New Israel Fund (NIF), which claims to be a moderate, centrist organization promoting the cause of peace between Israelis and Palestinians. 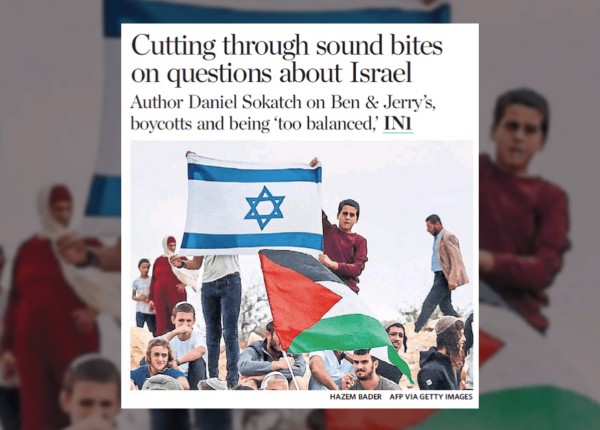 The NIF is a US based non-governmental organization with an annual budget in the tens of millions of dollars, and which, despite its name, funds a wide array of anti-Israel groups.

According to an audit produced by NGO Monitor, although NIF claims that it “firmly oppose[s] attempts to prosecute Israeli officials in foreign courts,” in practice the organization is accused of doing exactly that. NGO Monitor found that “NIF continues to fund NGOs such as Adalah, Breaking the Silence, +972 Magazine, and Physicians for Human Rights-Israel that are primarily active in campaigns that contribute to BDS and delegitimization.”

In Mireille Silcoff’s Toronto Star interview with Sokatch, she describes the New Israel Fund as a group that “focuses on democracy and equality for both Jews and Arabs — misunderstood by a left wing confused by its hard-Zionist-sounding name, and criticized by right-wing detractors for its policies.” But in reality, the NIF is accused of being far more anti-Israel than its misnomer name would suggest, but that doesn’t seem to resonate with Ms. Silcoff who expressed her affinity for Sokatch’s views via Twitter:

For example, the Boycott Divestment Sanctions (BDS) movement against Israel may portray itself as a nonviolent movement to achieve political ends, but its aim is to delegitimize the very concept of Israel as Jewish state, which according to the International Holocaust Remembrance Alliance (IHRA), is an example of antisemitic speech as it denies the Jewish people the right to self determination in their historic homeland. But that didn’t stop Sokatch from, in our estimation, whitewashing BDS and describing it as “a peaceful, nonviolent means for Palestinians trying to change a country,” a movement whose tactics are “perfectly reasonable and legitimate” and even comparing it to the civil rights movement in the United States.

It is of little surprise, then, that according to the NGO Monitor dossier of the New Israel Fund, around 10 percent of the organization’s grants go towards groups which demonize Israel and promote the BDS movement.

Sokatch rightfully acknowledges that Israel is a recipient of a disproportionate amount of attention in contrast to the broader Middle East, but then argues that apartheid exists in the West Bank, and refers to “Israeli-slash-Jewish-only roads,” but this is simply untrue. In fact, while there are roads prohibited to Palestinians in the West Bank, there are no “Jewish-only roads.” Israel’s Arab citizens and indeed, Israeli citizens of any religion or ethnicity, have just as much right to travel on those restricted roads as do Israeli Jews. Israeli Arabs frequently use the bypass roads for business and to visit relatives For the record, there are no “Jewish-only roads” in the West Bank. Certain West Bank roads are open to Jewish, Muslim and Christian Israeli citizens (whose vehicles have yellow license plates) but are off limits to non-Israeli residents of the West Bank (who have different plates). This false charge implied a racist policy on the part of Israel – allowing special privilege to Jews over other religious and ethnic groups – and is especially pernicious and erroneous.

In the interview, Sokatch also repeats the same claims that young Jews in the Diaspora are being turned off by Israel. But data simply doesn’t show this to be the case. While young Jews may differ politically from older generations when it comes to specific policies or politicians in Israel, their support for the existence of a Jewish State remains solid and very widespread.

One of the arguments that Sokatch repeated in the interview with Silcoff is how Israeli communities in Judea & Samaria (often called the West Bank) are an impediment to peace. He goes so far as to claim that if Israel halted construction of Jewish communities in Judea & Samaria, then “so much of the ill will germinating out there would evaporate.” But this is fantasy, and problematic for number of reasons. 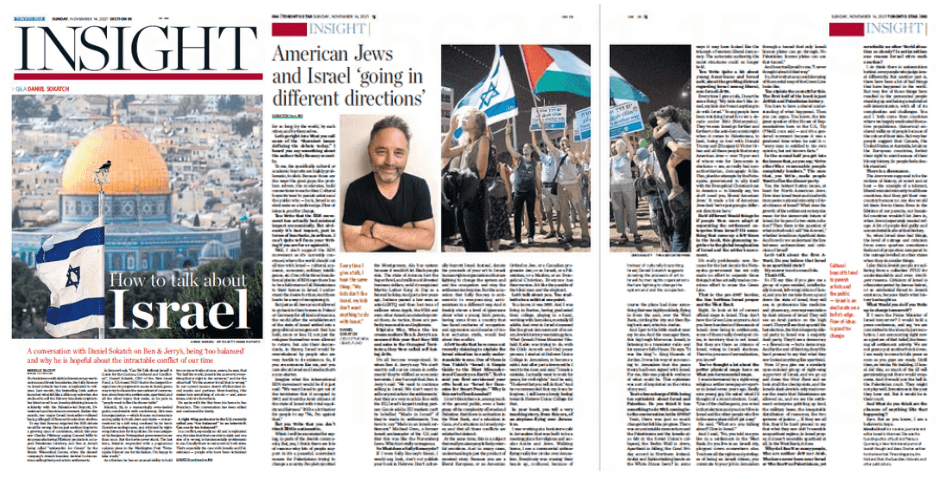 First, Israel has in fact made the offer to give up the Gaza Strip, eastern Jerusalem, and virtually all of Judea & Samaria in exchange for peace, most notably by then-Prime Minister Ehud Barak in 2000. But it was rejected by the Palestinian leadership. The rejection should make very clear that the “settlements” are not the obstacle to peace that they are often described as being. Also consider how when Israel uprooted 21 settlements and 8,500 settlers in Gaza in 2005, all it got in return was Palestinian terrorism.

Secondly, discussing Israel’s alleged illegal occupation of Judea & Samaria (West Bank) as a settled issue is intellectually dishonest. The Jewish people have three millennia of uninterrupted history, and even the word Jew originates from the land of Judea. Jews are hardly recent arrivals, or foreign occupiers. Judea & Samaria (and eastern Jerusalem) returned to Israeli control after the 1967 Six Day War, when Israel’s neighbours ganged up and attempted to destroy the young country.

Thirdly, Sokatch refers to the “Green Line” and says Israeli policies have sought to erase it, and even Silcoff erroneously refers to “the pre-1967 border, the line between Israel proper and the West Bank.” But the Green Line is no border at all, but merely an armistice line from 1949 which delineated where Israeli and Jordanian soldiers stopped fighting during Israel’s War of Independence. No party has recognized that line as an official border of any kind, and so using an unrecognized 72 year-old armistice line as a sacrosanct border is without any basis whatsoever.

Peace between Israelis and Palestinians will hopefully come one day, and sooner rather than later. But whitewashing the hateful BDS movement, funding anti-Israel organizations, and making baseless claims about Israeli communities allegedly being the obstacle to peace is simply not the way to go about doing it. The Palestinian leadership – and that includes both the Palestinian Authority and Hamas – need to accept Israel’s right to exist as a Jewish sovereign state, both in words and in deeds. That means state-sponsored hatred in Palestinian schools, mosques and official media outlets, not to mention firing 4,000 rockets on Israeli civilian targets, as Hamas did only six months ago, must halt immediately.

Take action now! The Toronto Star’s giving New Israel Fund CEO Daniel Sokatch a platform to portray his organization as a non-partisan organization fighting for peace between Israelis and Palestinians is intellectually dishonest, because in reality, his organization has, in our view, not only whitewashed BDS, but has been accused of actively funding groups who advocate for anti-Israel causes and the delegitimization of the Jewish state. Send a letter to the Star to voice your concerns at: lettertoed@thestar.ca.