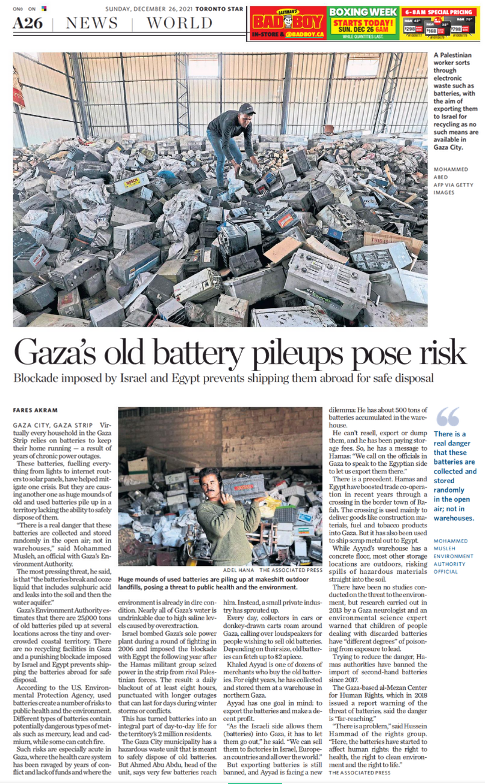 On December 26, the Toronto Star published a full page Associated Press wire  story entitled: “Gaza’s old battery pileups pose risk to health, environment,” which described how the coastal enclave has become awash with 25,000 tons of used batteries, which are posing an environmental threat to Gaza’s two million residents because of the chemicals they can emit.

According to the article, the vast majority of families in the Gaza Strip use batteries as a supplemental source of power, since power outages are a regular occurrence. But rather than identifying Hamas, the terrorist organization which runs Gaza, as the culprit behind the colossal mismanagement of its own people’s resources, the article all but absolves the Islamist terror group from any culpability at all. Worse yet, any blame which seems to be assigned is focused on, unsurprisingly, Israel.

Today, Israel supplies the Gaza Strip with power, much of it from a power station in the Israeli coastal city of Ashkelon. But that has not stopped Hamas from repeatedly firing rockets at Israeli power stations and pipelines, directly harming the very energy sources providing lifelines to Gaza.

While it has become depressingly common to blame Israel for all of the Gaza Strip’s woes, if the Toronto Star had reported on the pertinent details, the conclusion would have been inescapable: that Hamas’ fanatical obsession with destroying Israel has taken priority over everything, including caring for its own people.

Hamas’ complete disregard for its own population is far from a new development.

In the summer of 2005, as Israel prepared for the Gaza Disengagement, when it uprooted nearly 10,000 Israeli civilians from the Gaza Strip in a gesture of peace, thousands of former greenhouses belonging to Israeli farmers were purchased by international donors and given to its new Palestinian caretakers. But rather than use the state-of-the-art greenhouses to grow crops and assist in the development of Gaza’s economy, the buildings were used as staging grounds for the construction of terror attack tunnels, which allowed Hamas gunmen to infiltrate into Israel.

Hamas’ management of Gaza’s power crisis is no different. Hamas could, with the assistance of one of its many international benefactors, construct a new power plant which would provide much needed energy to the enclave. Hamas could also opt to stop its semi-annual practice of waging war on Israel, most recently as of this past May, which not only brought death and destruction to Gazans and Israelis alike, but also once again jeopardized Gaza’s fragile energy system. And Hamas could also, more generally, focus on proactively building its economy and required institutions and look to mimic Israel’s economic growth, rather than continue to hold Gazans collectively hostage to its fanatical Islamist ideologies.

Tragically, this seems unlikely without significant international pressure on Hamas to change its ways. Hamas, like Lebanon’s Hezbollah, or the Islamic Republic of Iran, fixates on the issue of Israel as a way to distract its people from its own colossal domestic failures. Israel is always a convenient scapegoat for Hamas’ leaders to point to as a way to avoid responsibility for their own criminal ineptitude.

But that abdication of responsibility can only be successful as long as the world lets Hamas get away with it. Holding Hamas responsible for its own actions, and for the welfare of its own people, starts with ensuring that the news media reports accurately and comprehensively on Hamas’ disinterest in taking care of Gazans.

Take Action Now: Gaza’s two million residents are paying a steep price for Hamas’ inhumane governance. That will only change when the media, here in Canada and abroad, starts calling out Hamas for its actions and inactions, and starts demanding that the international community applies pressure to Hamas and its benefactors in the Arab world to take action against its cruel disinterest in Gaza’s population. Send a letter to the editor to the Toronto Star now to convey these concerns: lettertoed@thestar.ca.