HonestReporting Canada (HRC) is tasked with monitoring the media, exposing inaccuracy and bias in Canadian reporting on Israel and the Mideast region, and importantly, we recognize and commend news organizations for exceptional reporting.

Today, we are pleased to be able to commend the Toronto Star – a news outlet which we have often criticized for problematic reporting of Israel – for its having produced front page news coverage today of recent Palestinian efforts to incite hatred against Israelis.

As reported by Toronto Star reporter May Warren today, Israel seized thousands of tiny rock-holding dolls at the Haifa Port which it says were destined for someone in the Palestinian Authority, which would likely be distributed and/or sold to thousands of Palestinians.

Here’s the full report that was published on the prominent and prestigious front page of Canada’s most read daily newspaper: 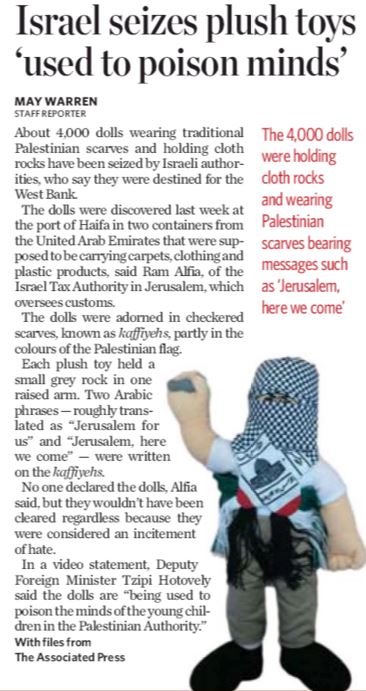 HRC has long called for Canadian media outlets to cover Palestinian efforts which incite hatred and encourage Palestinians to commit terror attacks on Israelis. All too often, this issue is omitted from Canadian news coverage and this matter goes out of sight and out of mind. 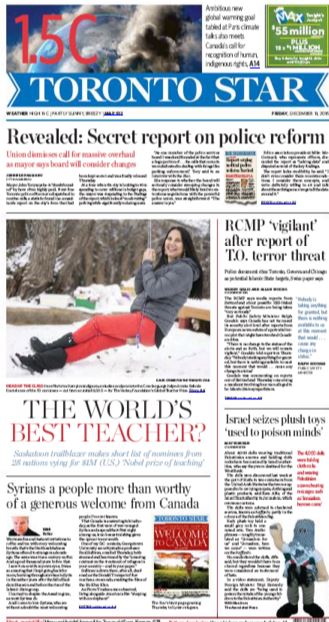 That the Star covered this matter, and that it gave prominent placement to this story – which was likely read by thousands of people – is deserving of praise.