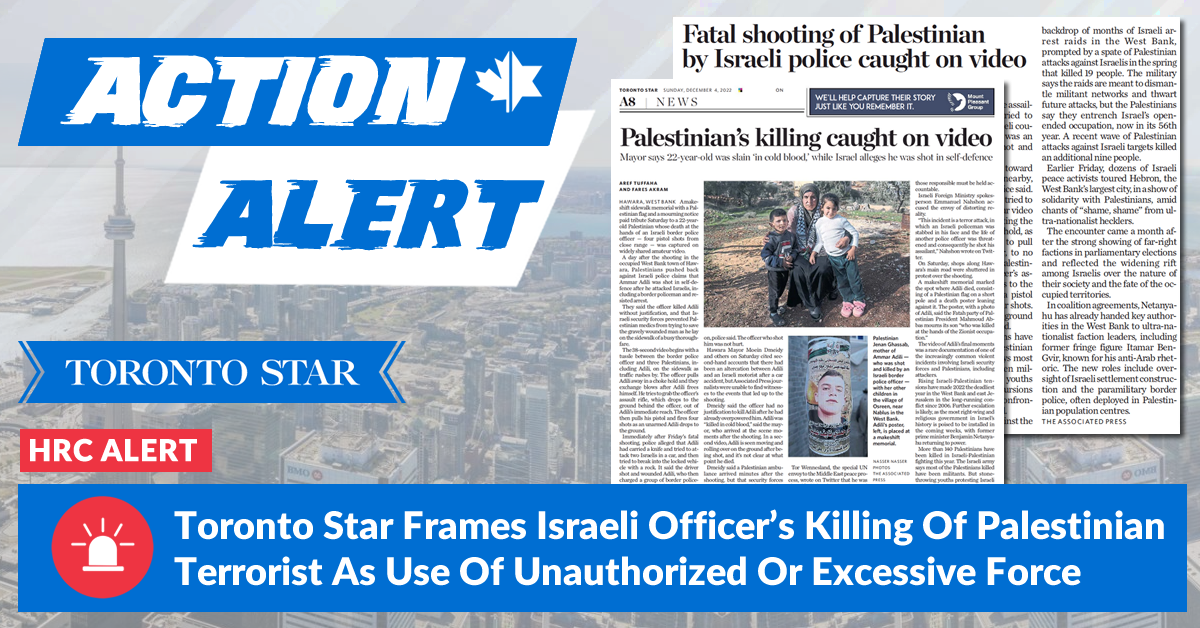 In back-to-back days on December 3 and 4 respectively, the Toronto Star’s print edition produced coverage that framed an Israeli officer as having used excessive or unauthorized force against a presumably innocent Palestinian, whereas video footage confirms that a Palestinian terrorist assailant allegedly tried to stab Israeli motorists and then proceeded to stab an Israeli border officer in the face and tried to steal the officer’s gun, which led to him having to act in self defense by killing the terrorist at point-blank range.

The Star’s headlines focused on a “Palestinians’ killing…” and the “Fatal shooting of Palestinian…” but did not mention that he was 1) an armed terrorist assailant with a knife, 2) had carried out a stabbing attack, and 3) had fought with the arresting officer and tried to steal his assault rifle.

Israeli Police noted that the officer, “Fearing for his life and the well-being of others in the vicinity, the officer shot the terrorist and neutralized him.”

The incident, according to the Star “occurred in occupied West Bank town of Hawara,” and the Star focused on how Palestinians were “mourning” and created a “makeshift memorial” for the dead terrorist, 22-year-old Ammar Adili. The report failed to question why Palestinian society would mourn and make memorials for a terrorist who attempted to murder innocent Israelis.

The Associated Press report published by the Star said that (emphasis added): “They said the officer killed Adili without justification, and that Israeli security forces prevented Palestinian medics from trying to save the gravely wounded man as he lay on the sidewalk of a busy thoroughfare.”

However, this claim is unsubstantiated, but that didn’t stop AP and the Star from publishing it. According to Israeli Police: “The terrorist was neutralized and his death was determined on the spot.” 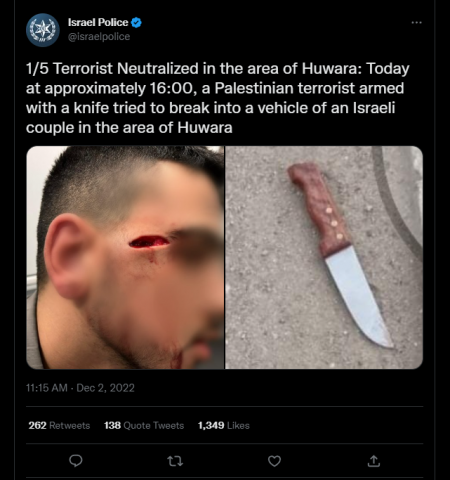 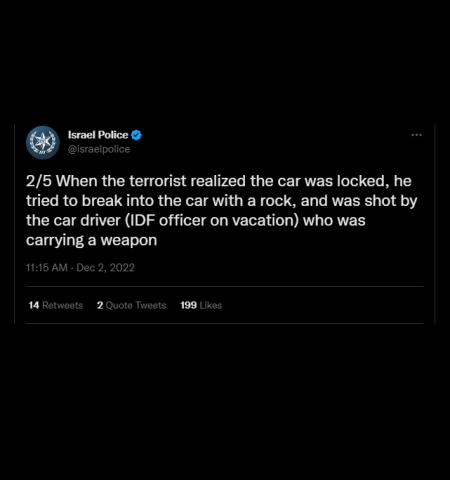 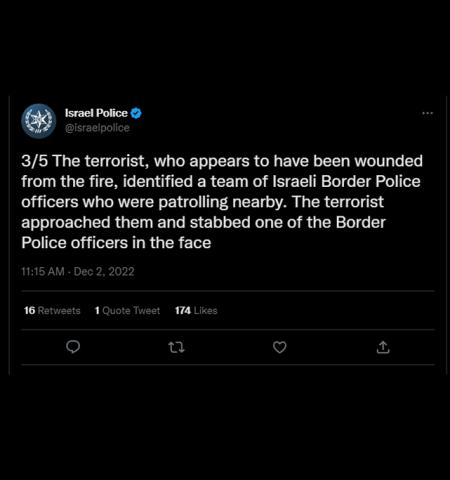 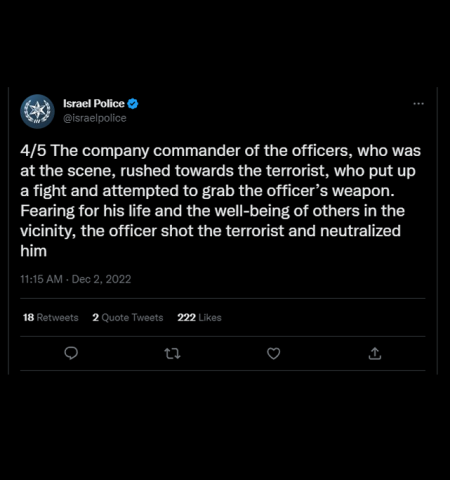 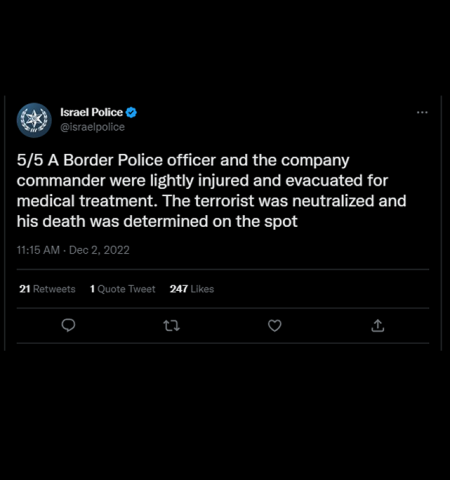 It’s noteworthy that the Star’s December 2 online headline acknowledged the “alleged stabbing”. The headline said in full: “Israeli officer kills Palestinian after alleged stabbing,” but the print version’s headline merely referred to the “Fatal shooting of Palestinian by Israeli police caught on video.” 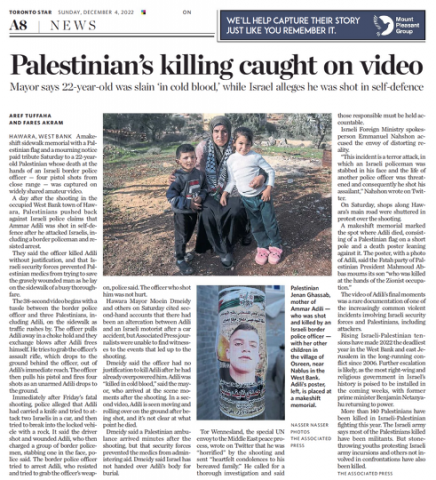 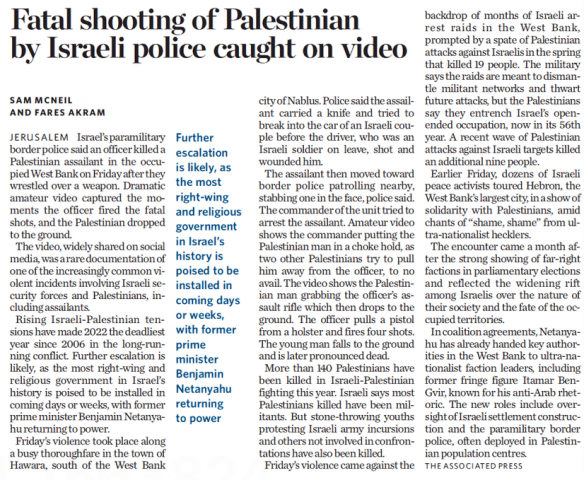 Why did Star’s editor not include this vital context in its headlines? As is commonly known, readers see headlines 3:1 over the adjacent article and many people will only see the headline and not read the corresponding article to get a full primer of the incident, hence why it’s of absolute necessity to feature necessary context in headlines.

As it stands, it behooves the Star to set the record straight and prominently acknowledge that Israeli Police claim, and video confirms, that this Palestinian was a terrorist who tried to murder Israelis with a knife that he wielded, and an Israeli officer acted in self-defense and neutralized the terrorist, after he tried to steal his gun.