Toronto Star Fails to Disclose that Dead Palestinian Was Attacker 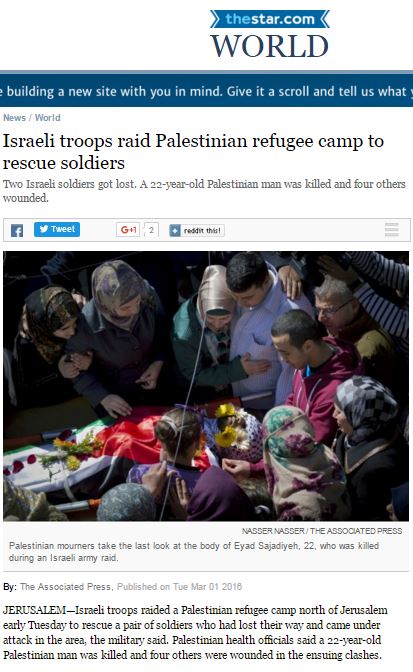 In the article’s sub-head, photo caption and lead paragraph, it’s reported that a Palestinian man was killed by Israeli forces who shot him in the head during this raid. What wasn’t relayed to TheStar.com readers is that according to the Jerusalem Post, the 22-year-old Palestinian who was killed during the violence, Eyad Sajadiyeh, “was shot dead, after he shot a Border Police officer in the knee.”

As we told the Toronto Star on March 2, this is important context that we were hopeful the Star would mention by amending this article. The fact that the Israelis claim they were acting in self defense when they were shot at as they believed their lives were at risk. Failing which, Star readers may wrongly conclude that a presumably innocent Palestinian man was killed by Israeli forces. Whereas it’s claimed that this Palestinian (and others) initiated hostilities/violence against the lost Israeli soldiers.

Responding to our concerns, the Star’s Public Editor, Kathy English, stated the following to HRC on March 11:

“I have now had opportunity to consult with the Canadian Press, Associated Press and our foreign team.

There is no error here and we do not see strong reason  to edit the story as you suggest.”

HonestReporting Canada respectfully disagree with the Star’s perspective. Simply mentioning that clashes took place does not negate the fact that readers could wrongly come to the conclusion that the dead Palestinian was an innocent bystander caught up in the crossfire of the ensuing clashes. In fact, he was a combatant who initiated hostilities by shooting an Israeli soldier in the knee. Why would the Star – when given the opportunity to do so – elect to not disclose this vital context by simply amending this article? The Star’s failure to do so was deeply regrettable.