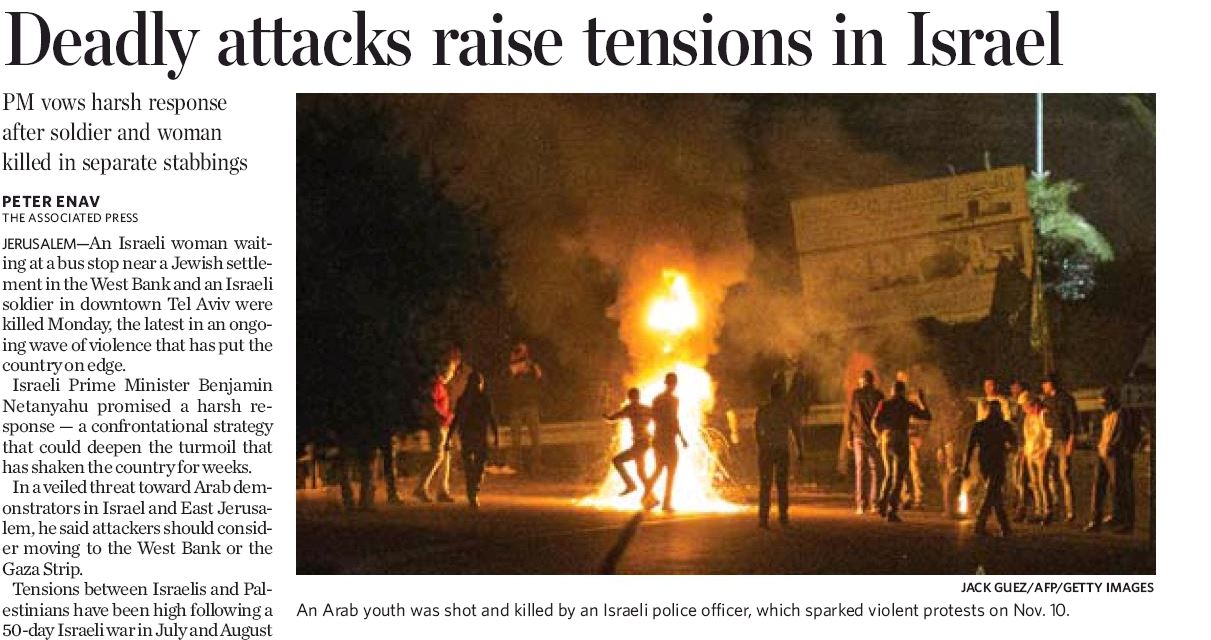 Of specific concern, the article noted the following: “Israel’s Arab minority — 20 per cent of Israel’s population — also has been brought into the mix. Monday’s violence followed the fatal shooting of an Arab Israeli by a policeman early Saturday in the northern Arab Israeli town of Kfar Kana, and the release of a video that appeared to show the man backing away from police when he was shot. The shooting sparked violent demonstrations in Kfar Kana. The police internal investigations department is looking into the shooting to determine whether proper protocol was followed.”

Meanwhile, a Getty Images photo caption said only the following in relation to this incident: “An Arab youth was shot and killed by an Israeli police officer, which sparked violent protests on Nov. 10”.

In an HRC complaint sent to Toronto Star Public Editor English, we expressed our concern with the fact that the Star did not provide context to this incident by specifically mentioning that this individual was clearly wielding a knife and was attacking the officer. You can view a video of the incident here or on the image below:

We told the Star that we appreciate that it didn’t write the article or the caption itself, but that we presume that the Star takes responsibility for anything it publishes and packages.

In Israel, this incident is being hotly debated, some, like Israeli Prime Minister Netanyahu and Economy Minister Naftali Bennet have defended the officer, while others have condemned the shooting as not following protocol. Haaretz says: “Police insist that officers’ lives were in danger when the man attacked a police car with a knife, but footage indicates officers may not have followed protocol.”

We await the Star’s response to our concerns. Stay tuned to this page for a future update.