In Jerusalem and in areas of the west bank today, five Palestinian terrorists carried out brazen shooting and knife attacks with the intent of murdering Israeli security forces and presumably, the civilian population at large.

Averting a potential massacre and acting in self defense, Israeli forces shot dead the five Palestinian assailants. In some cases, returning fire after being shot at by Palestinian gunmen.

How did Canada’s media cover these attacks?

The Toronto Star published the following misleading and unfair headline on page A12 in today’s world news section: 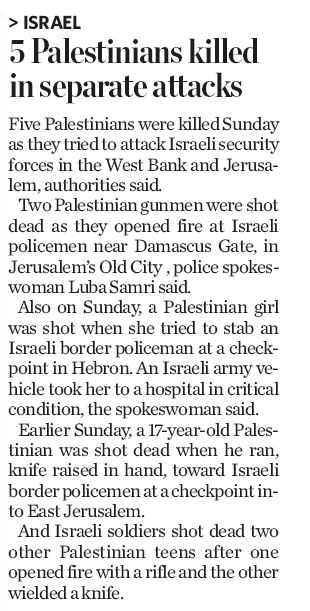 This headline was marred by the fact that it failed to mention that these 5 Palestinians initiated several shooting and stabbing terror attacks on Israeli forces. The false impression left by

this headline was that 5 presumably innocent Palestinians were killed in attacks with Israeli forces. This headline therefore made the guilty party innocent and the innocent party guilty as it did not include vital context about the nature and origin of the attack. The headline could have easily read: “5 Palestinian attackers killed by Israeli forces”.

As HonestReporting editor Daniel Pomerantz noted recently: “This stands in stark contrast to the way similar events are covered all over the world. Imagine a 9/11 headline stating, “Fifteen Saudi men killed in America…”  or a Paris headline saying, “Middle Eastern men killed by French Police…”  In this kind of situation, where people are under attack, a headline that emphasizes the death of the terrorists is misleading to the point of offensive.”

While the body of the Star’s article was accurate, however, readers view headlines 3:1 over the adjacent article. As a result, many Star readers were likely misled by this headline into thinking that Israel killed 5 innocent Palestinians.

Last but not least, CP24’s coverage of these attacks also turned the Palestinian terrorists into victims of Israeli aggression.

Today’s coverage was headlined “Three teens killed by Israeli troops in two separate incidents,” a headline which altogether failed to mention that the three teens were Palestinian terrorists. CP24’s anchor led the report with emphasis on the “death of three Palestinian teenagers” while stating as fact that the three Palestinian teenagers were killed and shot by Israeli officers. Importantly, Israel’s claims that their forces acted in self defense was stated in attribution only.

To watch the full CP24 report please click here or on the image below and see the full transcript immediately below: 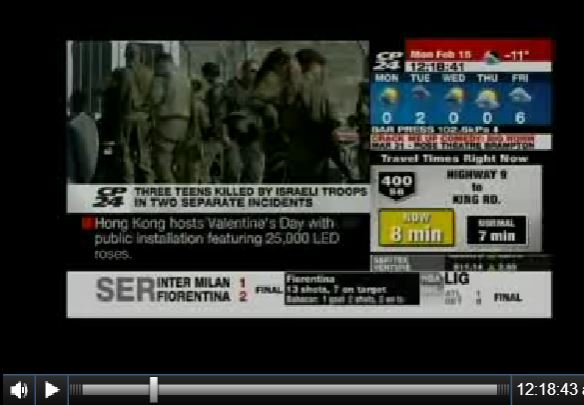 Anchor: “Violence across the west bank today has resulted in the death of three Palestinian teenagers. In one incident, a 17-year-old Palestinian was fatally shot by an Israeli officer at a checkpoint near Bethlehem. According to Israeli police, the teen was running towards the checkpoint with a knife. Earlier in the day, two fifteen year olds were killed by Israeli forces near the city of Jenin. the Israeli military said one of them opened fire on troops patrolling in the area.”

If you’re angered by the Toronto Star’s and CP24’s coverage which turned these Palestinian terrorists into victims, please communicate your concerns to the Star and CP24 and call for corrective action to be undertaken to set the record straight. Please send emails to the Star’s Public Editor at: publiced@thestar.ca and CP24 now@cp24.com.