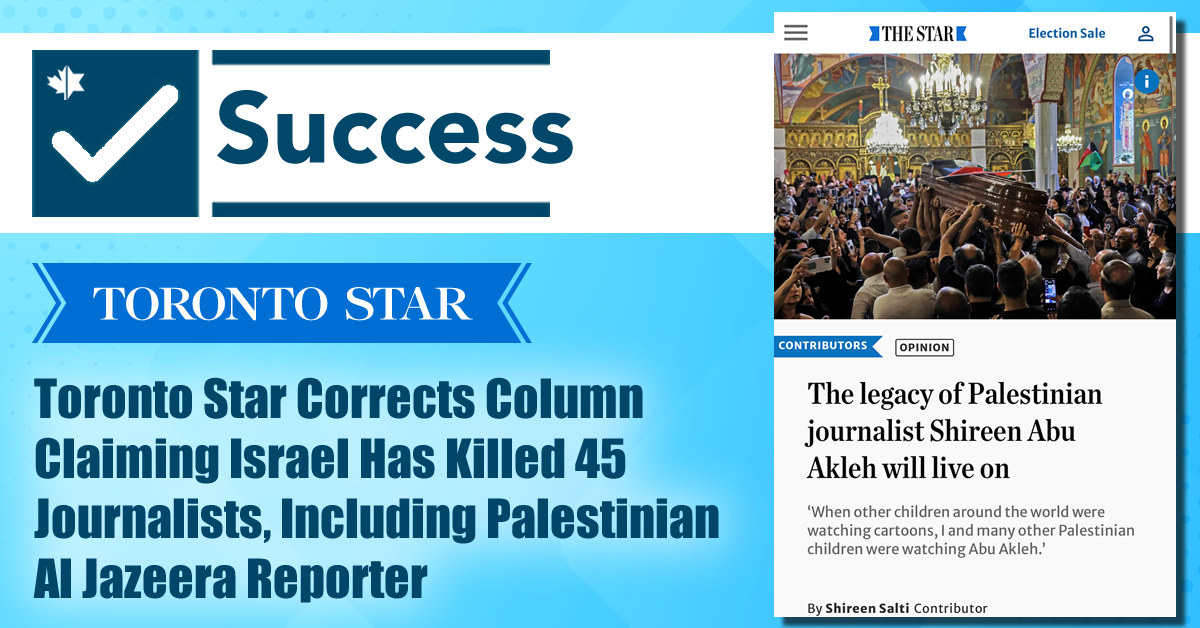 Despite how the culpability of who killed Al Jazeera journalist Shireen Abu Akleh is still unknown, that hasn’t stopped anti-Israel detractors from trying to usurp the platforms of major media outlets to try to assert that Israeli soldiers were responsible for her death.

Case in point, on May 13, the Toronto Star published a commentary to its website by Shireen Salti, former executive director of the Canadian Arab Institute, entitled: “The legacy of Palestinian journalist Shireen Abu Akleh will live on”.

In her op-ed, Ms. Salti wrote that the “… trail-blazing Palestinian journalist, was killed by an Israeli soldier while reporting on an Israeli army raid in Jenin in the occupied West Bank. A sniper shot her in the neck, despite being clearly identified as a journalist and nowhere near any shooting or armed Palestinians. Abu Akleh’s producer was also shot and wounded.”

Salti also said: “And now she is gone, her powerful voice silenced by an Israeli sniper’s bullet. In fact, Abu Akleh was the 45th journalist killed by Israeli soldiers since 2000.”

While Ms. Salti is entitled to her own opinions, she’s not entitled to her own facts. Who killed Shireen Abu Akleh has not been substantiated, and both Israeli and Palestinian investigations are inconclusive at this point. Did an errant Israeli bullet kill the Palestinian-American journalist, or, did gunfire from Palestinian terrorists kill Abu Akleh? The veracity of this matter is still unknown, but despite this, Ms. Salti claimed outright that Shireen was “killed by an Israeli soldier… a sniper shot her in the neck… silenced by an Israeli sniper‘s bullet.”

Just as it would be wrong for someone to pen an op-ed claiming outright that it was a Palestinian terrorist’s bullet that killed Abu Akleh, it was wrong to claim outright that IDF fire killed her.

Furthermore, Ms. Salti was not there when this incident occurred and she does not know, and cannot claim definitively, that Abu Akleh wasn’t “near any shooting or armed Palestinians.” The hyperlink to the Star’s commentary led only to a claim made by B’tselem, using their own methodology, not an independent and objective forensic and ballistic analysis. Additionally, it must be noted that B’tselem’s anti-Israel bias has been well-documented.

Furthermore, the claim that Israeli soldiers have killed 45 journalists was not attributed to an objective source. The link in the Star’s op-ed cited a claim from the Palestinian Ministry of Information. Meanwhile, the Washington Post and Time Magazine recently cited the Committee to Protect Journalists which said that: “At least 19 journalists have been killed in Israel and the Palestinian territories since 1992, according to the New York–based Committee to Protect Journalists (CPJ).” It’s noteworthy that the CPJ doesn’t assign responsibility of these deaths to Israelis, it just says they were killed in crossfires or while on a dangerous assignment.

HonestReporting Canada takes no issue with Ms. Salti being given a platform to comment on this issue by the Star, and, if given the opportunity, we would vigorously defend her right to do so and for the Star to give her space, but we take serious issue with the errors that were contained in her op-ed which we felt must be corrected.

In response to our complaint, the Toronto Star edited this column by adding a statement from Al Jazeera blaming Israel for Abu Akleh’s killing, as well as including additional details of the investigation. Furthermore, the number of journalists who have been killed was attributed to the International Federation of Journalists, but which does not blame, nor state as fact, that Israel was responsible for all 47 deaths.

An editor’s note appended to this column now states:

Editor’s note — May 17, 2022: This column was edited to include the statement by Al Jazeera blaming Israeli forces for Shireen Abu Akleh’s death as well as to add several details about the investigation. As well, it was edited to add the concerns of the International Federation of Journalists.

This column was amended to now say the following:

“On Wednesday, Shireen, my namesake and a veteran, trail-blazing Palestinian journalist, was killed while reporting on an Israeli army raid in Jenin in the occupied West Bank. Al–Jazeera said that Israeli forces deliberately targeted Abu Akleh despite being clearly identified as a journalist and nowhere near any shooting or armed Palestinians. Abu Akleh’s producer was also shot and wounded.”

“When other children around the world were watching cartoons, I and many other Palestinian children were watching Abu Akleh — listening to her tell the stories of Palestinians struggling for their freedom and rights. And now she is gone, her powerful voice silenced, evidently by an Israeli sniper’s bullet. In fact, Abu Akleh was the 47th journalist killed since 2000, according to the International Federation of Journalists, which has accused Israel of deliberately targeting reporters.”

Importantly, based on the corrective action taken, the Star acknowledges that it’s wrong to definitively claim that Israeli soldiers killed this Palestinian journalist and it’s wrong to assert that Israel has killed 45 journalists.

We thank the Toronto Star for its cooperation.