Gabor Matés July 22 Toronto Star oped comparing the situation in the Gaza Strip to the Warsaw Ghetto, crossed the line of fair opinion to hateful discourse.

Matés commentary not only unfairly maligned the state of Israel, it also exploited the Holocaust through contemptible comparisons between the Nazis and the Jewish state. By publishing Matés column, the Toronto Star has regrettably legitimized his bigoted views and provided him with a platform to spew his vile anti-Israel propaganda to a large audience.

Matés comments are inherently racist, and his comparison is beyond the pale and was a grotesque distortion of history. Israel faces a foe which is trying to wipe it from the map. The Hamas terror group has fired over 2,000 rockets at Israel in the past two weeks, and close to 20,000 in the past decade. Yet, Matés screed ignored Israel’s legitimate security concerns. Most perniciously, Matés sordid attempt at linking the situation in the Gaza Strip to the suffering that Jews endured in the concentration camps during the Holocaust and in their terrible experiences in the Warsaw Ghetto was contemptible. The reason the Warsaw Ghetto analogy was used is to trump up a libellous claim that Jews, who were once the victims of the Nazis during the Holocaust, are now the victimizers carrying out the genocide of Palestinians. It should be noted that comparisons of contemporary Israeli policy and actions to that of the Nazis fits the European Union’s, Ottawa Protocol’s, and U.S. State Department’s working definition of anti-Semitism.

Gabor’s Gaza-Warsaw Ghetto comparisons certainly do not hold up to scrutiny and while constructive criticism of Israel is certainly legitimate, Mr. Mate’s comments crossed the line.

Please write a letter to the Toronto Star to voice your concerns. Letters should be sent to: lettertoed@thestar.ca 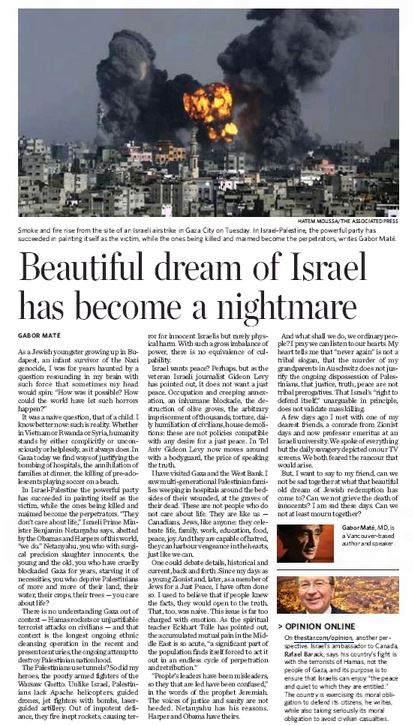