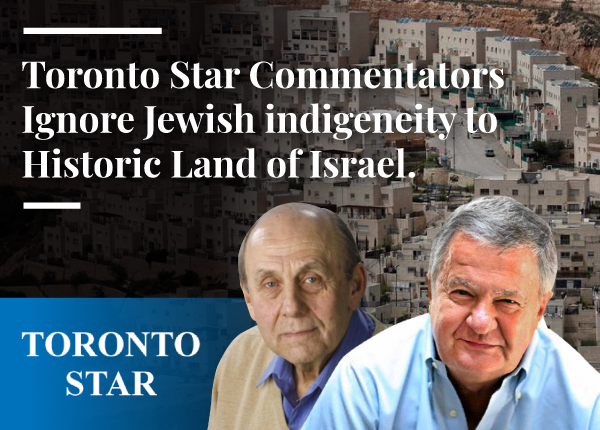 In back to back editions of the Toronto Star on June 26 & 27, commentators Tony Burman and Rick Salutin (both in-house critics of Israel), produced polemics which singled out the Jewish state for condemnation and which ignored Jewish indigeneity to the historic land of Israel.

Beginning July 1, in defiance of international law but encouraged by Donald Trump, Israeli Prime Minister Benjamin Netanyahu is planning to annex perhaps as much as 30 per cent of the occupied West Bank to make permanent the illegal Israeli settlements that he has allowed to develop on Palestinian land.”

To wit, the Palestinians do not and have never had sovereignty over the lands in question and Israel says international law enshrines its rights to these areas, while citing the need for defensible borders and biblical, historical and political connections to the

Burman’s piece referred to Israeli PM Netanyahu as “Israel’s most audacious land-grabber,” claiming that Jews are illegal occupiers who committed a “land grab”. This claim is without foundation and implies that Israel and the Jewish people’s connection to Israel is illegitimate. According to international law, these lands were promised to the Jewish people in the San Remo Resolution in 1920 which led to the establishment in British- 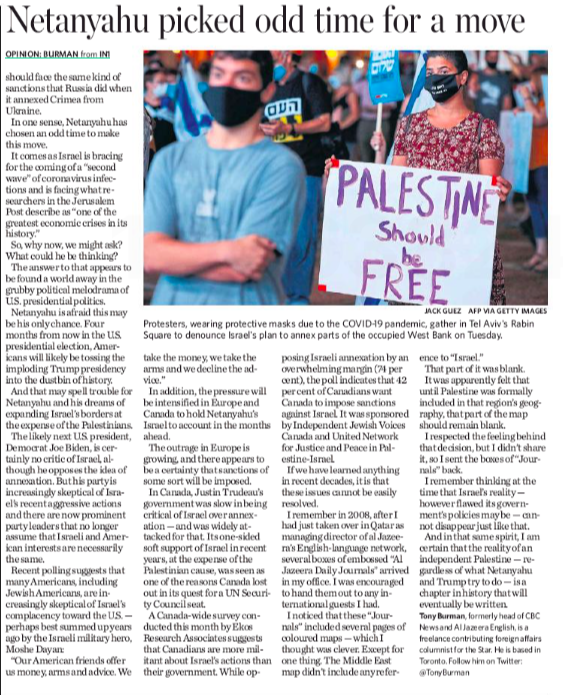 It would seem to ensure that thousands of Palestinian residents in these newly annexed territories would be granted neither citizenship nor equal rights.”

No, the plan is for Israel *not* to apply sovereignty to areas which Palestinians live. Furthermore, Burman’s raising the spectre of Israel turning into an “apartheid” state like South Africa is inflammatory and unfounded.

Instead of publishing a pro-Israel view on the topic, the Star elected to publish the following letter on July 1 condemning Israel’s plans to apply sovereignty to Judea and Samaria: 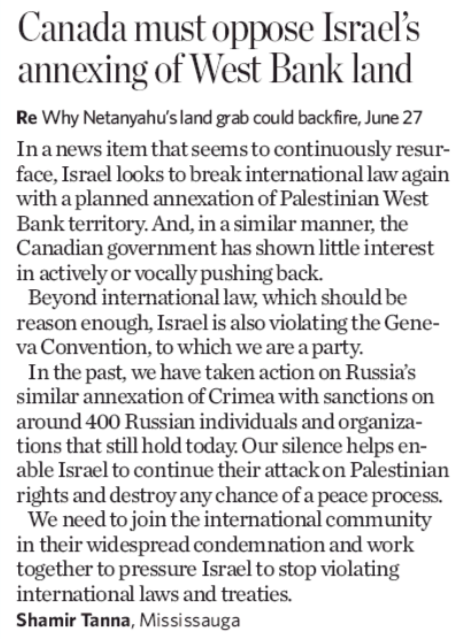 Contrary to this letter, the territorial dispute between Israel and the Palestinian-Arabs is not analogous to Russia’s occupation of Ukrainian Crimea. Russia was the clear aggressor who broke international law by taking Crimea by force. In 1967, Israel won the Six Day War in self defense while facing genocide and annihilation by warring Arab armies. It took the west bank and the eastern portion of Jerusalem from Jordan who illegally occupied the areas in question from 1948-67, and Gaza from Egypt and the Golan Heights from Syria. Israel concluded peace treaties with Egypt and Jordan, both who renounced claims to Gaza and the west bank. On what basis can it be said that Israel is “occupying” Palestinian land?

As to Salutin, his screed sought to blame Israel for Canada’s not winning a seat on the UN Security Council due to Canada’s pro-Israel policies. 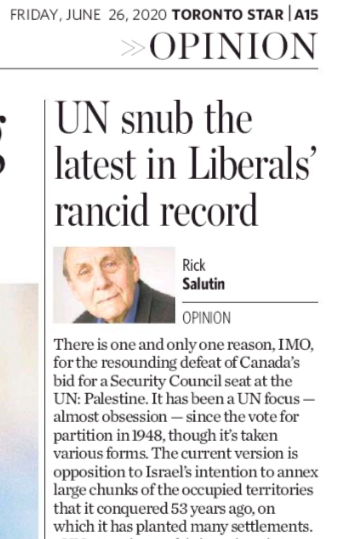 Salutin’s lead paragraph says it all:

There is one and only one reason, IMO, for the resounding defeat of Canada’s bid for a Security Council seat at the UN: Palestine. It has been a UN focus — almost obsession — since the vote for partition in 1948, though it’s taken various forms. The current version is opposition to Israel’s intention to annex large chunks of the occupied territories that it conquered 53 years ago, on which it has planted many settlements.”

Not surprisingly, Mr. Salutin has forgotten that there never was a sovereign ruler over these disputed lands. Israel liberated these areas from Jordanian occupation in a defensive war against belligerent Arab aggressors in 1967. It’s clear that Israel’s actions were absolutely legal under international law and the laws of war. As well, there’s no element of international law that can be used to prohibit the voluntary return of individuals to the towns and villages from which they or their ancestors had been previously evicted by forcible means.

Make no mistake, Jews are indigenous to the historic land of Israel and have lived there, uninterrupted, for over 3,000 years. Sadly, these Toronto Star commentators are obtuse to this historic truth.