Following HonestReporting Canada’s March 23 media action alert which responded to a Toronto Star columnist who smeared Israel as an “apartheid” state that same day, today, the Star published the following letter from an HRC subscriber countering the odious slur and explaining why you can’t equate Israel with “Apartheid”. 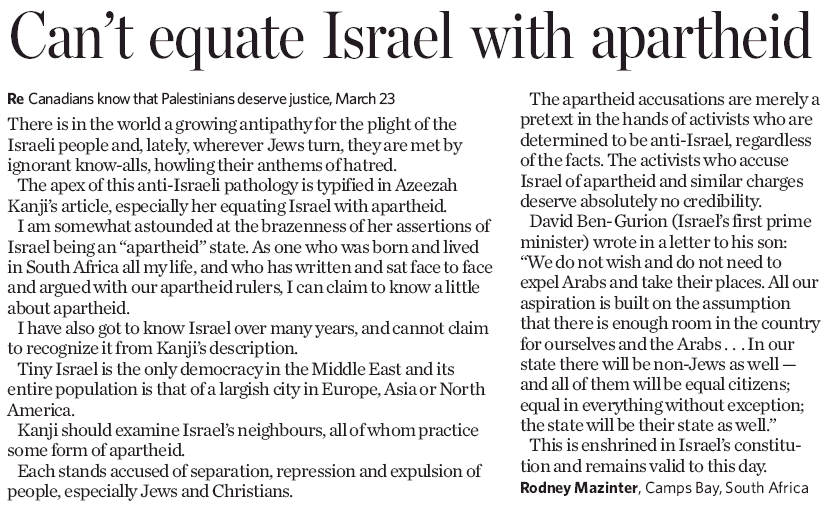 In a column published in the Toronto Star today, Azeekha Kanji’s smearing Israel as an “apartheid” state is baseless, lacks substantive argumentation and is wholly disingenuous. Kanji employs empty rhetoric to tarnish Israel’s reputation and to isolate only the Jewish state with boycott, divestment and sanctions (BDS) campaigns. 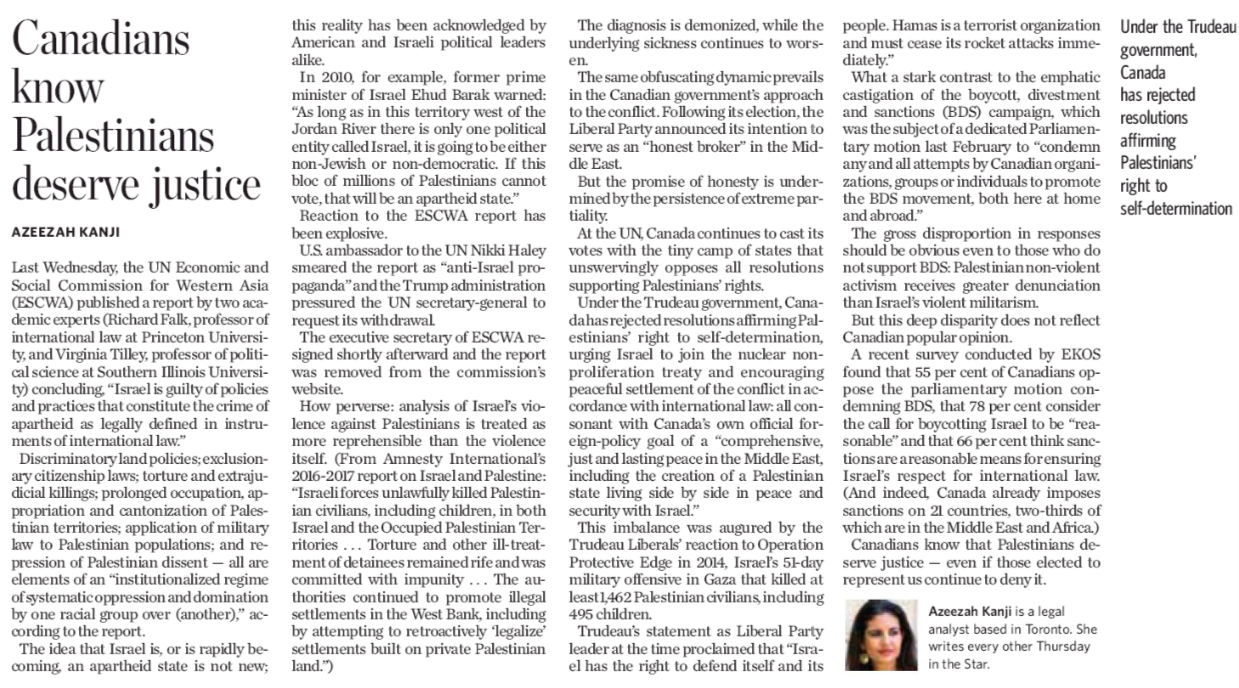 Don’t Israelis deserve justice? Faced with relentless Palestinian terror in the form of thousands of deadly rockets fired at its cities, which endures daily car-ramming and stabbing attacks of the likes that we saw at the British parliament yesterday, and whose many foes (Hamas, Hezbollah, ISIS and Iran) are committed to its destruction.

Importantly, Prime Minister Trudeau’s principled support for Israel is deserving of praise, not opprobrium by Kanji. Trudeau’s standing with Israel and confronting systemic bias at the United Nations, condemning the BDS movement, and deploring the pernicious rise of antisemitism, should be lauded – not lamented.

Untold by Ms. Kanji (a self-proclaimed “legal analyst”), the United Nations Economic and Social Commission for Western Asia (ESCWA) report was written by notorious antisemite Richard Falk, whom she regards as an “academic expert”. According to UN Watch, Falk was denounced on repeated occasions by former UN chief Ban Ki-moon and other world leaders for espousing 9/11 conspiracy theories, blaming the U.S. and Israel for the Boston Marathon bombing, and for spreading antisemitism. Even the Palestinian leadership considers Falk “a partisan of Hamas.”

The report by this Beirut-based UN agency of 18 Arab states which accused Israel of “apartheid” is categorically false and defamatory and explains why it was removed by the UN itself. In a speech delivered at the United Nations, Hillel Neuer, the Executive Director of UN Watch, ridiculed the report by noting that: “Israel’s 1.5 million Arabs, whatever challenges they face, enjoy full rights to vote and to be elected in the Knesset, they work as doctors and lawyers, they serve on the Supreme Court.”

But what about the hundreds of thousands of Jews who were ethnically cleansed from Arab countries like Egypt, Iraq, Jordan, Kuwait, Lebanon, Libya and Morocco?

“Where are your Jews?” says Neuer. Indeed!

And let us not forget the words of Palestinian President Mahmoud Abbas who said: “I will never allow a single Israeli to live among us on Palestinian land.”

"Algeria, where are your Jews?" — Hillel Neuer silences the U.N.

TAKE ACTION NOW: When baseless accusations are left unanswered, they risk becoming accepted as conventional wisdom. Azeekha Kanji’s smearing Israel as an “apartheid” state deserves to be forcefully rebuked. Please send a letter to the editor to the Toronto Star now:  lettertoed@thestar.ca.

Read HonestReporting Canada’s primer in the Huffington Post on the “10 Reasons Israel is not an “Apartheid” State”.