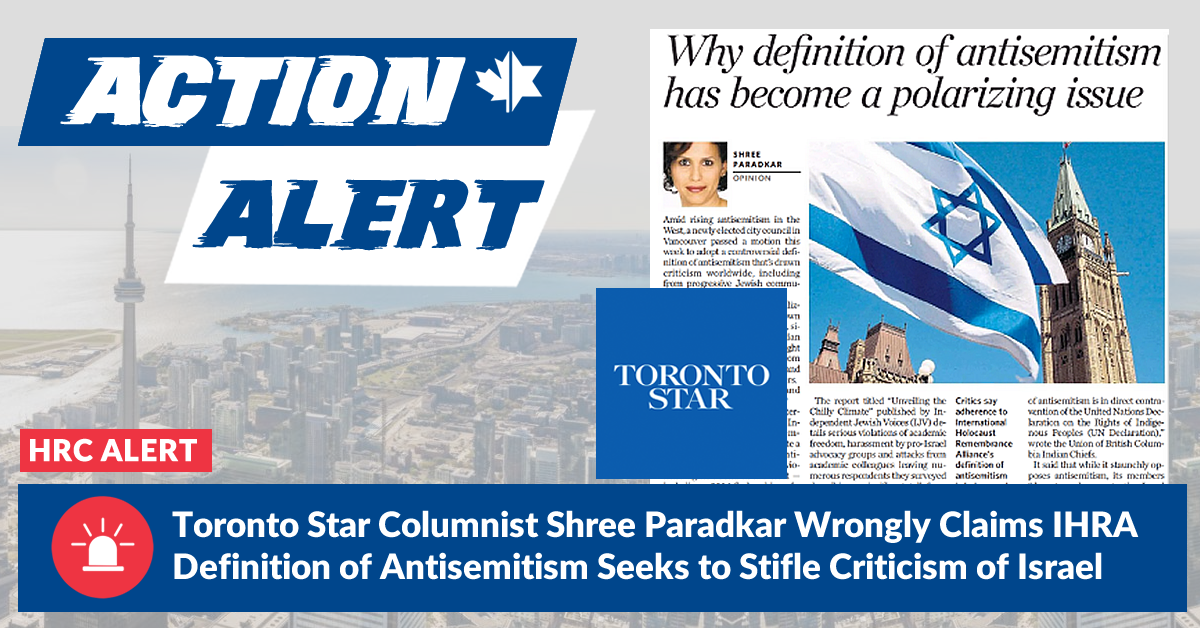 UPDATE: Following our alert last week of Toronto Star columnist Shree Paradkar wrongly claiming that the IHRA definition of antisemitism seeks to stifle criticism of Israel, one of our subscribers, Marcia Zalev, was published in the Saturday Edition of the Star: 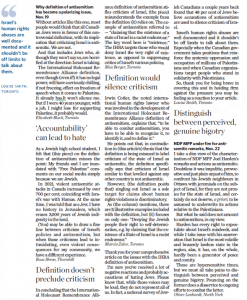 Definition would silence criticism
Irwin Cotler, the noted international human rights lawyer who was involved in the development of the International Holocaust Remembrance Alliance definition of antisemitism, explains that, “to be able to combat antisemitism, you have to be able to recognize it, to identify it, and to define it.” He points out that, in contradiction to (this article’s) thesis that the definition is being misused to label criticism of the state of Israel as antisemitic, the definition specifically says that criticism of Israel similar to that levelled against any other country is not antisemitic. However, (the definition posits that) singling out Israel as a sole target for claims about human rights violations is discriminatory. As (the column) mentions, there are 11 illustrative examples included with the definition, but (it) focuses on only one: “Denying the Jewish people their right to self-determination, eg by claiming that the existence of a State of Israel is a racist endeavour.”

The IHRA definition, which was formally created in 2016 by dozens of countries, with the support of mainstream Jewish communities – of all political stripes and from around the world – seeks to clarify what antisemitism is, so it can be effectively countered.

Approving the legally non-binding definition aims to create an additional “practical and educational tool” in the fight against antisemitism, according to Vancouver city council’s motion, which was brought by Councillor Sarah Kirby-Young.

In the days following the adoption, some voices in the news media have mischaracterized and misrepresented the nature of the IHRA definition.

In one particularly egregious example, in a November 18 column in the Toronto Star entitled: “Why definition of antisemitism has become a polarizing issue,” columnist Shree Paradkhar inaccurately describes the IHRA definition and also gives a prominent platform to opponents of the definition, who similarly misrepresent it.

For example, citing one of the illustrative examples used by IHRA to demonstrate contemporary examples of antisemitism – that claiming the existence of Israel is a racist endeavour – Paradkhar writes that the definition “is being quickly used to label criticism of the state of Israel as antisemitic.”

She also rhetorically asks “why is it that we can criticize Canada and other countries for their racism, but any such criticism of Israel can be too easily dismissed – and penalized when this definition is adopted by governments or other institutions – as antisemitic?”

Such concerns are a red herring.

This clear and unambiguous statement, freely available on IHRA’s website – that criticism of Israel does not constitute antisemitism – nevertheless has somehow escaped Paradkar.

Tragically, this mischaracterization of the IHRA definition represents only the tip of the iceberg of the problems in Paradkar’s opinion article.

In her column, Paradkar, a non-Jew who the Star allowed to opine as a supposed authority on antisemitism, then proceeded to quote an assortment of organizations known for their anti-Israel animus, including Canadians for Justice and Peace in the Middle East (CJPME), Independent Jewish Voices (IJV), the Union of BC Indian Chiefs, and the Canadian Association of University Teachers, who expressed their opposition to the IHRA definition.

Citing these fringe organizations in their disapproval to adopting the IHRA definition is not only irrelevant; it is profoundly 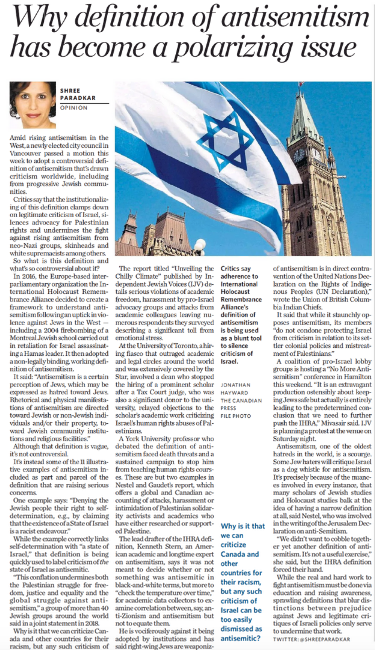 As recognized by the Vancouver city council, anti-Jewish hate remains stubbornly high around the world, and in Canada, Jews represent the country’s largest target of religiously-motivated hate crimes.

But quoting a motley group of organizations for their take on what does and does not constitute antisemitism is absurd. The Jewish community, as the victims of antisemitism, has widely supported the IHRA definition, and as such, it is axiomatic that the Jewish community define for itself what it sees as Jew-hatred. Furthermore, IHRA has been adopted by 35 countries worldwide, Canada included, along with the provinces of Alberta, New Brunswick, Ontario, Quebec and, most recently, Manitoba, along with the Global Imams Council and English football’s Premier League.

One can only imagine the – rightful – condemnation which would surely erupt if an assortment of non-Black associations spoke out against a widely-accepted definition of anti-Black hate, or a collection of non-LGBTQ+ groups condemned an internally-supported definition of what constitutes homophobia in contemporary society.

This should be no surprise. Jews, as the exclusive targets of antisemitism, have a right to define antisemitism without having their own concerns stripped away and delegitimized by completely unrelated organizations.

Paradkar quotes the Union of BC Indian Chiefs, who say in a statement that it does not “condone protecting Israel from criticism in relation to its settler colonial policies and mistreatment of Palestinians.”

As made clear by IHRA, criticism of Israel – even based on disinformation and easily debunked claims of alleged colonial policies – does not constitute antisemitism. But how would the Union of BC Indian Chiefs react if the Jewish community, or any other community for that matter, began opining on what the definition of anti-Indigenous bigotry should be, and shouldn’t be?

Importantly, it was only last year that we condemned Shree Paradkar for peddling in what we regarded was antisemitic tropes by her suggesting that Israel is to be blamed for American police using excessive force and being racist. In a May 2021 column, Ms. Paradkar held the Jewish state, and tacitly the Jewish people as a collective, responsible for alleged American police racism and unlawful use of force. This was bona fide antisemitim as the IHRA definition of antisemitism holds that an act is antisemitic when: “You accuse Jews as a people of being responsible for real or imagined wrongdoing committed by a single Jewish person or group, or even for acts committed by non-Jews.”

The tacit implication of Paradkar’s recent column is that Jews do not have the right to define Jew-hatred, or at least, any more than anyone else does. For a progressive columnist, this is a truly shocking approach, and is the de facto delegitimization of the Jewish lived experience.

In short, Paradkar’s central thesis that IHRA undermines the fight against antisemitism, rather than fight it, is especially dangerous as it seeks to deny Jews agency to confront those who persecute us.