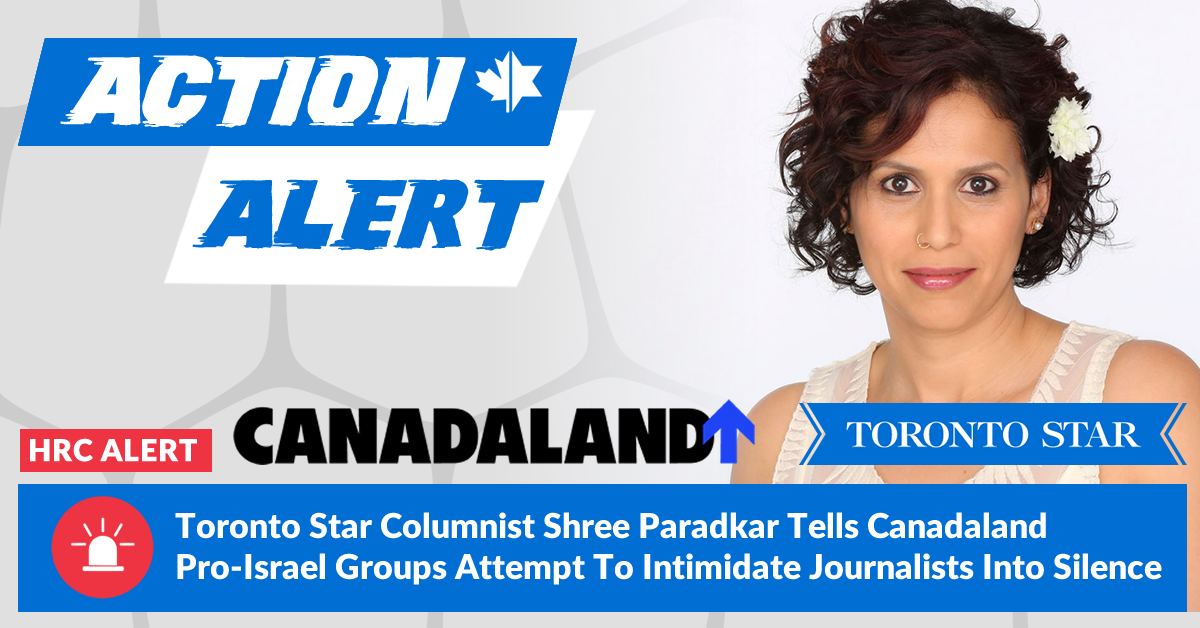 The definition, adopted by dozens of countries including Canada in 2016 and subsequently adopted by several provincial governments and municipalities, seeks to clarify antisemitism in the modern era, when Jew-hatred often hides behind a thin veneer of Israel-hatred.

As such, the definition, in addition to providing a basic meaning of what constitutes antisemitism, outlines 11 examples of how hatred towards Jews can manifest in contemporary society, including the denial of the Jewish right to self-determination.

In her column, Paradkar falsely claimed that the definition stifled legitimate criticism of Israel, alleging that such criticism could be “penalized” following the adoption of the IHRA definition.

HonestReporting Canada took Paradkar to task with an urgent community alert, pointing out her significant misrepresentations of the IHRA definition.

But that was not Paradkar’s final word on the matter.

Joining Canadaland.com’s podcast on their December 1 episode, Paradkar spoke with host Jonathan Goldsbie about her column and the widespread backlash against it. Goldsbie, who identified himself as “a white Jewish guy myself,” said that: “… in some ways, Jews are more firmly ensconced in whiteness and its attainted privileges than ever before, while at the same time have now been racialized with a frequency and to an extent that hasn’t been the case in decades…” Of course, as Whoopi Goldberg now knows, while the majority of North American Jews may be Ashkenazi with Eastern European roots, but Jews also come from China, Ethiopia, India and beyond and are of all colours. Northern African, Spanish and Portuguese Jews are predominantly Sephardic, while Mizrahi Jews come from throughout the Middle East and the Arab world; whether from Iraq, Syria, Iran, Yemen, etc.

With respect to Shree Paradkar, regrettably, rather than using the opportunity to correct some of the misinformation published in her recent column, she dug her hole even deeper.

Paradkar began the segment by referring to the criticism she faced regarding her column as “predictable,” alleging that the “pushback” she received was due to a campaign of intimidation.

“Journalists are reluctant to wade into any criticism of Israel…I know why, it’s because the pushback is hard, it’s fast…it is meant to be a deterrent,” she told Goldsbie.

This lack of self-awareness is quite striking. Rather than engage in self-introspection and address the crux of the criticisms of her column, namely that the IHRA definition explicitly states that “criticism of Israel similar to that leveled against any other country cannot be regarded as antisemitic,” and not, as asserted by anti-Israel critics, a cudgel by which to stifle debate on the Israel-Palestinian conflict and protect Israel from legitimate criticism, Paradkar simply played the victim.

Paradkar continued to avoid addressing the core criticisms of her column, continuing to attack a straw-man caricature of who she presumes her critics are; in her words, “right-wing, pro-Israel lobby groups.”

While she has claimed otherwise, criticizing Paradkar’s misrepresentation of the IHRA definition is not an issue for only one side of the political spectrum. Diverse provincial governments from British Columbia to New Brunswick, and a growing number of local municipalities, have adopted the definition, because it is a worthwhile tool in identifying the modern reincarnation of antisemitism.

One of the other major criticisms of Paradkar’s original column attacking the IHRA definition is that, like any form of hatred or discrimination, it is axiomatic that only the targeted party can and should define that hatred for themselves. In this case, Jews have the right to define antisemitism.

While Paradkar acknowledges that “what I didn’t want to do in this column is to be myself, an arbiter of whether something is antisemitic or not,” she then continues in the interview by doing exactly that, blithely telling Goldsbie that “One can reject Zionism without being antisemitic.”

This is akin to acknowledging that only members of the LGBTQ+ community can definite hatred towards their community, but then nevertheless defining it for that community anyway.

Despite the widespread misunderstanding of what Zionism is, the definition is quite straightforward: the Jewish People’s movement of self-determination in their historic and ancestral homeland, Israel and the resumption of Jewish sovereignty in the land of Israel. Anti-Zionism is the belief that the only people in the world that can’t have a state are the Jews. Ergo: Anti-Zionism is antisemitism.

Regardless of her intentions, Paradkar’s column contained a number of misrepresentations of the IHRA definition, and she failed to make any corrections or acknowledge any shortcomings in her piece during her interview with Goldsbie.

As she concluded the interview, Paradkar once again positioned herself as a martyr fighting on behalf of the oppressed, arguing that “right now, the power dynamic is so skewed in favour of Israel, and the oppression of Palestinians has become so unbearable…”

It is unclear by what metrics Paradkar is basing her assumption that the “power dynamic” is tilted towards Israel or that there exists a “chilling effect” on journalists. Paradkar’s own experience is a demonstration of the complete opposite of this claim:  she is a columnist at Canada’s highest-circulation daily newspaper, where she freely wrote an anti-Israel column, and by her own admission, her employer, the Toronto Star, “has my back.”

Paradkar’s interview with Goldsbie in the Canadaland.com podcast gave her an opportunity to correct her manifold errors and misrepresentations present in her Toronto Star column. Unfortunately, not only did she fail to do this, she continued to dig in her heels.

The podcast interview consisted of more than just a discussion of IHRA; it also featured an extended discussion about HonestReporting Canada’s impact and effectiveness and our alert about Paradkar’s column. Goldsbie said HRC is a “very effective advocacy organization, they’re very effective at what they do… there’s a comprehensiveness to what they do… it’s a very well setup advocacy organization… they’ve really figured out how to affect change with the media” and offer “actually great advice” as it relates to activism and media monitoring.

HonestReporting Canada is proud that its efforts continue to be acknowledged and recognized as effective.