Rick Salutin’s contention in a February 19 column that “the new anti-Semitism… doesn’t target Jews but Muslims — given the Semitic roots of Islam” must be categorically rejected. 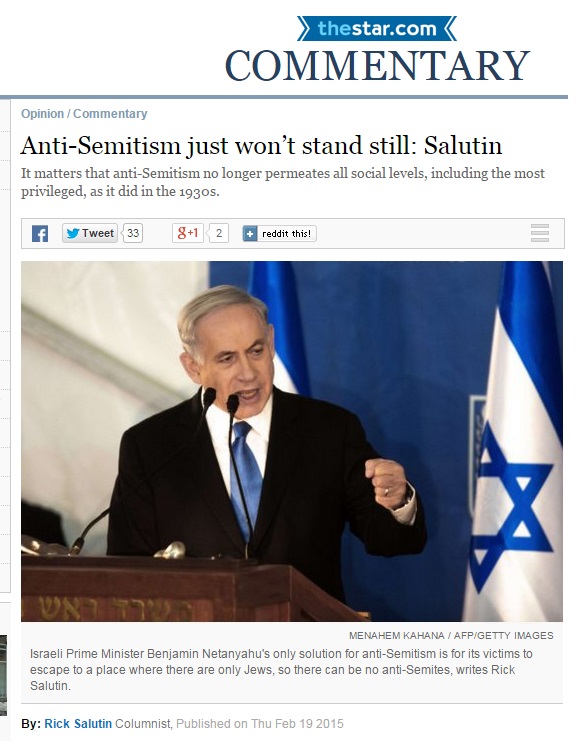 Antisemitism, both new and old, is defined as the hatred and hostility directed exclusively to the Jewish people. When Jews, individually or as a collective, are discriminated against or assaulted for no other reason than they are Jewish. Antisemitism is baseless, it’s a pernicious evil that represents a global threat not only to world Jewry who are the “canaries in the coal mine,” but to mankind everywhere.

When the government of Canada took the historic step of signing the Ottawa Protocol to Combat Antisemitism, Canadian parliamentarians of all political stripes recognised the increasing and alarming tide of antisemitism in Canada and throughout the world and importantly, set out a strategic plan to stop the spread of this virulent hatred. The new antisemitism includes the denial of the right of the Jewish people to self-determination in their historic homeland, the State of Israel. It includes the denial of the Holocaust and stipulates that those who accuse Jews of being Nazis are committing antisemitism. Meanwhile, classic antisemitism persists when Jews continue to be on the receiving end of blood libels and conspiracy theories, while individuals steadfastly propagate the Protocols of the Elders of Zion libel, vandalize Jewish institutions, or as we saw in France recently; the toppling and destruction of 300 Jewish graves.

At present, antisemitism is on the rise and its being felt most acutely in Europe. Think of the murder of a Rabbi and three school children in Toulouse France in 2012, the killing of four innocents at a Jewish museum in Belgium, and most recently the attacks at the Hyper Cacher kosher supermarket in France and a synagogue in Copenhagen. The European Jewish Press reports that the number of antisemitic incidents in Britain has reached the highest level ever recorded, with reports of violence, property damage, abuse and threats against members of Britain’s Jewish population more than doubling in 2014, with 1,168 antisemitic incidents compared to 535 incidents in 2013.

Finally, Rick Salutin is wrong in claiming Israel is a “place where there are only Jews”, instead, Israel’s population is ethnically, racially, and religiously diverse with people from all faiths, (Muslims, Christians, etc) and Israel proudly boasts that 20% its population are Arabs.