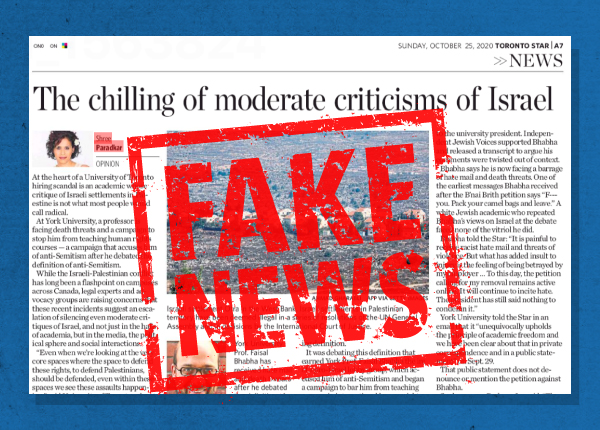 On October 25, Toronto Star Columnist Shree Paradkar claimed that a chill has descended on Canadian university campuses when it comes to the Arab-Israeli conflict. As evidence, she cites two recent cases of academics being criticized for their views of Israel which she describes as being “moderate”.

While Ms. Paradkar, the Star’s “Race and Gender Columnist,” is entitled to her views, sadly, she misses the forest for the trees in her analysis of what’s happening on campuses across Canada.

Firstly, it’s important to draw a distinction between what Ms. Paradkar terms a “moderate critique” of Israel and what went beyond legitimate criticism of Israel and which verged into borderline hate speech. York University professor Faisal Bhabha, who complains that his university has not publicly defended him against a campaign to have him fired, publicly equated Zionism with “Jewish supremacy.” That is, of course, a grotesque lie. Zionism is the Jewish people’s strive for self-determination in their historic homeland, and when Professor Bhabha misrepresents it as repugnant and akin to white supremacy, he not only tarnishes the vast majority of Canadian Jews, he also applies a bizarre double standard: Palestinian self-determination is acceptable, but Jewish self-determination is racism. This isn’t “moderate” criticism, and his saying it was possible that Israel is “exaggerating the Holocaust” is textbook antisemitism.

As to Dr. Valentina Azarova, she’s not merely a “critic” of Israel as she supports and advocates for the “one-state solution” which is a thinly veiled strategy for destroying the State of Israel and questioning its very right to exist. At its most basic level, the one-state solution denies the right of Jews to self-determination in their historical homeland and calls into question the very legitimacy of Israel as a state. A bi-national state would have the same consequence as the “right of return” – the negation of Israel as a Jewish state. Palestinians, by virtue of a higher birthrate, would turn Jews into a minority before voting in favor of another Muslim Arab state in place of Israel.

This is precisely why the International Holocaust Remembrance Alliance Definition of Antisemitism is critically important. When individuals deny the inherent right of the Jewish people’s self-determination and call for Israel’s destruction, that is itself antisemitic. Anyone is entitled to their own beliefs, but spreading dangerous lies about Israel and the Jewish people is certainly not a “moderate critique.”

On that note, it’s concerning that this Toronto Star column failed to acknowledge that two sources quoted and referenced: Azeeza Kanji and Professor Emeritus Larry Haiven, are both members of pro-Palestinian organizations. For example Ms. Kanji is a Board Member of CJPME, an anti-Israel organization in Canada, while Mr. Haiven is a member of Independent Jewish Voices (IJV), another anti-Israel group. (HonestReporting Canada has communicated this concern directly to the Toronto Star).

Secondly, when it comes to discussion of the Arab-Israeli conflict on campus, there is indeed a chilled atmosphere, but not in the way that Ms. Paradkar describes. Indeed, while there’s indisputably a poisoned environment taking place on colleges and universities, the consistent victims are not those voices critical of Israel, but consistently those who refuse to adopt an anti-Israel viewpoint.

Only two years ago, a graduate student at the University of Toronto Munk School of Global Affairs was denied a meeting with a prospective doctoral supervisor “on ethical and academic grounds” because he was involved in pro-Israel efforts on campus.

The year before that, a social work student at Ryerson University, was told by a placement coordinator that completing her co-op placement at a Jewish Community Centre would be inappropriate because the organizations’ values seemed to be “in opposition” to those of the School of Social Work.

In 2016, I was told by the Student Association (SA) of the University of Ontario Institute of Technology (UOIT) & Durham College that I was not welcome to be present during “Social Justice Week” on campus because of my affiliation to pro-Israel education.

Sadly, there are far more cases and incidents than can be itemized within this space. The challenges facing pro-Israel students aren’t limited to the classroom. In fact, some of the most vicious and often violent anti-Israel activities take place at the hands of student clubs and organizations. Last year, Jewish students were assaulted by anti-Israel activists at a pro-Israel event at York University.

For close to 20 years, the Boycott, Divestment Sanctions (BDS) movement against Israel has willfully chosen to ignore indescribable human rights abuses and violations around the world, only to dishonestly and maliciously target the Middle East’s only liberal democracy, Israel. This can manifest itself as either week-long hate fests intimidating Jewish and pro-Israel students under the guide of “Israel Apartheid Week,” or in violent riots, whether at York or as they took place in 2002 when Israeli Prime Minister Netanyahu came to Concordia University.

These toxic trends on college and university campuses aren’t an anomaly; rather, they are tragically representative of Canada at large. According to the most recent hate crimes report from Statistics Canada, Police-Reported Hate Crimes in Canada, 2018, reported that the number one target of hate crimes in Canada were Jews. Despite only representing slightly over one per cent of the overall Canadian population, Canadian Jews were the target of nearly one in five hate crimes.

Clearly, Canadian campuses are supposed to be spaces where a free exchange of ideas can take place among intellectually open and curious students. Whether in the classroom, campus media, or in student government, there should be the opportunity and freedom for students and staff alike to share their views in respectful and cordial manners.

But whatever free exchange of ideas is taking place on Canadian campuses is being overshadowed by the intimidation and de-legitimization of both Israel and any supporters of the Jewish State. Whether committed by student groups, professors or student unions, the demonization and double standards being applied to Israel and any of its supporters will continue to be a black stain on higher learning in Canada.

Will Ms. Paradkar comment on the intimidation of pro-Israel students on Canadian campuses? We wait with baited breath.