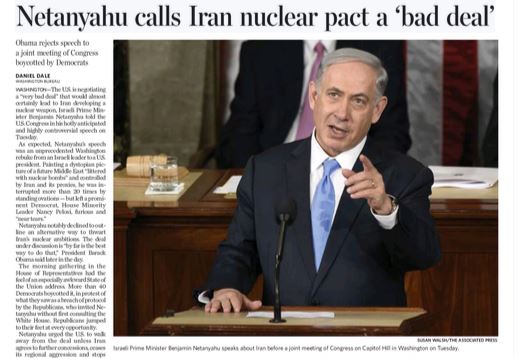 In the March 4 edition of the Toronto Star, reporter Daniel Dale made the following erroneous statement in an article he authored: “Netanyahu notably declined to outline an alternative way to thwart Iran’s nuclear ambitions.”

This statement mirrors U.S. President Barack Obama’s contention that Netanyahu offered no “viable alternatives” to the emerging agreement with Iran, but Mr. Dale’s statement is not an inherent fact.

In truth, and as Reuters via the Globe and Mail points out, Netanyahu says he gave a “practical alternative” to the Iran deal. The report says that following: “The alternative to the present ‘bad deal’ is not no deal, still less war, but ‘a much better deal,’ using the threat of sanctions, if not to dismantle Iran’s nuclear program altogether, than to keep it within much stricter limits than currently envisaged. Any relaxation of the sanctions should be contingent on good behaviour — not only on the nuclear file, but across the board. As Mr. Netanyahu noted: ‘Why should it change for the better when it can enjoy the best of both worlds, aggression abroad and prosperity at home?'”

Meanwhile, on CBC the National on March 3, reporter Neil MacDonald, in conversation with Peter Mansbridge, noted that Netanyahu’s “alternative” to the deal includes “more sanctions” and the threat of a “military strike”.

Netanyahu argued that a practical alternative to the current deal can be done by imposing tougher restrictions on Iran’s nuclear program. Any deal that would ease restrictions on Iran, Israel argues, would have to be linked to its fundamentally disavowing terror.

Haaretz reports that in his speech to Congress, Netanyahu claimed he “offered a practical alternative. My alternative will, on the one hand, extend by years Iran’s nuclear weapon break-out time, should it decide to violate the agreement, by putting in place more stringent limitation. The alternative that I put forward to Congress also proposes that sanctions against Iran not be lifted automatically until such time as it stops spreading terrorism across the globe, stops its aggression against its neighbors and stop threatening to destroy Israel.”

Meanwhile, the New York Times reported that: “While criticizing the proposed time frame of 10 years or so for the agreement, calling that the ‘blink of an eye in the life of our children,’ he suggested that Mr. Obama add more conditions, namely forcing Iran to renounce terrorism, aggression against its neighbors and threats to Israel’s survival. Such conditions would not have to be met before the agreement is signed, he said, but only by the time it expires. The nuclear limits imposed by the agreement would then remain in effect after 10 years if Iran did not live up to such commitments, under this proposal.”

We asked the Toronto Star to take corrective measures to remedy their reporter’s error and we are pleased to note that Canada’s largest circulation daily newspaper, the Star, issued the following clarification today which set the record straight:

HonestReporting Canada commends the Toronto Star for its prompt and professional issuance of this important clarification.