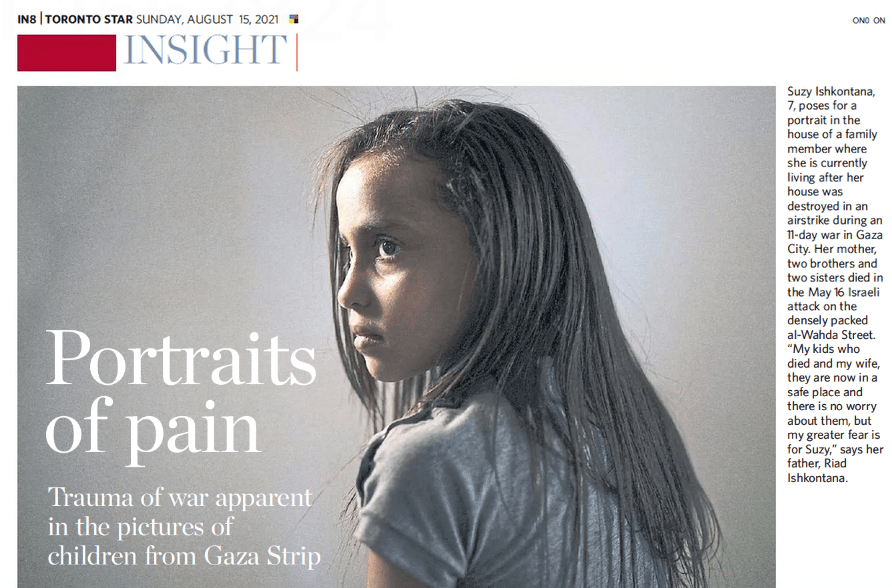 In the Toronto Star on August 15, a feature-length Associated Press (AP) report was published on the plight of Gazan children, particularly during the last armed conflict between Hamas & Israel (“Portraits of Pain: Traumas of war apparent in the portraits of children from Gaza Strip.”).

While there is certainly no dispute that these children in Gaza have suffered undue hardships due to the recent war and tragically, a powerful and visually arresting article like this – without relevant context – serves not to clarify and educate Canadians on the Arab-Israeli conflict, but rather to confound by creating a superficial depiction of a complex reality on the ground.

The article which profiled a number of children in the Gaza Strip who have suffered psychological and other traumas as a result of armed conflict, not only fails to provide valuable insight about the conflict, but serves to mislead and obfuscate the reality, but not because of what was included, but because of what was omitted.

The article reported that “Gaza’s Health Ministry says 66 children were killed in the fourth war on the Gaza Strip — most from precision-guided Israeli bombs, though in at least one incident Israel alleges a family was killed by Hamas rockets that fell short of their target.”

First, it bears mentioning that Gaza’s “Health Ministry” is in actuality an arm of Hamas, so anything reported by this source must be taken with extreme caution and skepticism.

Second, the war was not “on the Gaza Strip;” it was by Hamas on Israel.

Third, the article reports that Israel alleges that an errant Hamas rocket killed a Gazan family. This is extremely misleading. Even Palestinian Human Rights Groups and the notoriously anti-Israel group Human Rights Watch said Hamas was the culprit in those deaths, while Israel says about a third of the Gazan youth deaths were at the hands of Hamas.

While readers were given a detailed image of these children’s suffering, nowhere in the more than 3,000 words published was there any indication as to the larger context of the war between Hamas and Israel.

Hamas, the Islamist terrorist organization which runs the Gaza Strip after winning a civil war there in 2007 against rival Fatah, has turned the entire coastal enclave into its personal fiefdom, stealing humanitarian resources meant for its own people, and regularly trying to murder Israeli civilians. Hamas, whose founding charter calls for the destruction of Israel, mercilessly spreads propaganda and hateful incitement against Jews and Israel, and has the blood of untold thousands of Israelis on its hands, whether through suicide bombings or rocket attacks against Israeli cities, 4,000+ of which were fired at Israel in the 11-day conflict. 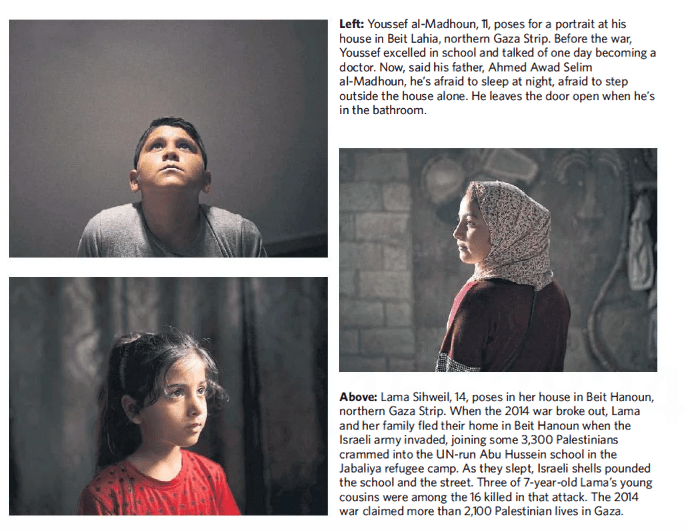 It is against this backdrop that the most recent war between Hamas and Israel must be understood. In the face of merciless rocket attacks against its cities, Israel was forced to respond to Hamas’ aggressions, and defended itself, as it was duty bound to do.

Critics may point out that an article about psychological traumas faced by children in the Gaza Strip is no place for a detailed backgrounder on the conflict between Hamas and Israel, but in reality, without this context, a deeply personal and heart wrenching article like this does not further anyone’s understanding of the conflict, and in fact does the exact opposite.

By writing more than three thousand words on this topic, while not only ignoring the complexities of the conflict, but also by neglecting to mention the death, suffering and trauma faced by Israeli children, as well, Star readers are left with a tremendously misleading image of what is truly happening.

The nature of the conflict also is critical in helping readers to understand the true culprits of this suffering, and who Gaza’s children have to blame for their tragic circumstances.

When Hamas, the leaders of Gaza, use and abuse their own absolute authority to steal from their own people, brainwash the next generation to hate Israel and Jews, and purposefully start a war with Israel, that deserves a mention, at the very least.

War is a terrible reality faced by too many children – in Gaza and Israel alike – but by publishing an article with so many critical omissions, in addition to extremely misleading terminology about the conflict, the Toronto Star serves only to deepen misunderstandings and create a superficial picture of the conflict. Peace between Gaza and Israel can only come when Hamas lays down its weapons and accepts Israel’s right to exist. Until then, Hamas is willingly sacrificing its own children on the altar of extremism.

Send your considered comments to the Star at: lettertoed@thestar.ca.