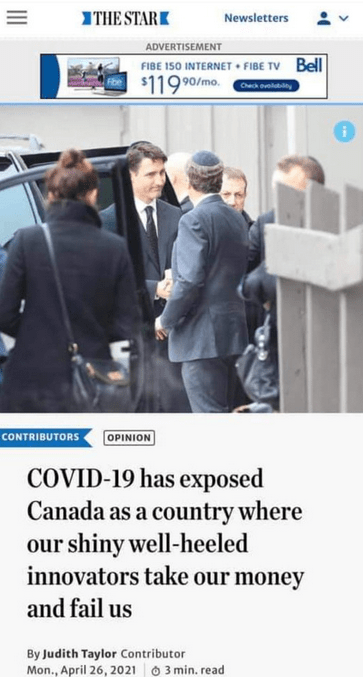 Today, after the Toronto Star published a photo to an opinion piece on its website which many felt suggested that wealthy Jewish leaders “take our money and fail us,” the Star removed the offending photo and issued an apology notice.

An editor’s note appended to the column states the following:

The photo accompanying this column has been changed. The Star apologizes for the choice of the previous photo, which was offensive.”

The photo depicted the 2017 funeral of pharmaceutical titans Barry and Honey Sherman in Toronto, which Prime Minister Trudeau attended and shook hands with Toronto Mayor John Tory, both who were pictured wearing yarmulkas (keppahs) and both who, it’s important to note, are not Jewish.

The column centred on a blame game for how Canada is in the state it’s in as it relates to the COVID-19 pandemic. Author Judith Taylor stated the following which likely spurred the Star to choose this photo:

My first day dream takes me, strangely, to one of the largest funerals in Canadian history, that of the pharmaceutical titans, the Shermans, who were killed in 2017. Barry Sherman, estimated to be the 12th most affluent Canadian, had an estimated net worth of nearly $4 billion at the time of death from his company Apotex, which produces and distributes generic drugs.

This funeral interested me because our prime minister, Justin Trudeau, was in attendance. Most of us understand close relationships among elites — heads of states and heads of corporations, for example. Depending on our social location we may think this is beneficial, or corrupt.

But in this moment we must ask why such close relations did not for example, lead to the production of vaccine manufacturing at home.”

It’s commendable that the Toronto Star removed the offensive photograph from its website and issued an apology. Trouble is that if you Google the headline of this commentary, this image still appears.

Though we trust there wasn’t any malice on the part of the Star, many felt that the photo bought into the antisemitic trope alleging Jewish control over government officials. There’s no place in Canadian media for an insinuation like this.