On February 2, the Toronto Star published a prominent article in print and online by Immigration Reporter Nicholas Keung entitled: “Jewish Canadians urge Israel to back off plan to deport African refugees”. 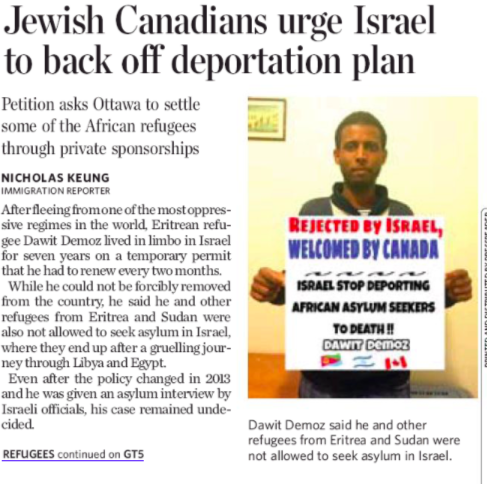 HonestReporting Canada filed a complaint with the Star on the day this report was published expressing our concerns about how the Star’s report omitted important context as it did not mention the Israeli government’s official position on this issue, a position which is well known and which has been reported widely.

As we told the Star, the Times of Israel noted the following on February 2: “Israeli officials contend they are economic migrants looking for work opportunities, not asylum seekers. ‘We are not taking action against refugees,’ Netanyahu said at the beginning of the weekly cabinet meeting on January 21. ‘We are taking action against illegal immigrants who come here for work purposes. Israel will continue to be a shelter for true refugees and will eject illegal infiltrators.’”

This should have been mentioned by the Star. This very important context was sorely lacking rendering the Star’s report unfair and not balanced. Furthermore, the terms refugees and migrants are not interchangeable and are defined accordingly:

Subsequent to receiving our complaint, the Star amended the online version of this article which now reports the following:

However, Netanyahu has argued that the Africans are not refugees but economic migrants looking for work opportunities.

Furthermore, we take note that the Star deleted the following claim that their reporter made in this article: “The Israeli Embassy in Ottawa did not respond to the Star’s repeated requests for comment.” 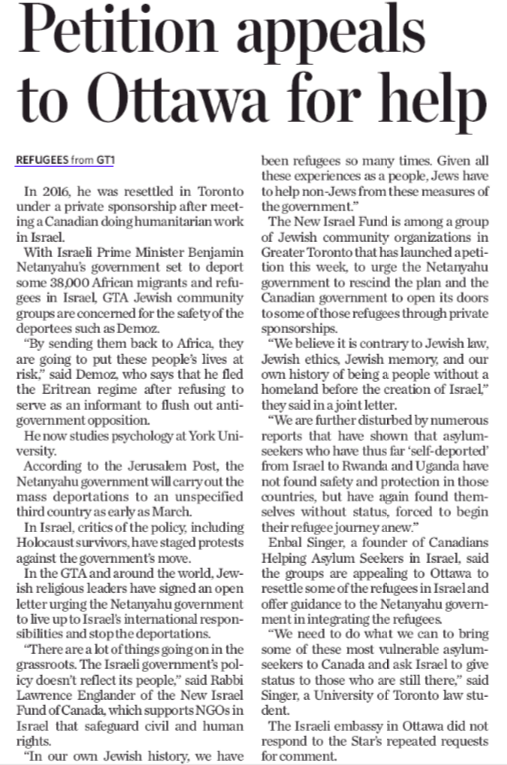 While HonestReporting Canada appreciates that the Star’s article has been amended online, in accordance with the the Star’s journalistic code of conduct, the Toronto Star is duty bound to publish (both in print and online) an Editor’s Note to explain the corrective action that was undertaken. In so doing, the Star would live up to its claimed commitment for transparency in the complaint process and congruent with its Star Trust Initiative. We have asked for such action to be undertaken. Stay tuned to this page for future updates.