Why Are Anti-Israel Activists So Afraid of The...
McGill Tribune Publishes Op-Ed Calling for a Boycott...
Ontario Arabic Paper’s Editor Downplays Holocaust; Meshwar Describes...
How the War in Ukraine is Having a...
Toronto Star Columnist Shree Paradkar Wrongly Claims IHRA...
After Vancouver Adopts IHRA, CBC Radio Interviews Fringe...
Qatar Prepares For The 2022 World Cup: Will...
Lawfare: Who is Using the Law More Effectively?...
Official Publication of the College of Physicians and...
French Rapper Accused of Antisemitism; HRC Comments on...
Home Daily Brief Toronto Star Accuses Canadian News Media of Contributing to Islamophobia 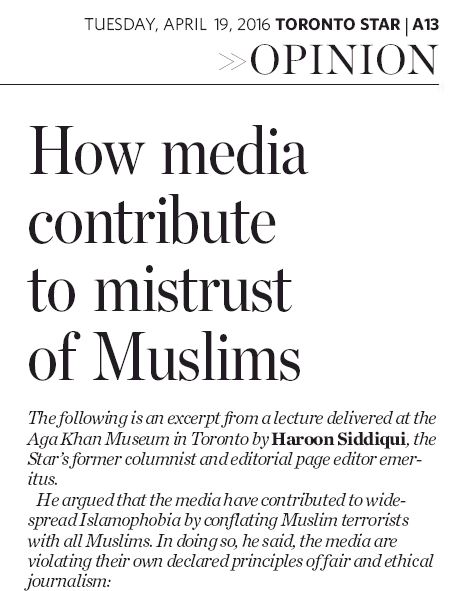 The Toronto Star today published an excerpt from a lecture delivered at the Aga Khan Museum by Haroon Siddiqui, the Star’s former columnist and editorial page editor emeritus, who argued that the media have contributed to widespread Islamophobia “by conflating Muslim terrorists with all Muslims.” John Honderich, chair of the board of Torstar Corp also thinks there has been an anti-Muslim bias in the media, while John Cruickshank, publisher of the Star, said that a big segment of the Canadian media has been peddling “flat-out racism and bigotry” against Canadian Muslims.

The entire excerpt can be found appended below:

The biggest culprits have been the National Post and the Postmedia group of newspapers across the country, which now include the Sun chain.

Hardly a week goes by without these publications finding something or other wrong with Muslims and Islam. These publications are forever looking for terrorists under every Canadian minaret. They are hunting for any imam or any Muslim who might make some outrageous statement that can be splashed as proof of rampant Muslim militancy or malevolence.

In the 1950s there was the Red Scare. Today, Postmedia are giving you the Green Scare.

Last week, I spoke to John Honderich, chair of the board of Torstar Corp. I asked him if he thinks there has been an anti-Muslim bias in the media. “Yes, there is,” especially in the Postmedia newspapers, he said. Some of their columnists conflate Muslim terrorists and Muslims – “this has been lethal.”

John Cruickshank, publisher of the Toronto Star, told me that a big segment of the Canadian media has been peddling “flat-out racism and bigotry” against Canadian Muslims. He added:

“The popular press, perhaps, are doing what they’re doing not out of some deep conviction or ideological basis, but because they are playing to the notion of building the loyalty of a certain segment of their customer base by creating a tribal solidarity against Muslims. They’re doing it to strengthen their own brand. It is despicable. We have to call them out on it for not abiding by the rules of their craft.”

The other media are not blameless.

The media demand that Canadian Muslims condemn the latest act of terrorism, anywhere. Muslim groups and individuals always do so, but the media rarely report on them. So the impression persists among large numbers of Canadians that Muslims have not condemned terrorism and may, in fact, be endorsing it by their silence. The media leave Muslims in a no-win situation.

Some of the more outrageous allegations against Muslims have been carried on editorial and opinion pages, especially in Postmedia papers. Pundits are, of course, entitled to their views in a free society. But even opinion pieces must adhere to basic facts. Is it really true that Canadian imams are inciting terrorism? Are our mosques really crawling with potential terrorists? Is a preference for halal products really a sign of fundamentalism or militancy – more than it may be for your preference for kosher food?

The credibility of media with Muslims is very low. Muslims generally don’t trust us. In fact, they’re outright afraid of us. They don’t think they would get a fair shake from us. They are petrified that their words would be twisted and distorted.

Let me offer some suggestions.

I describe myself as an “incurably optimistic Canadian.” So I think if any nation can debate this issue, within the framework of free speech and fair play, it is Canada. If we get this right, we might even export it to the United States and Europe.

We owe it to Canada to at least try.