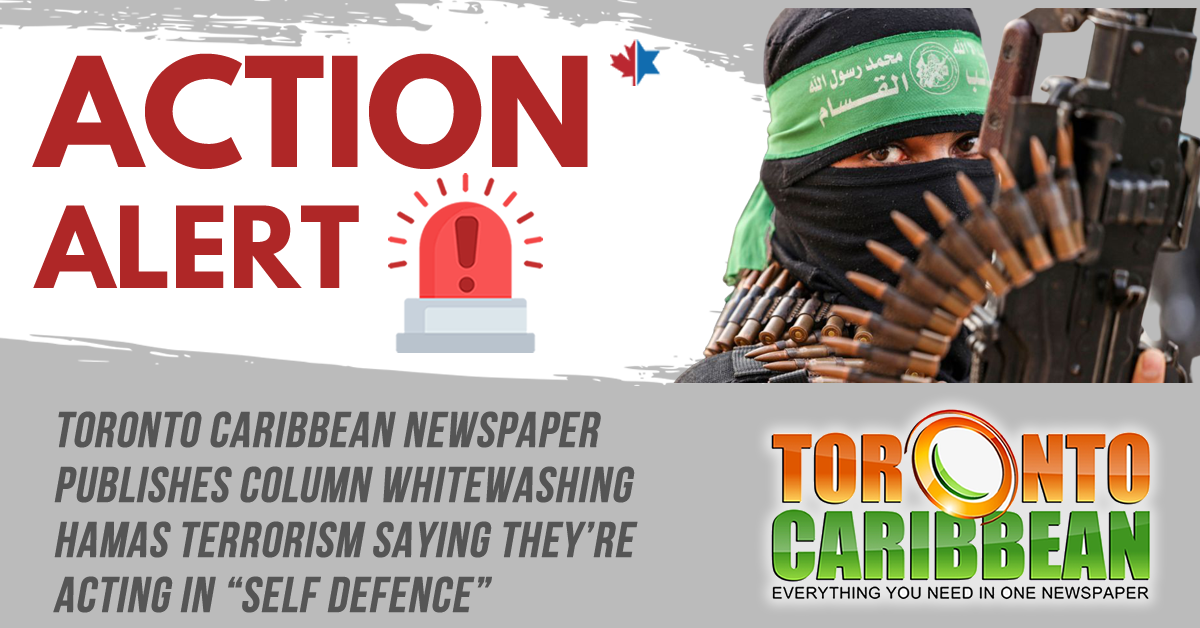 A couple weeks ago, HonestReporting Canada exposed a vile antisemitic conspiracy theory which was published by the Toronto Caribbean (TC) newspaper, where columnist Steven Kaszab made the claim that “Canadian, American and British politicians continue to kowtow to their populations Jewish Lobbyists.”

HonestReporting Canada and its subscribers sent scores of complaints to the publication and its editors, but Toronto Caribbean has yet to respond to complaints, nor take any corrective action.

A deeper look into Toronto Caribbean finds that its proclivity to publish anti-Israel misinformation is not new. In a column published on June 9, 2021 on TorontoCaribbean.com, Omniya Ali used the Israeli-Palestinian conflict to peddle some of the most egregious and baseless, but nevertheless widely attempted slurs against Israel.

In the last Hamas against Israel war, the terror group used a property dispute in Jerusalem to justify rocket barrages against the Jewish State. In the neighbourhood of Shimon HaTzaddik, sometimes referred to as Sheikh Jarrah, a group of Arab tenants refused to pay rent to their Jewish landlords, claiming to be the true owners. Despite copious legal evidence proving the Jewish ownership, Ali made the scurrilous claim that Israel is attempting “forced displacement” against the deadbeat Palestinian tenants.

Ali’s unfounded allegations against Israel go back much further.

She refers to the alleged “forced expulsion of hundreds of thousands of Palestinians” from the newly independent State of Israel, and accused the “Zionist forces” of ethnic cleansing. Despite the popularity of this claim, it remains just as groundless as ever.

Israel did not simply appear out of thin air, and decide to implement a “process of violence” against Arabs, as Ali alleges. In reality, Jews have lived in Israel, their ancestral homeland, for three thousand years. Despite countless attempts by empires from the Babylonians, Romans, Greeks, to the Saracen Arabs to take over the land, today millions of Jews walk in the footsteps of their ancestors, in one of the most powerful victories of native peoples against colonization.

In the last century, both Jews and Arabs lived in the land, and in 1947, the United Nations passed Resolution 181, which called for the establishment of both a Jewish and an Arab state. The Jewish delegation supported the measure, while the Arab states rejected it. 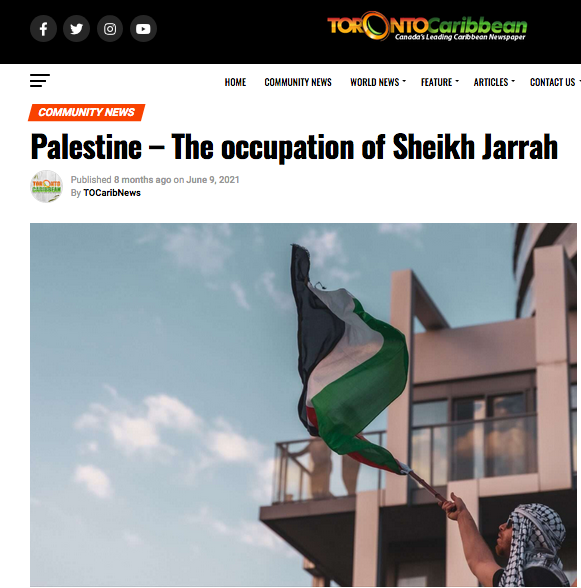 After Israel announced its independence from the United Kingdom in 1948, it was attacked by surrounding Arab states, who attempted to destroy the young country, but were defeated. And while many Arabs inside Israel left, they did so at the behest of local Arab leaders who, expecting Israel to be swiftly destroyed, threatened them, expecting their return would be imminent. As the Economist magazine reported at the time, “It was clearly intimated that those Arabs who remained in Haifa and accepted Jewish protection would be regarded as renegades.”

Nearly 75 year later, little has changed. More than two million Arabs live in Israel, and they enjoy full civil and democratic rights, with an Arab party even being a part of the coalition government. Israel has extended its hand in peace to the Palestinians countless times, even in 2000 going so far as to offer to carve up Jerusalem, the historical Jewish capital city, but this offer, too, was rejected by then-Palestinian leader Yasser Arafat, who chose a violent uprising instead.

In 2005, Israel voluntarily withdrew from the Gaza Strip, uprooting 8,000 of its own citizens from land some of them had lived on for generations, in an attempt at peace. Tragically, shortly thereafter the enclave was taken over by Hamas, a genocidal Islamist terrorist group which has a long history of suicide bombings against Israelis, and which launched a rocket war against the Jewish State last year.

Rightly labelled a terrorist group in Canada, the United States and the European Union, Hamas has sent suicide bombers into discotheques, blowing up and murdering dozens of teenagers, and into a Passover seder, massacring seniors while celebrating a holiday.

It is this terrorist group which Ali argues should be seen as “resistance” and engaging in “self-defence.”

Hamas is a misogynistic, homophobic group which deserves only condemnation, and not the kind of legitimacy proposed by Ali.

Ali’s anti-Israel screed has no place in any Canadian publication. It is a cacophony of misinformation, half-truths, and whitewashing of an Islamist terrorist group. Toronto Caribbean newspaper must repudiate Ali’s words, and ensure that such propaganda, like the antisemitic conspiracy theory it recent published alleging that Jewish lobbyists control world governments, no longer defiles its pages.