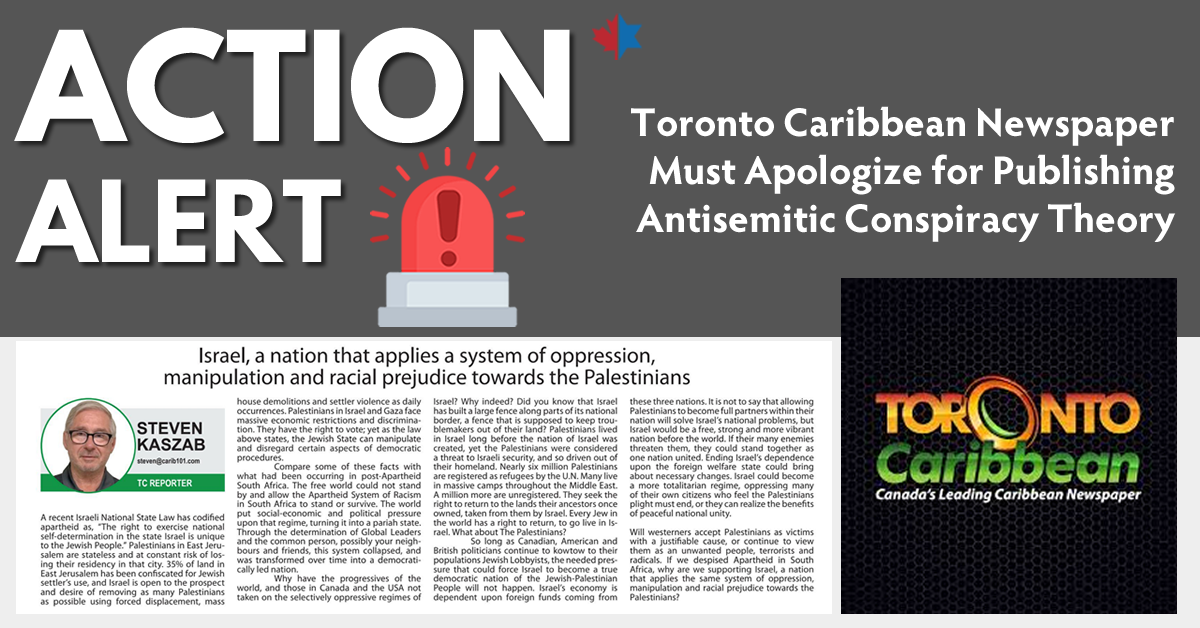 On the heels of the antisemitic terror attack at Colleyville’s Beth Israel Synagogue last week, the Toronto Caribbean (TC), a paper which regards itself as “Canada’s leading Caribbean newspaper,” has published a column which outrageously utters an antisemitic conspiracy theory claiming that “Canadian, American and British politicians continue to kowtow to their populations Jewish Lobbyists…”

A January 19 column by reporter Steven Kaszab makes this odious claim in a commentary that also draws the offensive and inaccurate comparison of Israel to apartheid South Africa and that supports the one-state solution to the Israeli-Palestinian conflict, also known as a ploy to destroy Israel demographically by allowing the so-called Palestinian “right of return” which would make Israel no longer a Jewish state due to the influx of millions of Palestinian-Arabs. 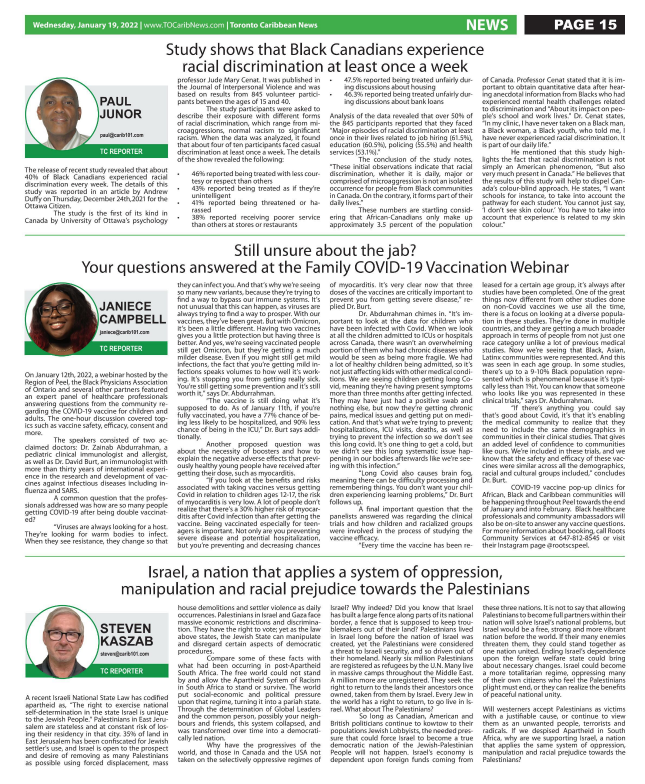 This situation is further compounded by the fact that we know that the terrorist who attacked Beth Israel synagogue last week did so as he believed that Jews have the power to control world governments and to that end, he thought that the Jewish worshipers could call President Biden who would do their bidding by releasing Aafia Siddiqui, an Al-Qaeda operative who was convicted for attempting to murder American soldiers and officials in Afghanistan.

Aside from its print distribution which it claims reaches major Ontario cities including, but not limited to North York, Vaughan, Scarborough, Brampton, Ajax and more, Toronto Caribbean News has over 77,581 combined followers across Facebook, Twitter, Instagram and YouTube.

As we know from recent experience, antisemitic conspiracies are dangerous as they incite radicals to inflict violence against Jews. At a time when Canadian Jews are the number one victims of hate crimes, the Toronto Caribbean’s publishing this antisemitic column only fans the flames of hatred and has the potential to incite radicalism.

Call on Toronto Caribbean newspaper Editor/Publisher/CEO Grant Browning to issue an immediate apology to Canada’s Jewish community for publishing this antisemitic conspiracy theory. Demand that he remove this column from his website and no longer feature content from Steven Kaszab anymore. Call on Toronto Caribbean to also explain in detail how it will institute editorial reform to ensure that hateful commentary is never published again. Send emails to: grant@carib101.com. Please also send tweets to @gbrowning101 and Toronto Caribbean at @tocaribnews.

Please also encourage members of Canada’s Caribbean community to stand in solidarity and to show allyship with Canada’s Jewish community by condemning the Toronto Caribbean’s publishing of this antisemitic column.