Why Are Anti-Israel Activists So Afraid of The...
McGill Tribune Publishes Op-Ed Calling for a Boycott...
Ontario Arabic Paper’s Editor Downplays Holocaust; Meshwar Describes...
How the War in Ukraine is Having a...
Toronto Star Columnist Shree Paradkar Wrongly Claims IHRA...
After Vancouver Adopts IHRA, CBC Radio Interviews Fringe...
Qatar Prepares For The 2022 World Cup: Will...
Lawfare: Who is Using the Law More Effectively?...
Official Publication of the College of Physicians and...
French Rapper Accused of Antisemitism; HRC Comments on...
Home Media Action Alerts2022 Toronto-Area Arabic Media Peddles What HRC Regards As Antisemitic Propaganda 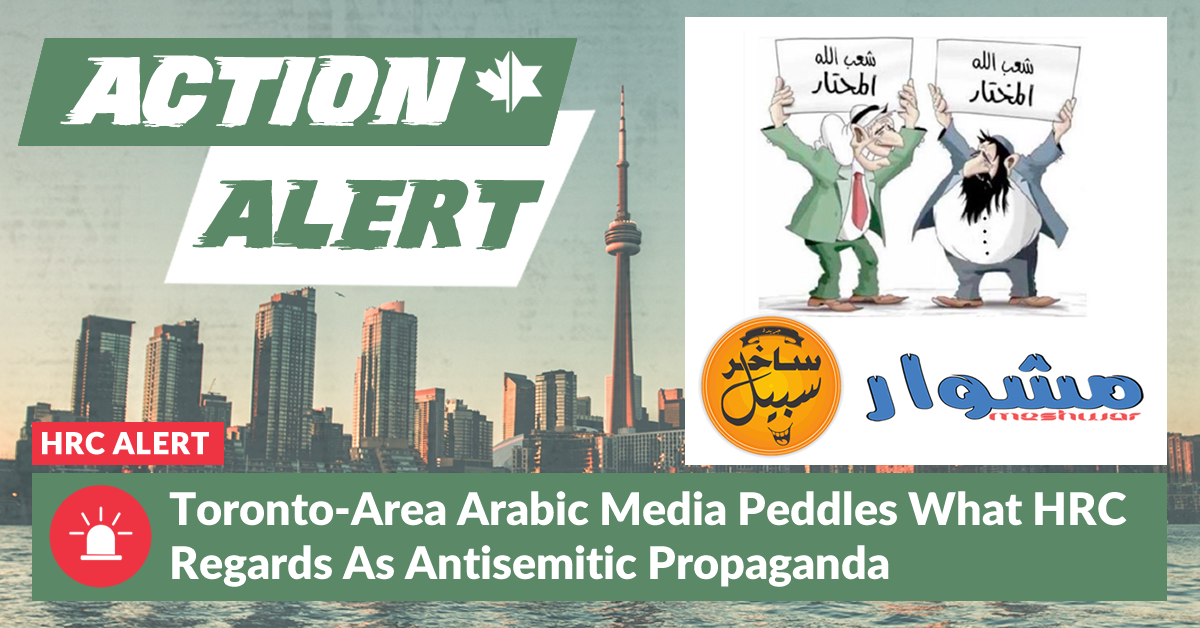 In the mainstream Canadian news media, problematic news coverage related to Israel isn’t a rare occurrence. And while sometimes there are overt anti-Israel opinion columns or broadcasts, oftentimes, the problems are a result of omission, misinformation or poor writing.

But in recent weeks, separate incidents in the Toronto-area Arabic language press have shown a very disturbing perspective, far beyond simple misinformation and that veered into what we consider to be hateful discourse.

The May 31, 2022 edition of Sakher Sabeel, a Misssissauga-based Arabic magazine featured an interview with Palestinian poet Ghalia Abu Sitta during her visit to Canada. Abu Sitta, who is also a veteran member of the Fatah movement, was asked by the editors of the magazine for her perspective on the “ongoing tragedies” in the Palestinian territories, and her response was a mishmash of what we consider to be historical revisionism and a tacit denial of Israel’s right to exist.

HonestReporting Canada has independently verified the translation of Abu Sitta’s words from the original Arabic and they are as follows:

The Palestinian people are now affected by the negative phenomena that have surfaced from the daily storming of the occupation of the [Palestinian] cities, the Judaization of Al-Quds (Jerusalem), and the swallowing up of lands in all the cities of Palestine,” Abu Sittah said in the interview. “They (Palestinians) are also frustrated with the regimes…collaborating and normalizing relations [with Israel]…they…will not give up until the return [of the Palestinian refugees], God willing.”

In 1948, when the newly reborn State of Israel declared its independence, the country was immediately invaded by surrounding Arab states. And while Israel managed to survive the deadly onslaught, one of the consequences of the war was the displacement of roughly 750,000 Palestinian-Arabs out of Israel into surrounding countries, prompted in part by the encouragement of Arab leaders, who expected a swift Arab victory over the young Jewish state.

When the victory over Israel did not happen, these Arab refugees – whose descendants today number in the millions – became a political weapon wielded by anti-Israel activists, knowing that these millions of Palestinian-Arabs returning to Israel would spell the end of the country as a Jewish state.

Underneath the interview, the magazine published one of Abu Sitteh’s anti-Israel poems, with excerpts which include “Al-Aqsa is suffering from the evil of the Zionists…the mad Zionist criminal is spreading injustice and roaming between our borders to impose his control on our land…” Importantly, the IHRA Definition of Antisemitism considers as a contemporary example of antisemitism when one makes “… mendacious, dehumanizing, demonizing, or stereotypical allegations about Jews…”

Not to be outdone, just over a month later, on July 8, 2022, Meshwar Media, a Mississauga-based Arabic-language publication which has long been accused of peddling anti-Israel and antisemitic content, including featuring content denying the Holocaust and mourning the death of a Palestinian terrorist, published a “satirical short story” called “How did God Create the Chosen People,” replete with what we regard are classical antisemitic tropes and imagery contained in a cartoon.

In the short story, Nazareth-based author Nabeel Oudeh told a tale about an angel meeting with the Children of Israel, who were offered the commandments from God. Upon initial hesitation, the Jews asked “how much do these commandments cost,” and upon being told that they were free, the Jews rejoiced and said “A gift for free?! Free?! Well, that’s great. Bring it and bring us ten more like it!” 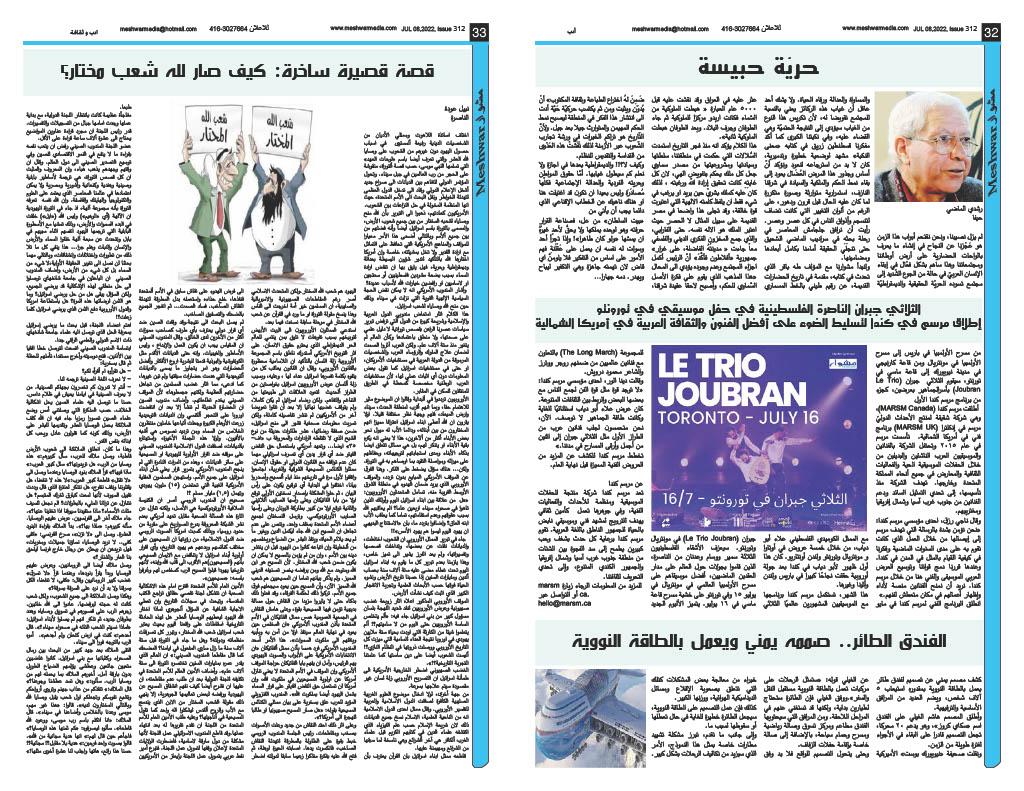 HonestReporting Canada has independently verified the translation of Oudeh’s words from the original Arabic.

The trope of a greedy and cheap Jew is as old and common, but also malicious, having been most widely used by pre-Holocaust anti-Jewish propaganda. And while it may seem as harmless, we regard Oudeh’s short story and the corresponding caricature as merely the latest in a long string of anti-Jewish content published by Meshwar Media. 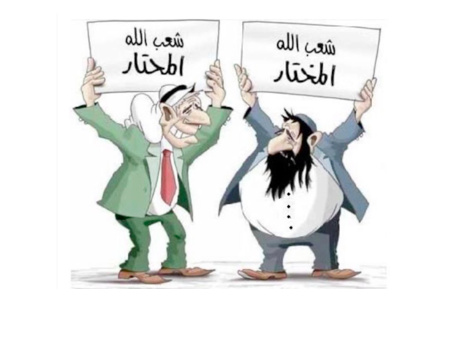 Meshwar Media has been accused of publishing content in the past denying the Holocaust, with references to “the Holohoax” as being “virtually the biggest lie in history.” It has also republished a odious opinion article from Al Jazeera which claimed that violence is an inherent characteristic in Judaism. And it has also been accused of attempting to use the Hebrew Bible to spread antisemitic messaging, by republishing an Al Jazeera column which claimed that “if you look at the Bible, the Jews are the real terrorists in the name of the Lord.”

While errors sometimes happen even by the best journalists, this is not the case with these incidents from Sakher Sabeel and Meshwar Media. In our view, these two recent cases – of Ghalia Abu Sitta’s interview and poem, and Nabeel Oudeh’s short story and the corresponding cartoon, demonstrate deeply problematic antisemitic incidents requiring both condemnation and rectification.

When asked for comment, Nazih Khatatba, the General Director for Meshwar Media, failed to condemn Oudeh’s short story and instead accused HonestReporting Canada of following “what your officials in the Israeli occupation government” dictates, and claimed that Arabs “are victims of these holocausts.” This statement alone qualifies as antisemitism according to IHRA as Khatatba compared contemporary Israeli policy to the Nazis.

Mohammed Haroon, the Editor-in-Chief of Sakher Sabeel, did not respond to our request for comment.

Meshwar Media and Sakher Sabeel deserve to be named and shamed for their toxic and hateful anti-Israel efforts. Share our alert now to spread the word.