HRC has previously drawn attention to Meshwar, most recently for its denial of the Holocaust. The editor of this free newspaper serving the Toronto area is also a board member of Palestine House whose funding was halted by the Canadian government due to concerns about “a pattern of extremism”.

The pattern continues. In its May 2nd edition, researcher Jonathan Halevi reports Meshwar has published an article calling the Holocaust “the biggest lie in history”:

“What is the meaning of the ‘Jewish Holocaust’ and why is it relevant for us? We publish this article at the time the Zionist entity is celebrating the anniversary of the Holohoax, meaning the lie, virtually the biggest lie in history.

The article was accompanied by an anti-semitic cartoon depicting an orthodox Jew with hook nose driving a car. The Jewish symbol the “Star of David” is drawn on his hat. The Jewish driver is holding a steering wheel designed as the emblem of the United Nations and a transmission stick bearing the face of US President Barack Obama on its head. 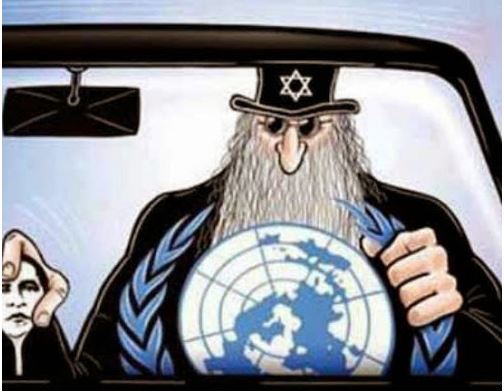 In another interview to Al-Jazeera TV on May 13, 2008,  the author of the article (Ibrahim Alloush)  suggested sending suicide-bombers armed with “small nuclear bombs” to Israel.

Holocaust denial and incitement against Israel are rampant in the Arab world, and have proved to be an obstacle in preparing Palestinian society for peace. Palestine House board member and editor at Meshwar appears to be unaware that we are in Canada. Educating Arab Canadians to deny the Holocaust and applaud incitement against Israel is incompatible with Canadian values.