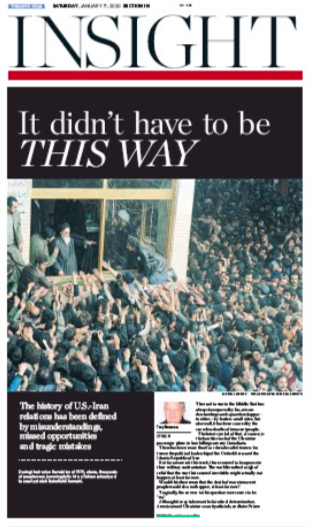 Tony Burman is deserving of contempt for reviving his outrageous conspiracy theory in his January 11 Toronto Star column claiming that Israel controlled Canada’s Mideast policy. (In 2012, Burman first made this claim which was widely rebuked at the time.)

Burman wrote the following in his recent polemic about the conflagration between the United States and Iran:

In 2012, then-prime minister Stephen Harper effectively outsourced Canada’s Mideast policy to Israel and did its bidding by cutting off relations with Iran.”

You’d expect to see a hateful claim like this in Der Stürmer and the Protocols of the Elders of Zion.

In fact, then-foreign affairs minister John Baird proclaimed that Canada’s decision to cut diplomatic ties with Iran, brand it a state-sponsor of terror, and to close its embassy in Tehran was a “made-in-Ottawa decision” saying that Canada acted alone. Baird listed many reasons to explain what prompted Canada’s move against Iran: The safety of Canadian diplomats, its military assistance to Syria, hateful antisemitic rhetoric, support for terror, deplorable human rights record, and its destructive pursuit of nuclear weapons.

There’s an important line separating legitimate opinion that enhances the public discourse, from hateful rhetoric that interferes with constructive dialogue. While Burman has the right to offend, he crossed the line by saying that Canada’s Mideast policy is outsourced to Israel.

Please send a letter to voice your concerns about the Toronto Star’s giving Tony Burman a platform to state his odious conspiracy theory that Israel controlled Canada’s Mideast policy. Send letters to: lettertoed@thestar.ca.