UPDATED: December 16, 2017: Following the release of this alert, the Toronto Star prominently published the following five letters which explained that there is “No apartheid in Israel”. The original alert can be found appended below. The published letters are as follows:

“This column by Tony Burman is full of extreme and unsustainable accusations. There is no “apartheid” in Israel. Arab citizens comprise more than 20 per cent of the country and Arabs have the right to study, worship and protest peacefully, as do all other citizens. Arabs and Israelis work and study alongside each other at Israel’s fine hospitals and universities. Israel currently has two Arab Supreme Court justices, who sometimes rule against Israeli Jews. Arab East Jerusalem residents could be citizens but choose not to because many prefer to continue seeing Israel as the enemy. If Arabs are allowed to live in any part of Israel, why would it be “illegal” for Israel to build homes for Jews in the eastern part of Jerusalem? Should it be free of Jews? Most of the Jewish holy sites are in East Jerusalem. Should Jews should not be allowed to go there? Should Israel, or any other country, choose its actions based on the veto riot, meaning that it can’t do the right thing simply out of fear of violent reactions? Is this a fair or logical way to determine any foreign policy?” Sara Miller, Queens, N.Y. 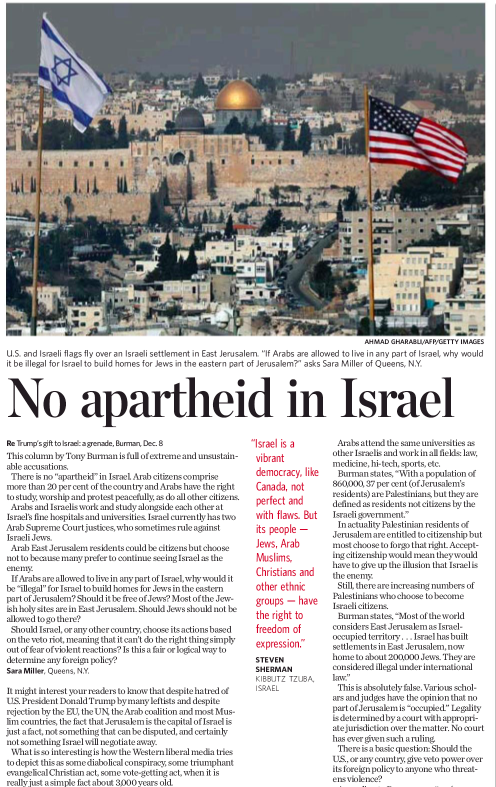 “It might interest your readers to know that despite hatred of U.S. President Donald Trump by many leftists and despite rejection by the EU, the UN, the Arab coalition and most Muslim countries, the fact that Jerusalem is the capital of Israel is just a fact, not something that can be disputed, and certainly not something Israel will negotiate away. What is so interesting is how the Western liberal media tries to depict this as some diabolical conspiracy, some triumphant evangelical Christian act, some vote-getting act, when it is really just a simple fact about 3,000 years old. This fact was confirmed in 1949 by the newly minted state of Israel, affirming the fact that Jews created Jerusalem, that it was never the capital of any other country and was never very important to any other faith. I hope Canadian politicians come to realize the fact that Jerusalem is the capital of Israel and really ought to be acknowledged by our Parliament.” Andria Spindel, Toronto

“Tony Burman compares Israel to Apartheid South Africa, although it has none of the laws that defined Apartheid. All Israel’s citizens are equal by law. Burman also claims Jewish neighbourhoods in Jerusalem are illegal by international law, although no such law exists nor did any court of law make such a determination. And claiming Arab residents of East Jerusalem cannot get citizenship is false. In fact, more and more are applying for citizenship.” S. Thomson, Arlington, Mass.

“Columnist Tony Burman is wrong. Israel is a vibrant democracy, like Canada, not perfect and with flaws. But its people – Jews, Arab Muslims, Christians and other ethnic groups – have the right to freedom of expression. As expressed in Israel’s Declaration of Independence: “The State of Israel will … ensure complete equality of social and political rights to all its inhabitants, irrespective of religion, race or gender …” Arabs attend the same universities as other Israelis and work in all fields: law, medicine, hi-tech, sports, etc. Burman states, “With a population of 860,000, 37 per cent (of Jerusalem’s residents) are Palestinians, but they are defined as residents not citizens by the Israeli government.” In actuality Palestinian residents of Jerusalem are entitled to citizenship but most choose to forgo that right. Accepting citizenship would mean they would have to give up the illusion that Israel is the enemy. Still, there are increasing numbers of Palestinians who choose to become Israeli citizens. Burman states, “Most of the world considers East Jerusalem as Israel-occupied territory … Israel has built settlements in East Jerusalem, now home to about 200,000 Jews. They are considered illegal under international law.”  This is absolutely false. Various scholars and judges have the opinion that no part of Jerusalem is “occupied.” Legality is determined by a court with appropriate jurisdiction over the matter. No court has ever given such a ruling. There is a basic question: Should the U.S., or any country, give veto power over its foreign policy to anyone who threatens violence? According to Burnan, yes: “… (recognizing Jerusalem) foreshadows a dangerous new phase in the conflict that will encourage extremists on both sides to reach for the gun and engulf the region in violence.” Even with the risk of violence, the U.S. has never allowed those who threatened it to determine its policy”. Steven Sherman, Kibbutz Tzuba, Israel

“U.S. President Donald Trump’s announcement only recognized Israel’s capital being in western Jerusalem. Nothing changed on the ground. No options were removed from serious negotiations, should the Palestinians ever engage in them. The actual embassy move may take years. Israel is not an “apartheid state.” Precisely because Israel considers itself sovereign in all of Jerusalem, Arab residents have the option of taking Israeli citizenship. Many have done so, particularly when the possibility looms of any division of the city.” Richard D. Wilkins, Syracuse, N.Y.

In his opinion column entitled, “In favouring Israel, Trump puts it at risk” Toronto Star foreign affairs columnist Tony Burman expresses some extreme and unsupportable opinions while also misstating critical facts. While columnists are entitled to their opinions, re-writing reality is a simply a betrayal.

The world didn’t allow an apartheid South Africa to survive in the final decades of the 20th century…nor will an apartheid Israel be allowed to endure in the 21st century.

Israel is not an apartheid state. Period.

Like any diverse, democratic nation (including Canada) Israel sometimes contends with issues of racial tension (in both directions). Yet (also like Canada) Israel demonstrates a great deal of peaceful and engaged co-existence as well.

However, with respect to the very definition of “apartheid”  there is only one thing that matters: under Israeli law all citizens are equal.

This fundamental principle is reflected in Israel’s Declaration of Independence which states:

The State of Israel will . . . ensure complete equality of social and political rights to all its inhabitants irrespective of religion, race or gender. . .

And it shows: In reality, Arabs attend the same universities as every other ethnicity in Israel, and work in every conceivable field, including law, medicine, hi-tech companies, even sports and fashion modeling. Israel currently has two Arab Supreme Court Justices (actually an increase from time we made this video) and 17 Arab Members of Knesset, in addition to a numerous local officials.

With a population of 860,000, 37 per cent [of Jerusalem’s residents] are Palestinians, but they are defined as “residents” not “citizens” by the Israeli government.

What Burman hides from the reader is that Palestinian residents of Jerusalem are indeed entitled to citizenship, yet in the past most Palestinians chose to forgo that right, because becoming a citizen would implicitly mean giving up the illusion of Israel as the “enemy.” Yet even that practice is already changing, with increasing numbers of Palestinians choosing to become citizens and fully enter Israeli society.

Most of the world considers East Jerusalem as Israeli-occupied territory….Israel has built a dozen settlements in East Jerusalem, now home to about 200,000 Jews. They are considered illegal under international law.

International academics hotly debate this topic, and there are indeed highly regarded scholars and judges who take the position that no part of Jerusalem is “occupied” under international law, and that settlements are not illegal. This essay gives a good overview.

Yet ultimately, such a judgment is made not by scholars nor by nations, nor “even” by journalists.  Legality is determined by a court with appropriate jurisdiction over the matter. As no court has ever issued such a ruling, Burman’s claim that settlements are “illegal under international law” is quite simply incorrect.

As an aside, Burman neglects the context that east Jerusalem includes the Old City with its ancient Jewish Quarter, as well as the famous Western Wall and the holiest site in Judaism: the Temple Mount.

Though east Jerusalem has many Palestinian residents, it is hardly the exclusively Palestinian enclave that Burman would have his readers believe.

Is Israel an Apartheid State?

Should the United States, or any country for that matter, give veto power over its foreign policy to anyone in the world who threatens violence?

Burman seems to think so:

…[recognizing Jerusalem] foreshadows a dangerous new phase in the conflict that will encourage extremists on both sides to reach for the gun and engulf the region in violence.

So far, the violence, thankfully, has not been “engulfing” as Burman dramatically predicts. Yet even if a risk of violence exists,  the United States, has never allowed those who threaten violence to dictate its foreign policy. (I discussed this topic in greater detail.)

Why does The Star tolerate this?

The Star’s Code of Ethics states:

Good faith with the reader is the foundation of ethical and excellent journalism. That good faith rests primarily on the reader’s confidence that what we print is true. Every effort must be made to ensure that everything published in the Star is accurate, presented in context, and that all sides are presented fairly.

Burman is entitled to his opinions. But if his views are so divorced from reality that he must change facts, then he has blatantly violated the Star’s ethical code, as well as the trust of The Star’s readers.

All of which raises the question: Why does The Star tolerate reality-bending articles like this?

Share your considered comments with The Toronto Star at lettertoed@thestar.ca.