The Strained Quality of CBC.ca Moderation 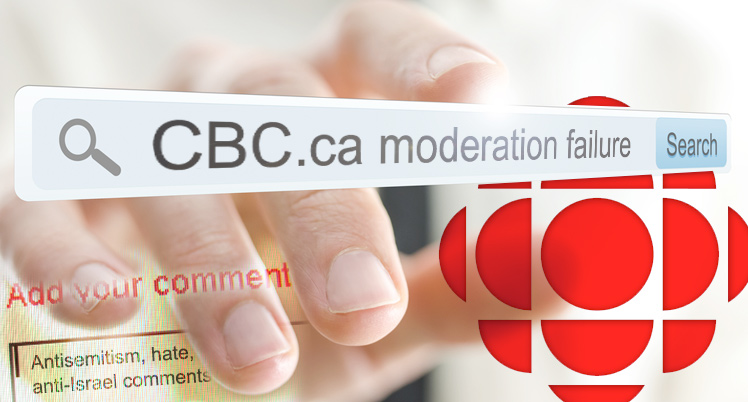 Our national broadcaster, the CBC, maintains an active talkback facility on the internet that allows registered readers to submit comments and voice their opinions.

One of the things that the submission guidelines specifically prohibit is ‘hate speech’ (paragraph 9c). But what happens when you see comments that shouldn’t have passed “moderation”? For those cases, the CBC provides you with a “Flag” link that lets you protest a comment. You can also submit your own comment explaining why somebody else’s comment is racist or inappropriate.

In some cases, comments make it through, because they don’t appear to be offensive – they subtly allude to an international Jewish conspiracy to take over the world. Or they don’t say “Jews”, they say “chosen people”. In other cases, comments specifically mention notorious antisemitic sources (such as the famous early 20th century antisemitic Russian libel, the Protocols of the Elders of Zion), and other comments support the outrageous statement. Others still find interesting ways to compare modern Israel to Nazi Germany, or find interesting ways to paint the Jews as racist, soulless ghouls.

Even seemingly innocuous CBC reports seem to draw these commenters. For example, recently the CBC published a story about an incident in the US where a Saudi Princess was charged with human-trafficking and where the charges were dropped. You’d think a story like that would have little relevance to Jews and Israel, but that wasn’t the case.

A commenter felt compelled to post that the Saudi princess’ defense attorney was likely Jewish, and how Jews are found where justice is perverted, controlling both sides of the case and extorting cash. 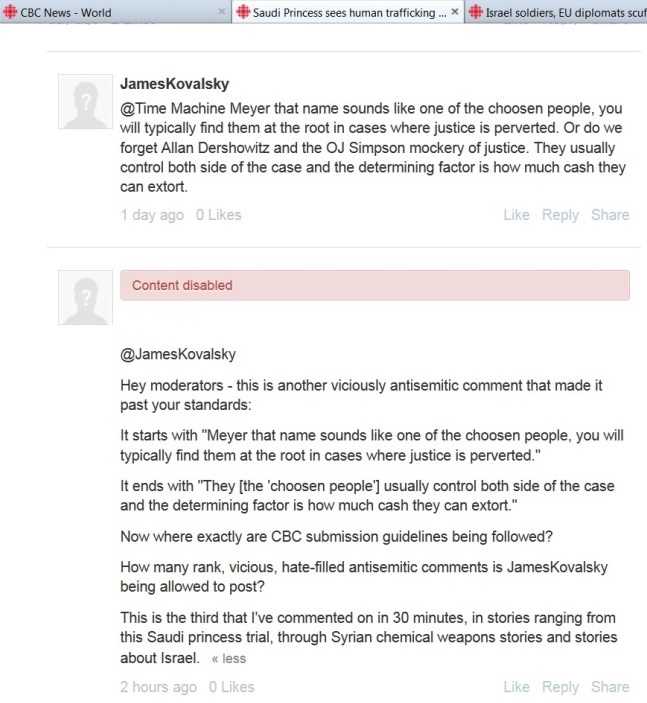 That comment passed moderation and stayed online for over a day before being removed. Interestingly, not only did it pass moderation, but it also survived being ‘flagged’ many times (by me), as well as having responses submitted to the moderator (by me) explaining why it was inappropriate. I find it hard to imagine that no other readers (Jews or otherwise) responded as I did. It was a stubborn moderation failure that lasted a day.

In a CBC report about a scuffle between Israeli forces and EU diplomats, one commenter stated that “Israel has behaved the same way, since they were a part of the Roman Empire”, and served as proof, their crucifixion of Christ. As with the example above, this comment lasted over 8 hours on CBC.ca, during which time, apparently no other readers (Jews or otherwise) responded as I did. Another stubborn moderation failure, where the moderation team apparently just couldn’t agree whether the comment met CBC submission guidelines. 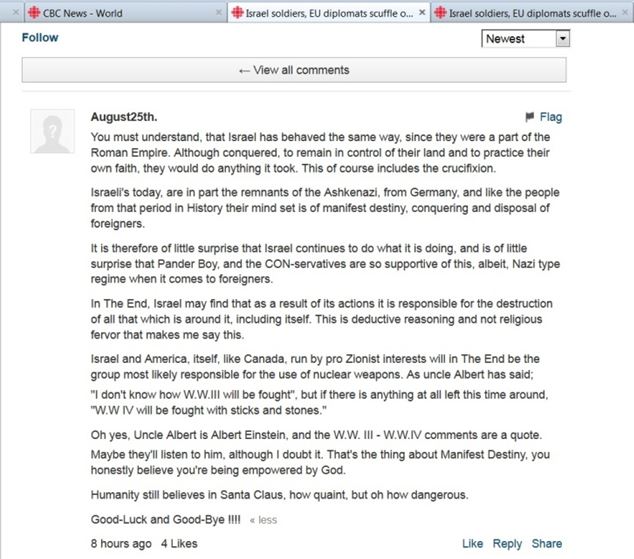 Most recently, the CBC reported on the death and funeral of the Israeli Sephardic Chief Rabbi. That story proved fertile ground for all sorts of comments, since it mixed the two most volatile ingredients of antisemitism: Judaism and Israel.

We’ve been regaled with stories of Jewish racism, and bogus quotes of how supremacy over others is part of mainstream Judaism: 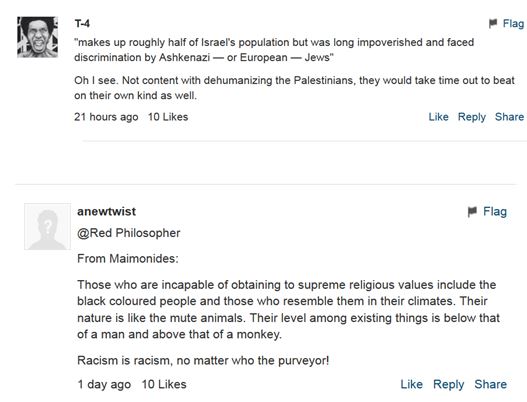 We have Jewish conspiracy theory, and their plan to take over (or control) the world. The evocative epithet “ZioNazis”, suggests a direct comparison of Jews/Zionists to the Nazis, but later on, other commentaters post similar, clearer comparisons.

And no anti-Israel/antisemitic festival would be complete without mention of the Protocols of the Elders of Zion, and how true they are.

So what happened at CBC.ca? Why did these objectionable comments pass moderation (as did other less offensive comments). Why did they remain online despite being flagged, and countered (by me, if not by other commenters)?

This isn’t a new issue.

Moderation at the CBC has been considered problematic in the past, anecdotally, and formally. The CBC contends that they deal with over 10,000 comments per day, and despite their precautions, problematic comments can’t completely be eliminated. That sounds like a rational and reasonable response.

Except that, as is clear from the examples above, some comments aren’t subtle. The racist intent can’t be missed if you’re actually reading the comment.

Furthermore, when an online comment is persistently “flagged” by readers, and has elicited outraged response comments, it seems curious that CBC moderators continue to ignore it. This kind of user-generated content turns our national broadcaster into a mouthpiece for neo-Nazis and other antisemites.

They have to do better. Moderation slip-ups are errors, but the persistent failure of moderators to remove blatant hate speech, is a failure on the part of the CBC.