Writing in the Manitoban, the University of Manitoba’s student newspaper on March 17, Liz Carlyle and Bassam Hozaima fittingly employed the word “imagine” to describe the State of Israel, since their view of Israeli society is based on fantasy borne of either appalling ignorance or prejudice. In direct opposition to Canadian values of 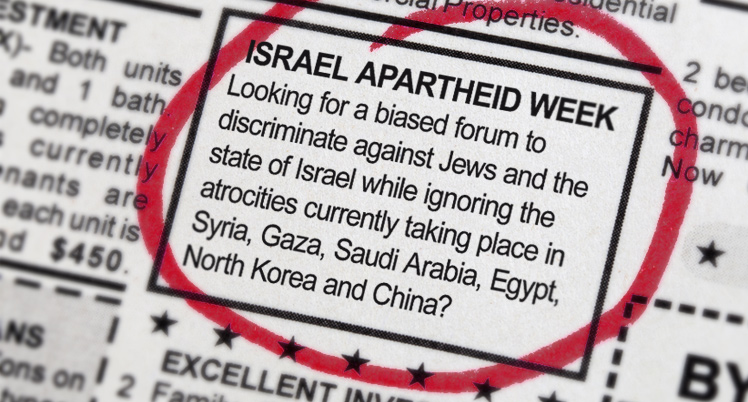 human rights, Israel “apartheid” week is the cynical brainchild of radical anti-Israel activists who believe they can fool Canadians into joining the cause of dismantling a democratic UN member state by quoting Nelson Mandela and comparing Israel to apartheid South Africa. Indeed, how else can this group of rabblerousers gain adherents for their sinister cause other then by inventing facts and spewing rhetoric? By having a little help from their friends at The Manitoban who not only published their screed, but have thus far refused to publish a counter op-ed setting the record straight.

Here are some real facts: The only country in the Middle East where apartheid is NOT practiced is in Israel. Not a single Jew is allowed to live in Gaza. According to the Palestinian Authority in the West Bank, not a single Jew would be allowed to live in a future Palestinian state. On the other hand, 20% of Israel’s population is Arab. Like all of Israel’s minorities, Arabs not only live in Israel but are equal under the law. Not so minorities elsewhere in the Middle East, such as in Lebanon where Palestinians are not allowed to practice certain professions or Saudi Arabia where women cannot leave home unaccompanied by a male, or Iran where gays are hanged publicly or elsewhere in the Middle East where Christians, Bahai and other minorities are persecuted relentlessly for their religious beliefs. Yet, anti-Israel activists are too busy sailing flotillas to support the Islamist regime in Gaza to notice or—heaven forbid—protest such appalling violations of human rights. Indeed, these activists prop up the Iranian proxy because of its steadfast and complete opposition to Israel’s very existence. How humanitarian.

As for the water libel (facts are anathema to these activists), Israel exports volumes of water to the West Bank greatly in excess of what the Oslo Accords had mandated. This is done, among other reasons, to compensate for the Palestinian Water Authority’s repeated failures to implement approved water projects. Over the past 20 years, the Palestinians have drilled at just one-third of sites identified for drilling in accordance with the Israel-PA Joint Water Committee, despite the fact that the international community has offered to finance the drilling of all sites.

The Palestinians refuse to build water treatment plants, despite their obligation to do so under the Oslo agreement. The international community has offered to build a desalination plant for the Palestinians in the Gaza Strip. The Palestinians have refused this gift. As for theft, it is the Palestinians who steal water by pirate tapping into pipes belonging to Mekorot, Israel’s national water company. As a result, Mekorot’s ability to supply water to Israelis and Palestinians alike has been compromised.

Lobbing libels at the State of Israel is a modus operandi of the “Israel Apartheid week” (IAW) crowd, preying as they do on the ignorance of well-intentioned humanistic minded students. Rather than helping to bridge differences and build a civic society ready to live side by side with Israel, they rely on negativity and advocate destruction using age old forms of hatred. IAW activists libel Israel so that those who support the democratic, Jewish state will expend their energy defending Israel from these accusations rather than exposing the bigoted, hateful objectives of IAW and BDS.

The next time you meet an “Israel apartheid week” supporter, ask them if they are organizing a ‘Syrian Apartheid” week, day or even an hour in protest of the heart-wrenching siege and starvation of Palestinians in the Yarmouk refugee camp in Syria by the Assad regime. Ask if they have a kiosk in support of gays in Iran, women in Saudi Arabia, Christians in Egypt or journalists in the West Bank. China? North Korea? Anything?

IAW supporters don’t really care about human rights or the Palestinians, however, because IAW is not about human rights or the Palestinians. It’s about the Jews and the assault on the right of Jews to self-determination as a democratic nation among the 22 non-democratic Arab states in the Middle East.  That’s all you really need to know about “Israel apartheid Week”.