What the media missed in its coverage of...
Combating Antisemitism In The Media: HRC Interviewed By...
Sheridan College Professor Engages in Hate By Dehumanizing...
Unmasking Iran’s Global Ambitions with Guest Meir Javedanfar...
Shemittah: One Of Many Arrows In The Quiver...
The Inside Story On Israel’s Losing Battle With...
The Media’s Double Standards in Covering Palestinian Casualties...
Canadian Journalists Who Criticized Israel Fail To Speak...
Reflections of a Kuwaiti Muslim Who Became a...
After Featuring Exhibit Glorifying Palestinian Terrorism, Canadian War...
Home Daily Brief The Kidnapped Teens and the 3-Fingered Salute

The Kidnapped Teens and the 3-Fingered Salute

Montreal Gazette letter writer Kathryn Gabinet-Kroo laments the lack of media coverage allotted to the tragedy of the abduction of the Israeli teenagers and the African schoolgirls kidnapped by Boko Haram.

As Israel searches for the kidnapped Israeli teens, one can also lament the lack of coverage of the lust for terrorism indoctrinated in Palestinian children by the Palestinian leadership which has been reflected, among other things, in the passing out of candies and the 3-fingered salute, a new low and sad commentary on Palestinian society. 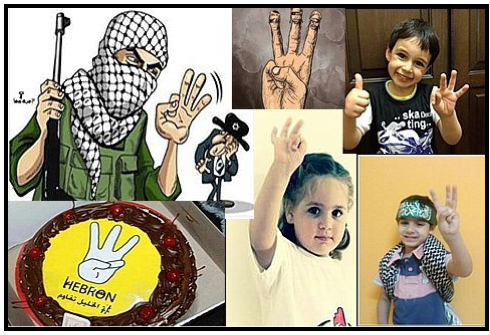