The Iran Nuclear Deal is Appeasement to Terror 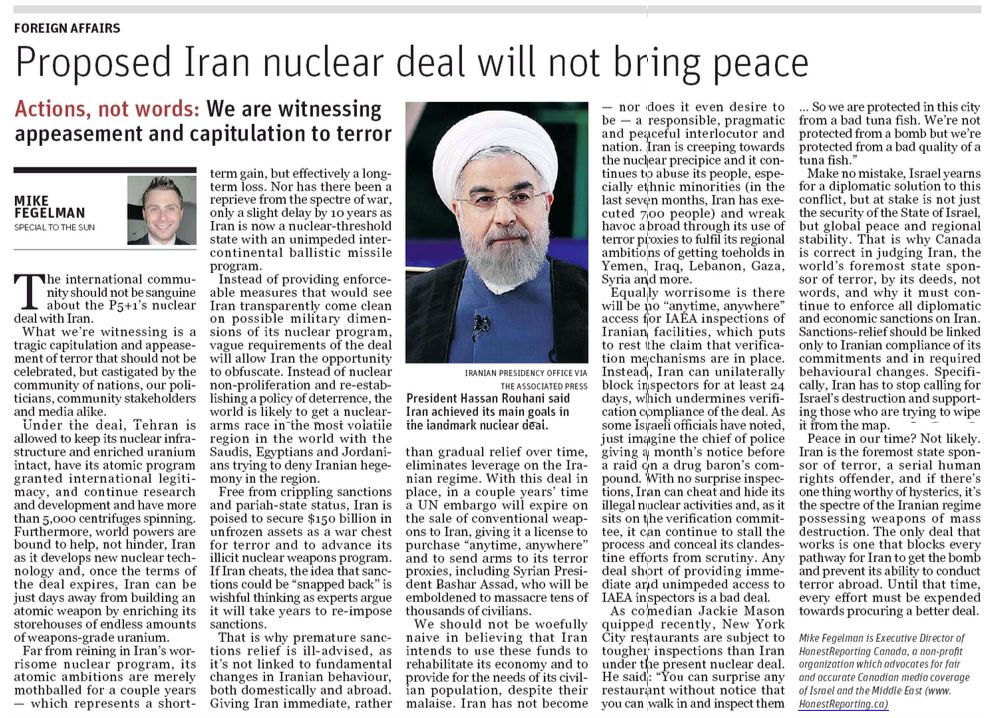 The international community should not be sanguine about the P5+1’s nuclear deal with Iran.

What we’re witnessing is a tragic capitulation and appeasement of terror that should not be celebrated, but castigated by the community of nations, our politicians, community stakeholders, and media alike.

Under the deal, Tehran is allowed to keep its nuclear infrastructure and enriched uranium intact, has its atomic program granted international legitimacy and is allowed to continue research and development and have over 5,000 centrifuges spinning. Furthermore, world powers are bound to help, not hinder, Iran as it develops new nuclear technology and once the terms of the deal expires, Iran can be just days away from building an atomic weapon by enriching its storehouses of endless amounts of weapons-grade uranium.

Far from reining in Iran’s worrisome nuclear program, its atomic ambitions are merely mothballed for a couple years which represents a short-term gain, but effectively a long-term loss. Nor has there been a reprieve from the specter of war, only a slight delay by 10 years as Iran is now a nuclear-threshold state with an unimpeded intercontinental ballistic missile program. Instead of providing enforceable measures that would see Iran transparently come clean on possible military dimensions of its nuclear program, vague requirements of the deal will allow Iran the opportunity to obfuscate.

Instead of nuclear non-proliferation and re-establishing a policy of deterrence, the world is likely to get a nuclear arms race in the most volatile region in the world with the Saudis, Egyptians and Jordanians trying to deny Iranian hegemony in the region. Free from crippling sanctions and pariah-state status, which will free up assets worth $55 billion according to the U.S. Treasury, and up to $150 billion according to critics of the deal. If Iran cheats, the idea that sanctions could be “snapped back” is wishful thinking as experts argue it will take years to re-impose sanctions. That is why premature sanctions relief is ill-advised as it’s not linked to fundamental changes in Iranian behaviour, both domestically and abroad.

Giving Iran immediate, rather than gradual relief over time eliminates leverage on the Iranian regime. With this deal in place, in five years time a UN embargo will expire on the sale of conventional weapons to Iran, giving it a license to purchase “anytime, anywhere” and to send arms to its terror proxies, including Syrian President Bashar Assad who will be emboldened to massacring tens of thousands of more civilians.

We should not be woefully naïve in believing that Iran intends to use these funds to rehabilitate its economy and to provide for the needs of its civilian population, despite their malaise. Iran has not become — nor does it even desire to be — a responsible, pragmatic and peaceful interlocutor and nation. Iran is creeping towards the nuclear precipice and it continues to abuse its people, especially ethnic minorities (in the last seven months, Iran has executed 700 people) and wreaks havoc abroad through its use of terror proxies to fulfil its regional ambitions of getting toeholds in Yemen, Iraq, Lebanon, Gaza, Syria and more.

Equally worrisome is that there will be no “anytime, anywhere” access for IAEA inspections of Iranian facilities which puts to rest the claim that verification mechanisms are in place. Instead, Iran can unilaterally block inspectors for at least 24 days which undermines verification compliance of the deal. As some Israeli officials have noted, just imagine the chief of police giving a month’s notice prior to a raid on a drug baron’s compound. With no surprise inspections, Iran can cheat and hide its illegal nuclear activities and as it sits on the verification committee, it can continue to stall the process and conceal its clandestine efforts from scrutiny. Any deal short of providing immediate and unimpeded access to IAEA inspectors is a bad deal.

As comedian Jackie Mason quipped recently, New York City restaurants are subject to tougher inspections than Iran under the present nuclear deal. He said: “Do you know that in the restaurants of New York, they have an inspection system. You can surprise any restaurant without notice that you can walk in and inspect them… So we are protected in this city from a bad tuna fish. We’re not protected from a bomb but we’re protected from a bad quality of a tuna fish.”

Make no mistake, Israel yearns for a diplomatic solution to this conflict, but at stake is not just the security of the State of Israel, but global peace and regional stability. That is why Canada is correct in judging Iran by its deeds, not words and why it must continue to enforce all diplomatic and economic sanctions on Iran. Sanctions relief should be linked only to Iranian compliance of its commitments and in required behavioural changes. Specifically, Iran has to stop calling for Israel’s destruction and supporting those who are trying to wipe it from the map.

Peace in our time? Not likely. Iran is the foremost state sponsor of terror, is a serial human rights offender, and if there’s one thing worthy of hysterics: it’s the specter of the Iranian regime possessing weapons of mass destruction. The only deal that works is one that blocks every pathway for Iran to get the bomb and that prevents its ability to conduct terror abroad. Until that time, every effort must be expended towards procuring a better deal.