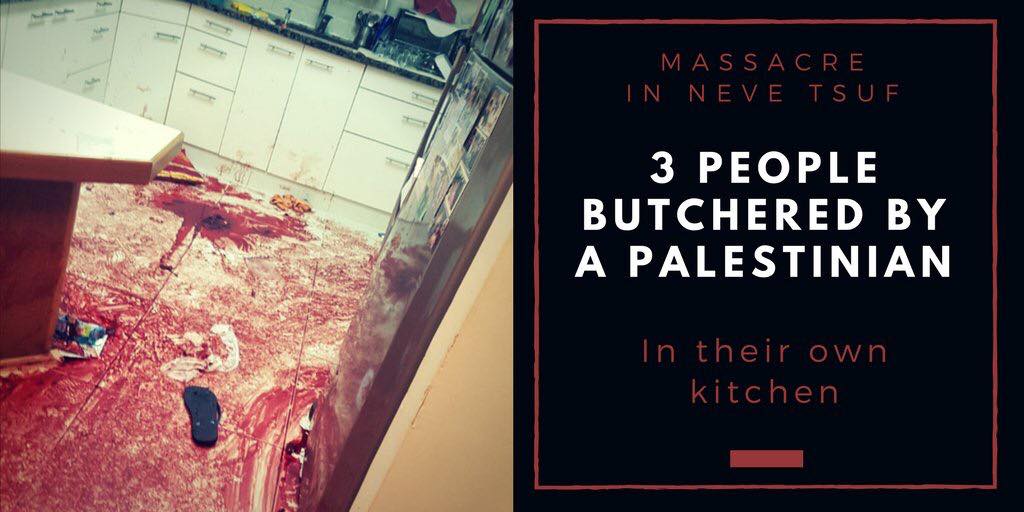 Last week, three Israeli-Arabs carried out a brutal terrorist attack that killed two Israeli-Druze policemen on the Temple Mount. The terrorists and their accomplice smuggled and hid weapons near Islam’s third holiest site, the Al Aqsa Mosque, and in an effort to prevent such an attack from happening again, Israel installed metal detectors to safeguard everyone (Jews and Muslims alike). Many Palestinian and Arabs objected to this security measure, saying that Israel was trying to change the status quo on the Temple Mount, except there was no foundation to this malicious allegation.

Palestinians who were incited, took part in violent riots where molotov cocktails, rocks, and petrol bombs were thrown at Israeli officers who in self defence killed three Palestinian rioters, one whose petrol bomb had prematurely exploded.

Gruesomely, a Palestinian terrorist named Omar al-Abed, descended on the home of the Solomon family in the west bank settlement of Halamish (Neve Tsuf) and brutally stabbed three Israelis to death (Pictured below are Yosef: a grandfather and his two grown children, Chaya and Elad) while seriously injuring the matriarch of the family, Tovah, as they were enjoying their Sabbath meal. The terrorist’s last testament on Facebook saw him claim he was coming to the defence of the “desecration” of the Al Aqsa Mosque. Meanwhile, the Palestinian terrorist is being nursed back to health in an Israeli hospital. 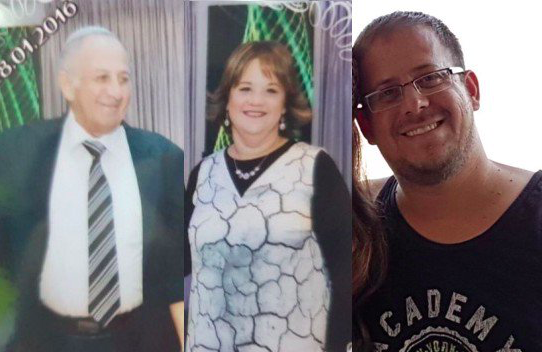 On Sunday afternoon, two rockets were fired from Hamas-controlled Gaza. Yesterday evening, a security guard at Israel’s embassy in Jordan, was attacked by a Jordanian with a screwdriver. In self defence, the guard opened fire killing the Jordanian attacker and another Jordanian. Earlier today, a Palestinian terrorist stabbed an Arab-Israeli man in Petah Tikvah.

Naturally, these recent attacks and escalations commanded considerable Canadian media coverage. What follows is a critical analysis of the tensions and terror on the Temple Mount and in the region.

On July 21, CBC News.ca, CTV News.ca, Globe and Mail, Toronto Star, National Post, Montreal Gazette, Hamilton Spectator, and Ottawa Citizen, all drew moral equivalences by equating three Israeli terror victims who were murdered at their home by a Palestinian terrorist, with the deaths of three Palestinians who took part in violent riots. Check out the following headline fails: 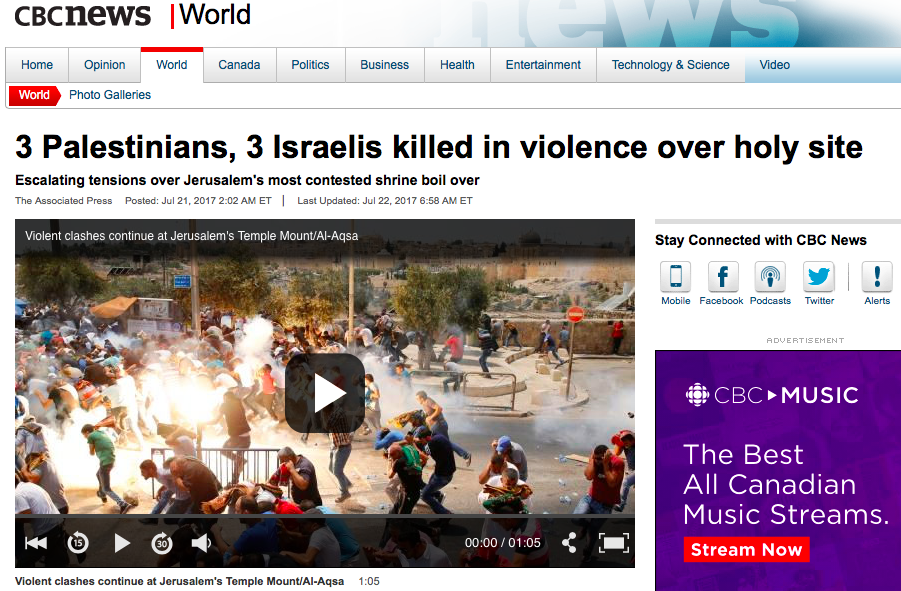 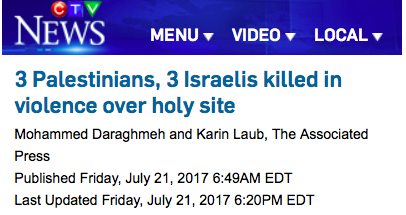 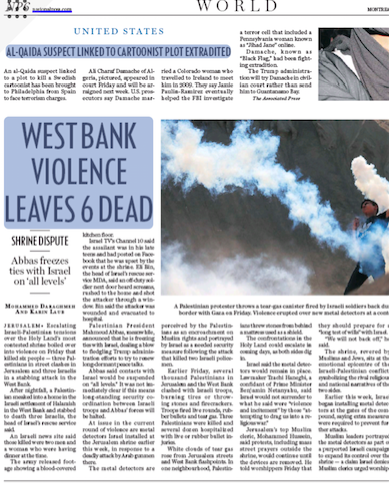 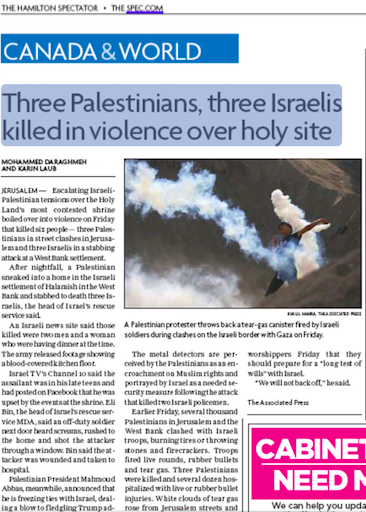 On July 21, CBC National even claimed that 6 Palestinians were killed, not 3: (A complaint has been filed by HRC to CBC)

On July 21 at 6:08pm, CBC Radio carried a report by Mideast correspondent Derek Stoffel that reported that “three Israeli settlers also died in a separate incident in the west bank“. Importantly, there was no information given in the CBC’s introduction or in Stoffel’s report mentioning that they were murdered by a Palestinian terrorist, they didn’t just die. Listen to this report by clicking here. (Please note that HRC has communicated our concerns directly to CBC executives about this report).

Most egregiously, HonestReporting Canada has yet to find a Canadian media outlet that has shown photos or broadcast video footage of the odious stabbing attack at the Solomon’s home, or even, images identifying the Israeli victims. Instead, Canadian news coverage was rife with photos and video clips of Palestinians rioting juxtaposed with Israeli police in riot gear.

Back to the CBC, Mideast correspondent Derek Stoffel posted the following Tweet on July 21 which HonestReporting Canada has asked him to confirm or retract: 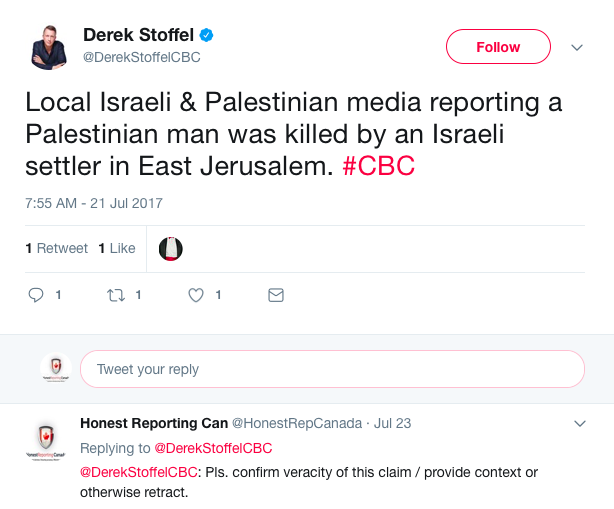 On July 22, CBCNews.ca featured Associated Press coverage claiming that Palestinian President Mahmoud Abbas is “… a staunch opponent of violence…” Both AP and CBC News inserted their personal opinions into their coverage as this claim is subjective in nature and was not in attribution. Many Israelis and others would contend that Abbas has promoted and not prevented terror. This is the same Abbas that when an Israeli husband and wife were murdered in a drive-by shooting in the west bank last year, Abbas’ Fatah party glorified their murder as being legal and a Palestinian “national duty”. Abbas’ Fatah movement claimed credit for the attack. Let’s also not forget Abbas’ incendiary speech at the UN where this Palestinian leader tacitly gave a green light for Palestinians to commit terror. In a speech on Palestinian TV on September 16th, Abbas said “we bless every drop of blood spilled for Jerusalem. With the help of Allah, every shaheed (martyr) will be in heaven… Al-Aksa is ours and so is the Church of the Holy Sepulchre. They [Jews] have no right to desecrate them with their filthy feet.” (HRC has filed a complaint about this matter).

This same CBC report carried a misleading subheadline which failed to acknowledge that 3 Israelis had succumbed to their wounds which occurred during the recent Palestinian terror attack… they didn’t just get stabbed after all:

On the bright side, we take note that on June 23, CTV National News correspondent Glen McGregor referred to the attack on the Temple Mount that saw two Israeli police officers murdered by Arab terrorists as a “terror” attack. This is a welcome change at CTV News that we hope will become standard practice.

Meanwhile, on July 23 at 8:03am, CBC Radio broadcast a report by Mideast correspondent Derek Stoffel who seemingly cast doubt that Palestinian terrorist Omar al-Abed committed the attack on the Solomon family in Neve Tsuf. Stoffel reported that: “Later today, three Israelis will be buried. They were stabbed to death by a suspected Palestinian attacker in their home in a west bank settlement Friday night.” Listen to this report by clicking here.  Importantly, CBC’s own coverage on its website doesn’t include any qualifiers that considered the terrorist a mere suspect. CBC itself acknowledges that the “… 20-year-old Palestinian identified as Omar al-Abed jumped over the fence of the Halamish settlement near Ramallah and entered a home, surprising a family that was celebrating a new grandchild during their traditional Sabbath dinner. He stabbed to death Yosef Salomon, 70, and his adult children, 46-year-old Chaya and 35-year-old Elad, while his daughter-in-law escaped to a separate room to shelter her young children.” (HRC has communicated our concerns with CBC directly about this matter).

Finally, on July 23, CBC News.ca featured Associated Press coverage of the terror attack on Israel’s embassy in Jordan and included this misleading statement:

“Many of Jordan’s seven million citizens are of Palestinian origin. They or their parents or grandparents were expelled or fled to Jordan in the fighting that accompanied the creation of Israel in 1948.”

As Jewish Virtual Library notes, “The Palestinians left their homes in 1947-48 for a variety of reasons. Thousands of wealthy Arabs left in anticipation of a war, thousands more responded to Arab leaders’ calls to get out of the way of the advancing armies, a handful were expelled, but most simply fled to avoid being caught in the cross fire of a battle.” While others remained and became Arab citizens of Israel.

Conclusion: By and large, Canadian media coverage of recent terror attacks on Israelis and tensions on the Temple Mount was not only unfair, lacked balance, and in many times was inaccurate, but more often than not, Canadian news outlets produced coverage that whitewashed Palestinian terror attacks, drew moral equivalences and presented Israel as being a bellicose aggressor.

HRC is working round-the-clock ensuring that Canadian media outlets are setting the record straight. To support our continued efforts to fight media bias against Israel, please make a generous donation by clicking here.