Tell The Toronto Star: Barghouti Is No Mandela

There seems to be no shortage of journalists willing to buy into the idea that Palestinian arch-terrorist Marwan Barghouti should be let off the hook for multiple counts of murder. In some cases, even while acknowledging Barghouti’s heinous crimes, reporters go a step further and compare him to historical figures such as Napoleon and Nobel laureate Nelson Mandela, who was imprisoned for 27 years by South Africa’s apartheid regime before becoming the country’s president. 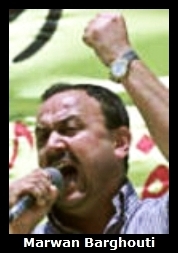 “Many say comparisons with Nelson Mandela are exaggerated, but the parallels do exist.

Like the hero of South Africa’s long struggle against white rule, Barghouti joined an established liberation organization and soon began to inveigh against its older leaders’ complacency and corruption.

Like Mandela, his initial political credibility arose from his involvement in street-level politics.

Like Mandela, Barghouti was soon captured by a more powerful enemy, charged and convicted of violent crimes and locked away.

Seized by Israeli forces in April 2002, he was convicted and sentenced two years later and has remained behind bars ever since.”

But the comparison of Barghouti to Mandela comes up short on several counts.

“The armed struggle was founded on two fundamental principles: First, violence should not be directed against civilians but against property and military targets. This derived from the ANC’s history of non-violent protest, and its belief in the principle of non-violent political action to effect change as preached and practised by Mahatma Gandhi in fighting British rule in India….

Second, not killing whites was a pragmatic strategy aimed at keeping the door open for them to change. The argument was that violent and indiscriminate attacks would so frighten whites about their future that their determination to resist change would be deepened. Giving this approach even greater depth was the fact that whites were members of the ANC, and some occupied high leadership positions, alongside black, colored and Asian South Africans.”

Unlike Mandela, who coordinated a sabotage campaign against military and government targets, Barghouti was convicted in a civilian court on five counts of murder, with responsibility for the grisly killing of a Greek monk and diners in a seafood restaurant. (He was acquitted of additional charges; see the full list here.) While he remains an influential player in Palestinian politics, Barghouti is a murderous terrorist who, under the laws of any democratic society, deserves to remain behind bars. Even if Barghouti were to be released at some future date for practical reasons, that would not diminish his crimes or the legitimacy of putting him behind bars in the first place.

Reporters who compare Barghouti and Mandela may not appreciate the historical context in which this false comparison is made. If Barghouti is another Mandela, then by implication, Israel is another apartheid South Africa. And if apartheid South Africa was an illegitimate regime that needed to be isolated and replaced, then logic dictates that Israel, too, is illegitimate and needs to be replaced.

While the slanderous claim that Israel is an apartheid state has been widely discredited, news organizations unwittingly reinforce it through falsehoods such as the Barghouti-Mandela analogy. Portraying liberal, democratic Israel as a new incarnation of apartheid South Africa is the centerpiece of current efforts to delegitimize the Jewish state. Israel’s detractors use the apartheid claim as a false moral justification for boycotting Israel in academic, political, economic and other realms; but impartial journalists have no business reinforcing these false ideas.

For information on why the apartheid claim is false, see the Anti-Defamation League, Myths & Facts and “It’s Not Apartheid” in Slate.com.

How You Can Make a Difference

Tell the Toronto Star that the Barghouti-Mandela comparison is false and dangerous. Point out that portraying a convicted murderer of civilians as a new Nelson Mandela is an affront not only to Barghouti’s victims, but also to liberal democratic values such as the right to life and the rule of law.

Send your letter to lettertoed@thestar.ca or via fax to 416-869-4322. To be considered for publication, letters must include sender’s name, address and phone number; street names and phone numbers will not be published.

Pointers for contacting the media: State your position clearly in your own words, remain rational and avoid being abusive, and contact us at action@honestreporting.ca to tell us you took action.