Tell The Globe and Mail that Jerusalem is Israel’s Capital, Not Tel Aviv 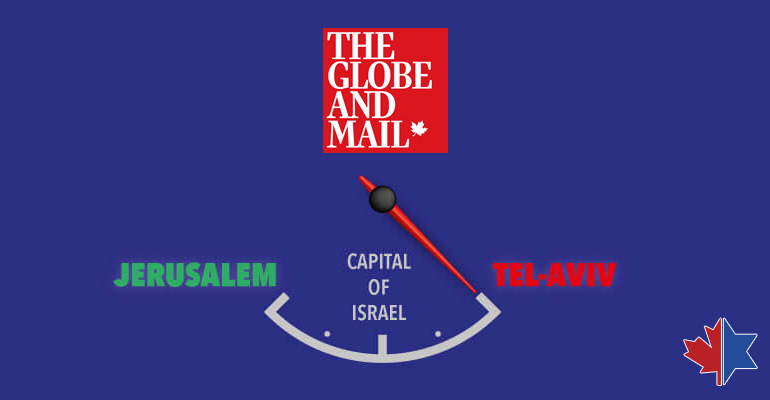 What follows is the saga of how the Globe and Mail refuses to accept that Jerusalem is the capital of Israel and how it wrongly claims that Tel Aviv, Israel’s financial and diplomatic centre, is the Jewish state’s capital.

On December 9 in print and on the Globe’s website, columnist Doug Saunders erroneously wrote (emphasis added):

U.S. President Donald Trump’s move this week to recognize Jerusalem as Israel’s capital, and his pledge to move, some day, the U.S. embassy from the internationally recognized capital of Tel Aviv to Jerusalem, was on a basic level one of his easier campaign promises to keep.”

This is wholly incorrect. While many countries have embassies located in Tel Aviv, they do not regard it as Israel’s capital. While Mr. Saunders is entitled to his own opinions, he’s not entitled his own facts. As such, on December 11 we called on the Globe to issue a correction to set the record straight.

Responding to our concerns only on December 18, Globe and Mail Public Editor Sylvia Stead replied to HRC saying only:

It was updated to say de facto (as in the operating capital) as opposed to legal capital.”

U.S. President Donald Trump’s move this week to recognize Jerusalem as Israel’s capital, and his pledge to move, some day, the U.S. embassy from the internationally recognized de facto capital of Tel Aviv to Jerusalem, was on a basic level one of his easier campaign promises to keep.”

In response, we pointed out that the Globe has to substantiate that the world: (“internationally recognized”), considers Tel Aviv as the de facto capital of Israel. Instead, the world just simply has its embassies there. There is a world of difference and a correction is called for. Of particular importance, in 2012, HonestReporting prompted the British newspaper the Guardian to acknowledge and issue a correction for wrongly labeling Tel Aviv as Israel’s capital.

To date, the Globe has failed to substantiate its claim. Lastly, what the Globe referred to as an “update” to Mr. Saunders’ commentary is really an attempt at a correction, though the Globe failed to publish a correction notice in either the print or online versions.

HonestReporting Canada encourages all of its subscribers to take umbrage with the Globe’s efforts to delegitimize Jerusalem’s status as Israel’s capital. Please email Globe and Mail Public Editor Sylvia Stead to point out that Jerusalem is Israel’s eternal capital, not Tel Aviv. Please send emails to: sstead@globeandmail.com and Tweet Ms. Stead directly at @SylviaStead.