The Asper Foundation in Winnipeg, Manitoba is heading up a campaign to build the World’s Jewish Museum (WJM) in Tel Aviv, Israel.

The museum is being designed by world-renowned architect Frank Gehry, whose works include the titanium-clad Guggenheim Museum in Bilbao, Spain; Walt Disney Concert Hall in downtown Los Angeles and the Louis Vuitton Foundation in Paris, France.

Given the hardships and complexities brought on by the COVID-19 pandemic, instead of hosting a live gala this year, the WJM fundraising team is hosting a virtual event on Tuesday, October 13 for North American audiences and another event on Wednesday, October 14 for European and Israeli audiences where there will be a virtual flight to Israel aboard El Al Airlines to have a preview of the new Museum. 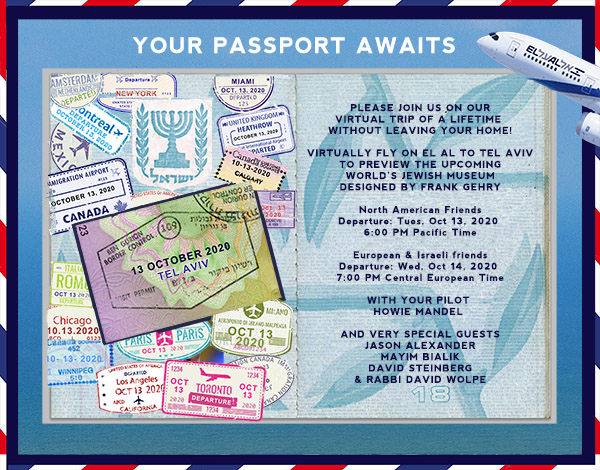 Captaining the flight to Israel will be Canadian comedian and television personality Howie Mandel who will be joined by a number of special guests acting as tour guides including: Jason Alexander, Mayim Bialik, David Steinberg and Rabbi David Wolpe.

The WJM website has background information on the Museum and links to the virtual gala event with information on how to become a sponsor or to purchase a ticket(s).

There will be some surprises for those who tune in live. We hope to see you there (electronically, at least!)