In the Ottawa Citizen and Edmonton Journal today, HRC Executive Director Mike Fegelman argued that supporting Israel is the only morally defensible approach: “Israel is an imperfect country with many criticisms to be made of it, but its need to defend itself against terror rockets is not one of its faults.”

Read our commentary on the Citizen’s website or immediately below: 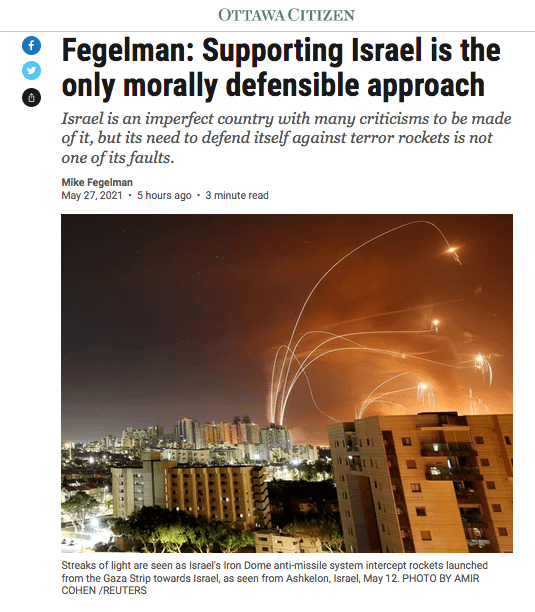 Andrew Cohen argues that “reflexive devotion” for Israel by right of centre politicians, primarily in the United States, is a danger to Israel’s security, or in his words, “threatens Israel’s survival far more than do the Mullahs of Iran.”

Nobody would argue, and to the best of my knowledge, no elected figure or communal representative in either Canada or the U.S. has ever argued, that Israel is perfect or beyond reproach. Even the most stalwart supporters of Israel in North America recognize Israel’s faults. But what is noteworthy is that they recognize that those faults pale in comparison to the dangers of inaction and apathy on our part.

Politicians do not have the benefit of the theoretical realm, of course. They must deal with the reality that Israel, as Cohen acknowledges, is the only liberal democracy in the region, a state that guarantees freedom of religion, freedom of association, and the same rights we enjoy here in the democratic West. Israel is not perfect, but we must deal with reality as it is, not as we wish it to be.

Israel now finds itself in only the latest episode of a decades-long armed conflict with Islamist terrorists, whether from Hamas, Islamic Jihad, Hezbollah or their patron states, Syria and Iran. In such a situation, being a stalwart supporter of Israel is not an intellectually lazy approach, but is in fact, the only morally defensible one.There can be no middle ground between a liberal democratic state like Israel, and a medieval death cult like Hamas, which purposefully sends 4,000+ rockets hurtling into Israeli population centres, striving to kill and maim as many Jews as possible. Supporting Israel, whether diplomatically, militarily, rhetorically or otherwise, is the moral obligation of a free country like Canada or the U.S.

Politicians, whether Republicans or Democrats, who are supporting Israel during this most recent Hamas escalation, are supportive because during a time of crisis, when rockets are flying and innocent civilians are dying, Hamas and Islamic Jihad seek and crave international legitimacy which will make them appear as peers to Israel. Israel is an imperfect country with many criticisms to be made of it, but its need to defend itself against terror rockets is not one of its faults.

Moreover, the Palestinians are the biggest victims when the world does not hold their leadership to account. Palestinians living in the Gaza Strip do not have easy lives. They live in squalor and poverty, and have very limited mobility. But the question is not whether they are suffering; the question is how can Western countries help to make the lives of both Israelis and Palestinians better.

Therefore, it’s critically important that policymakers in the West recognize that the more Israel is protected, the more the Palestinians are protected too. That is, in fact, part of the logic of the Iron Dome missile interceptor used by Israel, which reduces civilian casualties and allows Israel to deal with Hamas in the most surgical of ways, thereby minimizing suffering. The Iron Dome technology was developed in Israel, but funded in part by the U.S., under then-Democratic president Barack Obama.

Cohen argues that widespread, reflexive support for Israel in Western capitals is a bigger threat to the Jewish State than the Iranian regime in Tehran, but that is sophistry. The biggest threat Israel faces is a fanatical Islamist agenda to wipe the Jewish state, and its citizens, from the map. And as dangerous and deadly as Palestinian rockets from Gaza have proven, they are just a taste of the capacity of Hezbollah and Iran. If Israel was not given the diplomatic and other support to effectively and meaningfully reduce the capacity of Hamas and Islamic Jihad in the current round of violence, it would simply be a short few years until a renewed, and likely even deadlier, burst of violence.

The best way to prevent that further violence, therefore, is to offer the kind of “reflexive” support that we see among some U.S. and Canadian politicians. While it may strike some as far from ideal, in fact it is likely the surest guarantor of long-term peace.