Terror groups, their state sponsors and the banks that provide them financial services can now be sued in Canada. Last year, the Canadian federal government enacted the Justice for Victims of Terrorism Act, which lifted state immunity from countries that sponsor terrorism. Iran was designated a state sponsor last September, along with Syria. In the first case to be filed under the new anti-terrorism legislation, Dr. Sherri Wise, 43, filed the notice of claim in British Columbia Supreme Court on Friday. It names the Islamic Republic of Iran and the powerful ministry of security as defendants. It does not seek a specific dollar amount in damages.

Dr. Wise was volunteering at a Jerusalem dental clinic for underprivileged kids when she was badly wounded when three bombs packed with nails and glass exploded. She is suing Iran because it has long armed, financed and trained Hamas to conduct terror attacks.

According to the National Post, Iran has millions of dollars worth of assets in Canada. A list released earlier this month by the Department of Foreign Affairs said Tehran owns several Ottawa properties and has 14 Canadian bank accounts holding at least $2.6-million. An Ontario judge has frozen the accounts at the request of U.S. terror victims. 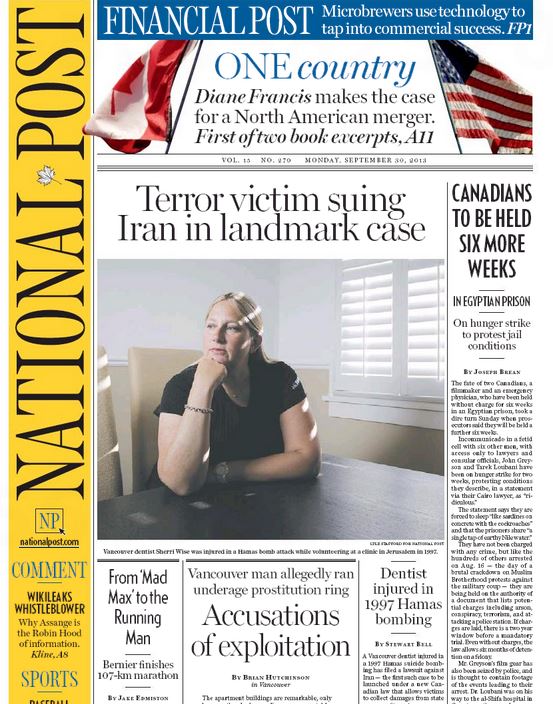