Israeli border police stationed near the Tapuach Junction in the West Bank averted a potential terror attack. A man wearing an overcoat lined with bombs was stopped. 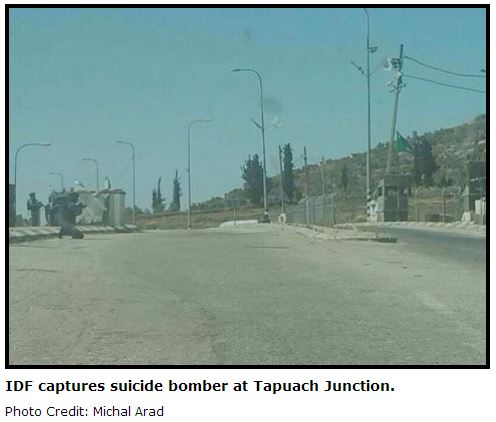 Demolition experts blew up the bombs.

The Arab man in his 20’s was wearing an overcoat despite 95 degree Fahrenheit heat, which caused the police to become suspicious. Tapuach Junction connects traffic from Jerusalem, Ariel and Tel Aviv. Last April, an Arab terrorist stabbed and killed an Israeli man, father of 5 children at the junction.

The nearby strategic checkpoint, a mere 30 meters north of where the terror attack took place, that protected the area was removed a few months ago, under orders of former Defense Minister Ehud Barak, due to pressure from the radical-leftwing NGO Machsom Watch.