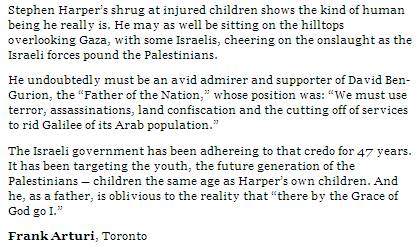 Specifically, the following statement of Mr. Arturi’s has no validity: “He undoubtedly must be an avid admirer and supporter of David Ben-Gurion, the “Father of the Nation,” whose position was: “We must use terror, assassinations, land confiscation and the cutting off of services to rid Galilee of its Arab population.”

HRC notified the Star’s Bureau of Accuracy about the fake quote conjured up by Mr. Arturi and other anti-Israel activists, asking if the Star could confirm the veracity of this quote, failing which, we noted that this statement wasn’t worthy of publication.

Responding to our concerns, the Star’s Public Editor, Ms. Kathy English, removed this quote from the letter as it could not be verified. Ms. English wrote the following to HRC Executive Director Mike Fegelman on August 13:

I have now heard back from Dr. Michael Bar-Zohar, the biographer of David Ben-Gurion.

He confirms that the quotation in question that appeared in a reader’s Letter to the Editor online has never appeared in his book about Ben-Gurion or any other of his writings and expresses the view that it is “absolutely false.”

I have also done considerable research and see that this is indeed a quotation that is widely circulated online as being the words of David Ben-Gurion – and also widely disputed.

Given all this, the Star will remove this from the reader’s letter and include a correction note to make clear that a quotation was removed as it could not be verified.

The following clarification noticed was commendably issued by the Star:

Clarification: Aug. 13, 2014: The letter above was edited from a previous version that included a disputed quotation attributed to David Ben-Gurion, the first prime minister of Israel. The Star could not verify the quote.