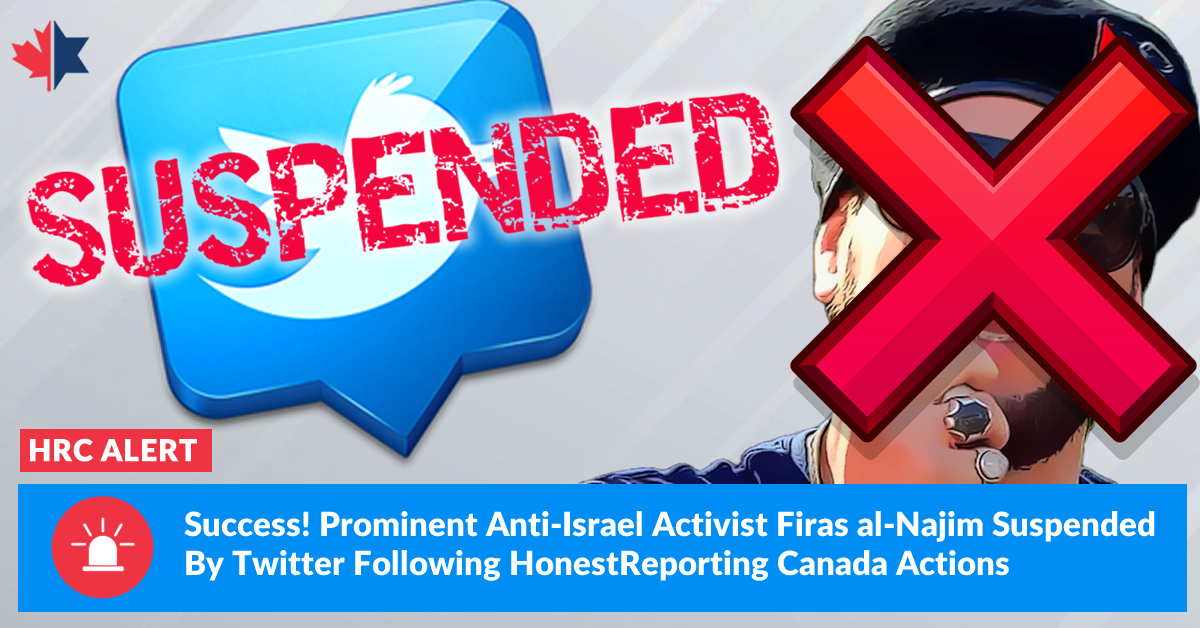 Firas al-Najim, one of Canada’s most prominent anti-Israel activists who has been accused of repeatedly spreading 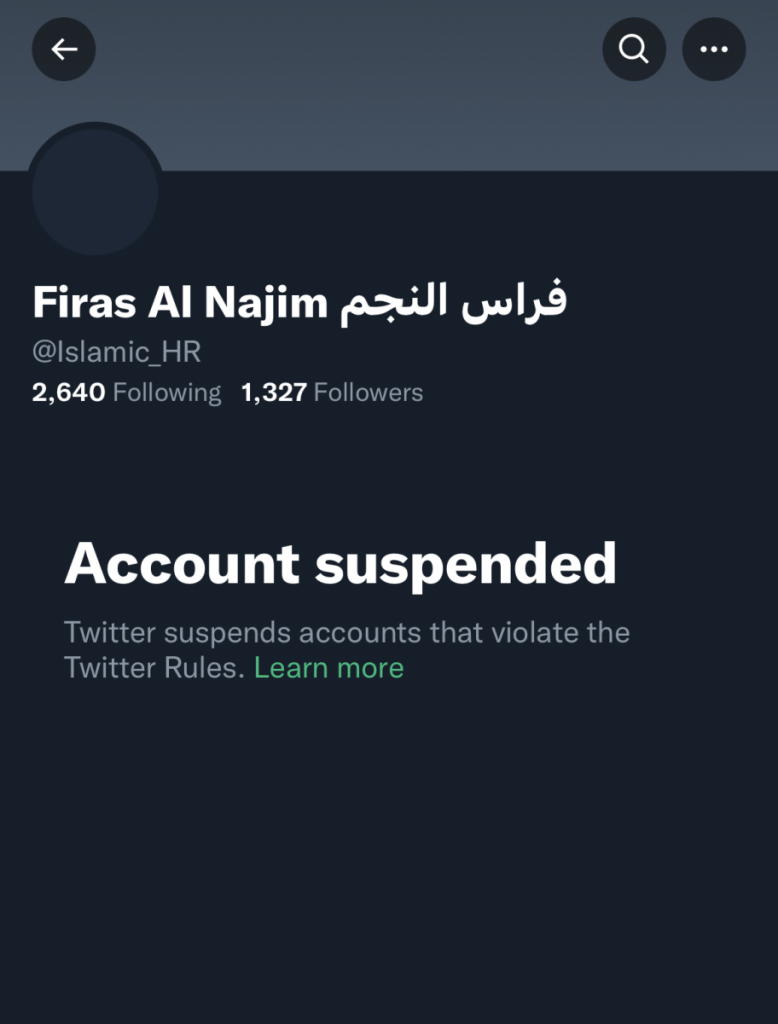 Al-Najim, who leads an organization called Canadian Defenders for Human Rights (CD4HR), has been the subject of a number of HonestReporting Canada alerts (see here, here, and here) and who most recently used his Twitter account to accuse Jews of being prophet-killers.

Unfortunately, this only scratches the surface of al-Najim’s activity, both on social media and off.

One photo he posted this past week featured the text “Support the upcoming #Intifada,” alongside al-Najim holding a large rock, likely referencing the widespread use of rocks and stones to injure and murder Israeli civilians during the Palestinian intifadas, or uprisings, which could be seen by some readers as an incitement to violence.

He has also used his social media platform to promote the activities of terrorist organizations.

In one recent post, he made references to “@israel’s defeat in 2006 by the honourable Lebanese #Hezbollah resistance democratically elected party,” followed by the hashtag “#LongliveNasrallah,” referring to the group’s leader, Hassan Nasrallah. 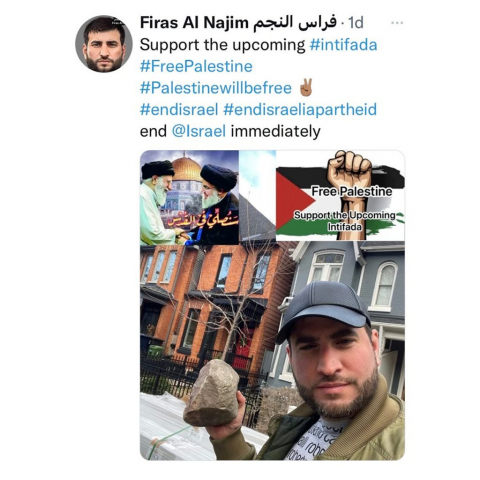 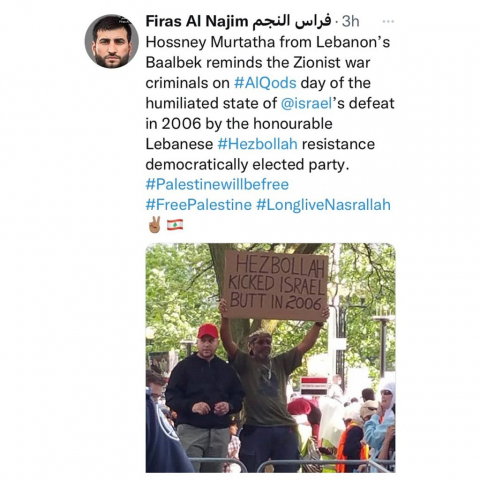 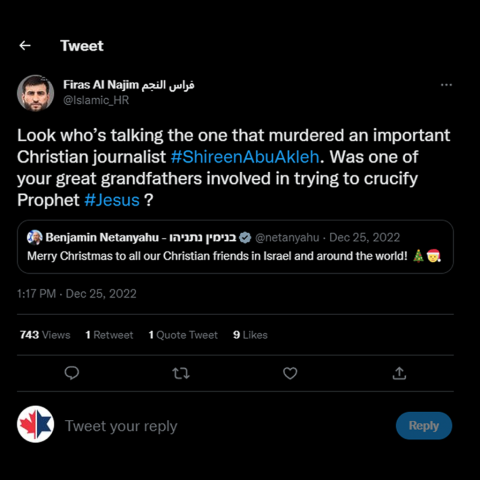 Hezbollah is listed as a terrorist entity under Public Safety Canada, and is known for its terrorist actions against Israel and Jews worldwide, including the 1994 bombing of a Jewish community centre in Buenos Aires, Argentina.

In October 2022, al-Najim attended a major event hosted by UJA Federation of Greater Toronto, where he harassed attendees, berating them for their support for Israel, and yelled at an elderly Holocaust survivor.

On Canada Day 2022, alongside a small group of provocateurs, he participated in a protest outside an Israeli-themed store in the Toronto suburb of Thornhill, where they verbally harassed shoppers until police offers had to intervene and escort Al-Najim and his fellow protesters away.

In October, he was alleged to have driven at high speed into a group of protesters opposed to the Iranian regime, yelling at them, before narrowly avoiding them and speeding away. Subsequently, he was arrested and charged by York Regional Police for dangerous operation of a motor vehicle, flight from police and possession of dangerous weapons.

Before being removed from TikTok, he had used the platform to, in part, falsely accuse Israel of practicing genocide against Palestinians. In one video, entitled #StopPalestinianHolocaust, he said “On the Holocaust Remembrance Day, we want to talk about the Palestinian Holocaust that is happening every minute and every hour inside the holy occupied land of Palestine that they call Israel.”

These important successes, first on TikTok and now on Twitter, are critically important because they remove the ability of a propagator of disinformation, hate and intolerance to exploit social media platforms to disseminate hateful messages to thousands upon thousands of people.

While there is certainly a place on social media and beyond for disagreement on topics related to Israel, inciting hatred and promoting a terrorist organization cannot be permitted, and HonestReporting Canada is pleased that Twitter has followed TikTok in making this important decision.

But this step by Twitter is not the result of one single report filed with the social media company. It follows the active engagement by HonestReporting Canada subscribers in adding their voice, filing reports with Twitter for al-Najim’s activities and posts, and making sure that the company recognized that there is widespread opposition to his remaining on Twitter.

While Al-Najim’s suspension from Twitter will not stop his ability to spread hateful disinformation through a variety of other channels and platforms, it nevertheless represents a major setback for him, an important precedent set on what is and isn’t acceptable discourse, and consequently, a major win for the voices of reason and tolerance.