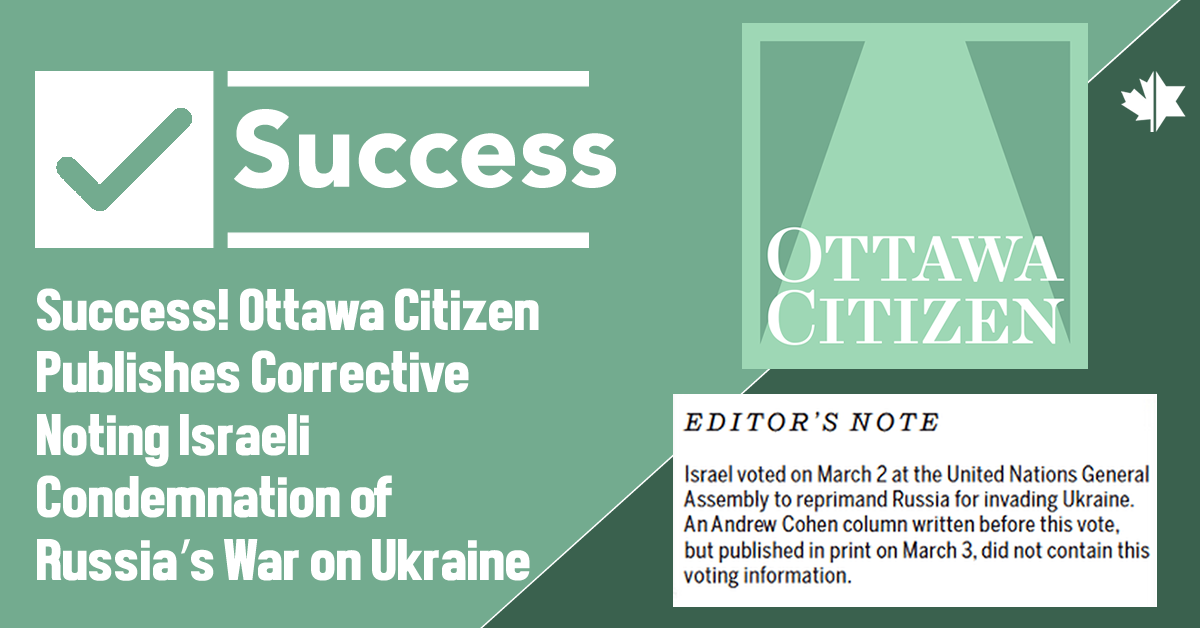 Andrew Cohen is entitled to his own opinions, but not his own facts. Contrary to his claim in a March 3 column published in the Ottawa Citizen, Israel has not been “neutral” in the conflict between Russia and Ukraine.

Instead, Israel voted in favour of a United Nations resolution condemning Russia’s war on Ukraine and has been vocal in its criticism of this illegal war of aggression launched by Vladimir Putin. The United States even went as far as to thank Israel for helping rally additional votes for the UN General Assembly resolution that denounced Russia’s invasion. Israeli Foreign Minister Yair Lapid said: “The Russian attack on Ukraine is a serious violation of international law.” Israel expressed solidarity with the people of Ukraine, called for an immediate ceasefire, offered to mediate talks between the warring parties, and has delivered 100 tonnes of humanitarian aid and medicine to Ukraine.

Furthermore, Israel is set to absorb 10,000+ Ukrainian refugees fleeing war and certain death. In what way are these efforts an act of “neutrality”? Israel has abided by the words of Nobel Prize winner Elie Wiesel who said: “We must take sides. Neutrality helps the oppressor, never the victim. Silence encourages the tormentor, never the tormented. Sometimes we must interfere. When human lives are endangered, when human dignity is in jeopardy, national borders and sensitivities become irrelevant. Wherever men and women are persecuted because of their race, religion, or political views, that place must – at that moment – become the center of the universe.”

It seems that the hottest places in hell are for those who spread falsehoods.

We are pleased to note that on March 29, the Citizen published the following editor’s note in an attempt to set the record straight: