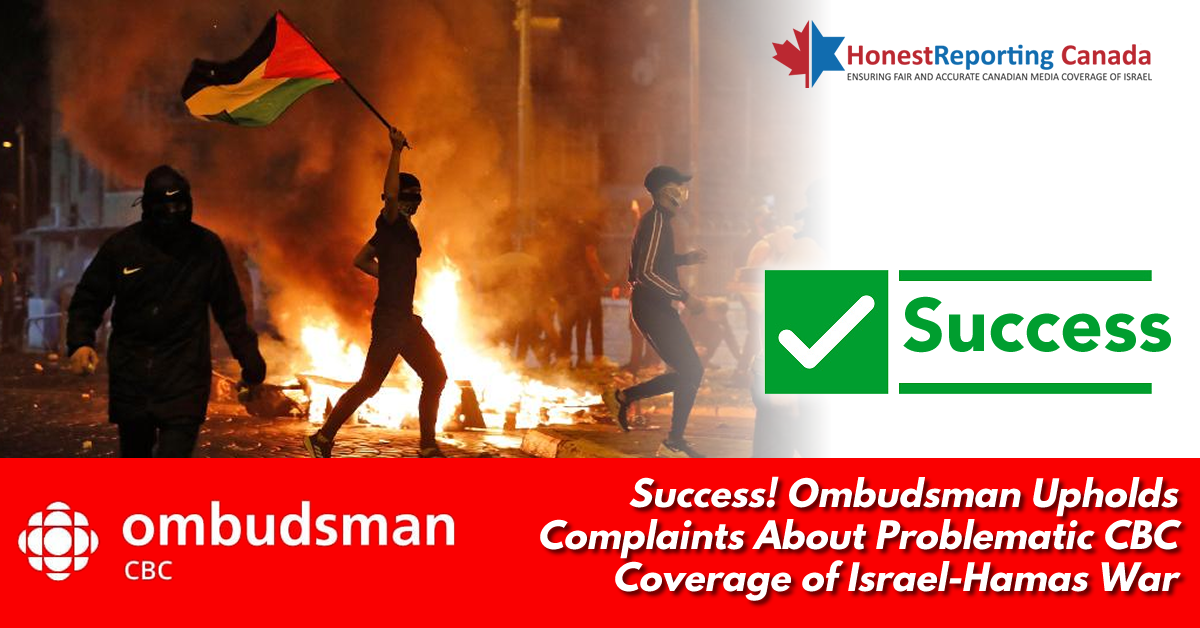 HonestReporting Canada is pleased to share that subsequent to a number of problematic reports broadcast on various CBC News programs last Spring during Hamas’ war against Israel, and thanks to direct action taken by HRC, our subscribers, and the public at large, our public broadcaster’s ombudsman has upheld our concerns in a number of areas.

In a review dated January 28, 2022, CBC Ombudsman Jack Nagler responded to a complaint about a May 11, 2021 broadcast on The National (watch by clicking below), where reporter Saša Petricic described the Hamas-Israel rocket exchange by suggesting that it was Israel who fired first, whereas in truth, it was the Islamist terrorist group. This misrepresentation was pointed out at the time by HonestReporting Canada who filed a complaint directly with CBC News and mobilized our subscribers and Canadians from coast to coast to take action.

In his report, Nagler denied there was any bias on the part of Petricic, but acknowledged that viewers would have been given a false impression of the chronology of events.

Nagler wrote (emphasis added) “It would have been wiser to choose between reporting explicitly on the chronology, or avoiding it altogether. Instead, there was only the passing reference, which left a sliver of ambiguity – just enough that its meaning could be misinterpreted. In that sense, the report failed to live up to the JSP (Journalistic Standards and Practices); the language used was not precise enough to ensure that the report was faithful and easy to understand… There was a violation of policy.”

In his second review covering complaints related to the 2021 Hamas-Israel war, Nagler discussed the May 18 edition of the CBC Radio program “As It Happens” hosted by Carol Off.

In response to an HonestReporting Canada alert, our subscribers wrote to CBC complaining about the aggressiveness and confrontational approach of Carol Off in her interview with Michael Freeman, a policy advisor to Israel’s Minister of Foreign 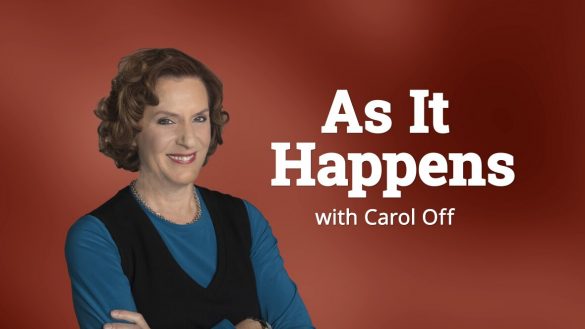 While Nagler defended Off’s track record, he does acknowledge how her interview with Freeman was markedly different from her discussion with Hamas’ Naim.

“I agree with you that the tone of this conversation was different from the tone of the Freeman interview,” Nagler wrote, later adding how listeners were not unreasonable in their complaint. “In the end, I found myself left with this: yes, the two interviews had a different feel, and I understand why you and others might react negatively to that. It would have been ideal if, in questioning Hamas, Ms. Off had made specific mention of the deaths of children, as she had in the interview with Mr. Freeman,” Nagler observed in his report.

This is a significant acknowledgement on the part of CBC. For many years, Carol Off has shown a tendency to give softer interviews to pro-Palestinian voices, while aggressively badgering pro-Israel representatives who join her program as guests.

Though Carol Off recently announced that she’s stepping down as host of As It Happens and will continue to develop new projects for CBC, this recognition may help to hold future CBC radio hosts to account, should they follow in her footsteps of producing antagonistic interviews of pro-Israel guests.

In his third review on the Israel-Hamas war, the CBC Ombudsman discussed a May 11, 2021 radio report on The World at Six, again by Saša Petricic, who covered Palestinian claims of alleged illegal evictions in the eastern Jerusalem neighbourhood of Shimon HaTzaddik (often referred to in the media as Sheikh Jarrah).

In his radio broadcast, Petricic said “Israelis are trying to evict Palestinian homeowners” from the homes where they were living, suggesting that the Palestinians were in ownership of the homes in question. In response, HonestReporting Canada filed a complaint and issued an alert mobilizing our subscribers. 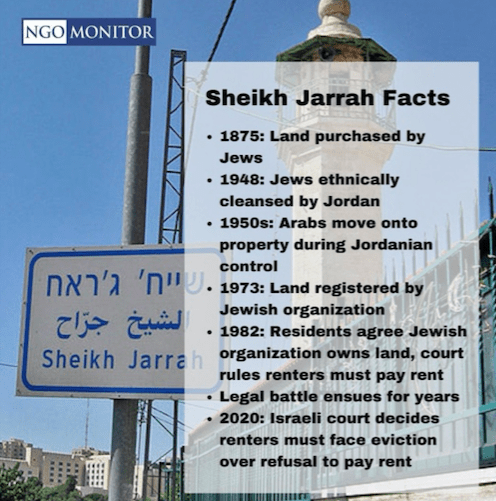 While stating that the issues surrounding the claims of Shimon HaTzaddik/Sheikh Jarrah are “immensely complicated,” Nagler acknowledged that Petricic’s report was indeed a violation of the CBC’s Journalistic Standards & Practices.

Nagler wrote (emphasis added): “In order to be seen as impartial, CBC needed to avoid using language that appeared to take sides on that question. By using “Palestinian homeowners” rather than any number of other possible phrases, it appeared in this instance that CBC had accepted the legitimacy of the claim from the Palestinian side. I highly doubt that this was an attempt to sway anybody on anything, but it doesn’t matter. This was a violation of the JSP.”

These three incidents are stark reminders of how critical it is for subscribers of HonestReporting Canada to take action to hold the CBC to account, not just for inaccuracies, unfairness and for spreading falsehoods, but also for problematic tones and phraseology. Taking even the smallest liberties with the truth can dramatically alter how millions of Canadians perceive Israel and understand the conflict between Israel and the Palestinians. These examples clearly illustrate how YOU are making a difference in countering the CBC’s anti-Israel bias!