In the backdrop of the current unrelenting wave of Palestinian terror attacks that saw the murder of an American tourist and injuries of dozens of Israelis, yesterday morning (March 9), CBC News published an article to its widely read website which featured a headline (“Police kill 2 Palestinians in Jerusalem gun attack”) which portrayed Palestinian attackers as victims and which failed to mention that the 2 dead Palestinians were the ones who initiated violent shooting attacks against Israeli innocents in Jerusalem.

HonestReporting Canada immediately reached out to CBC editors demanding that this highly misleading and unfair headline be corrected. As we conveyed to the CBC, this headline made the guilty party innocent and the innocent party guilty due to its glaring lack of context. It behooved our public broadcaster to tell its readers that the two dead Palestinians were the ones who carried out the brazen shooting attacks and how Israeli police bravely and swiftly responded and acted in self defense killing them.

Immediately following our intervention, CBC amended its headline which now states: “Police kill 2 Palestinian gunmen after Jerusalem attack”. Please see before and after versions below: 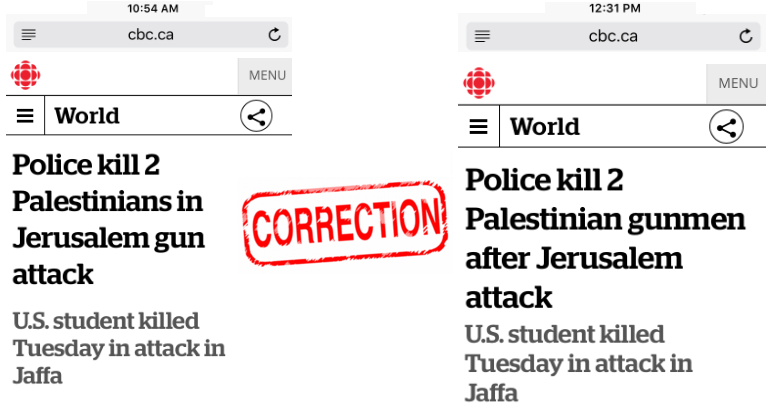 While we appreciate that CBC corrected this headline, regretfully, many readers were likely misled into thinking that Israeli police killed two presumably innocent Palestinians. This issue was exacerbated as readers read headlines 3:1 over the adjacent article, and as you cannot edit Twitter messages such as the following of the CBC’s which will remain in perpetuity, unless deleted by CBC staff:

Not to be outdone, the Globe and Mail couldn’t even bring itself to mention the identity of previous Palestinian attackers. For the Globe’s (and the CBC’s) headline writers, Palestinians seemingly cannot be held responsible: 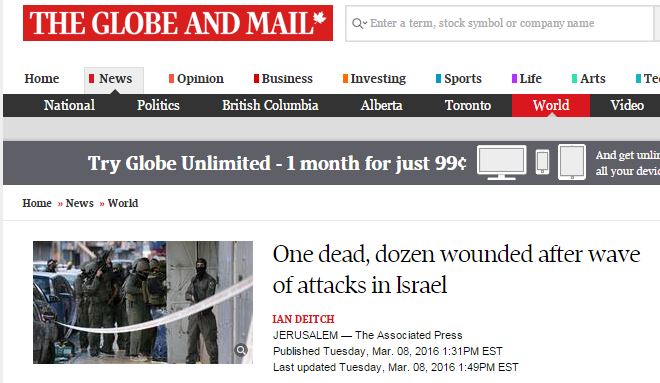 One thing is for certain, HonestReporting Canada will be on the vanguard, ready and willing to put the Canadian media’s feet to the fire.

If you would like to support HonestReporting Canada’s continued efforts of ensuring fair and accurate Canadian media coverage of Israel, please consider making a meaningful donation today. As you can see, our efforts make a difference. When you give a donation to HonestReporting Canada, you’re providing us with the tools we need to expose the lies and to promote the truth. Please support our vital work now by donating today.