SUCCESS! CBC Retracts Claim that Mahmoud Abbas is a "Staunch Opponent of Violence" 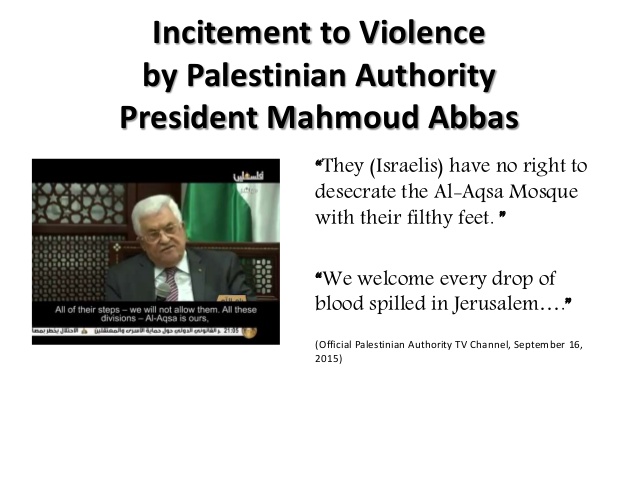 As we noted in our recent critical analysis of Canadian media coverage of the tensions and terror attacks on the Temple Mount, on July 22, CBCNews.ca had featured Associated Press coverage claiming that Palestinian President Mahmoud Abbas is “… a staunch opponent of violence…”

In making this statement, both AP and CBC News inserted their personal opinions into their coverage as this claim is subjective in nature and was not in attribution. Many Israelis and others would contend that Abbas has promoted and not prevented terror. This is the same Abbas that when an Israeli husband and wife were murdered in a drive-by shooting in the west bank last year, Abbas’ Fatah party glorified their murder as being legal and a Palestinian “national duty”. Abbas’ Fatah movement also claimed credit for the attack. Let’s also not forget Abbas’ incendiary speech at the UN where this Palestinian leader tacitly gave a green light for Palestinians to commit terror. In a speech on Palestinian TV on September 16th, Abbas said “we welcome every drop of blood spilled in Jerusalem. With the help of Allah, every shaheed (martyr) will be in heaven… Al-Aksa is ours and so is the Church of the Holy Sepulchre. They [Jews] have no right to desecrate them with their filthy feet.”

This year, Abbas’ Palestinian Authority will give close to $350 million (USD) to Palestinian prisoners in Israeli jails (many serving life sentences for murder and other terror-related offences) and to the families of “martyrs” (including relatives of suicide bombers). What’s effectively known as “pay for slay”. That’s the equivalent of half the foreign aid the PA received that could have gone towards education, institution building, healthcare, etc.

HonestReporting Canada brought these concerns to the attention of CBC editors who agreed that it was “inappropriate” to describe Abbas as a “staunch opponent of violence”. CBC editors retracted this claim and removed it from their news article. CBC also published the following clarification:

While we appreciate that CBC removed this reference from their news article and that a clarification was issued, regrettably, the CBC did not acknowledge in writing that the language that was removed (not amended) from this article, was their previously describing Abbas as a “staunch opponent of violence”. With that said, we take note that a precedent has been set in that Palestinian President Mahmoud Abbas cannot be described by CBC journalists as a “staunch opponent of violence”.