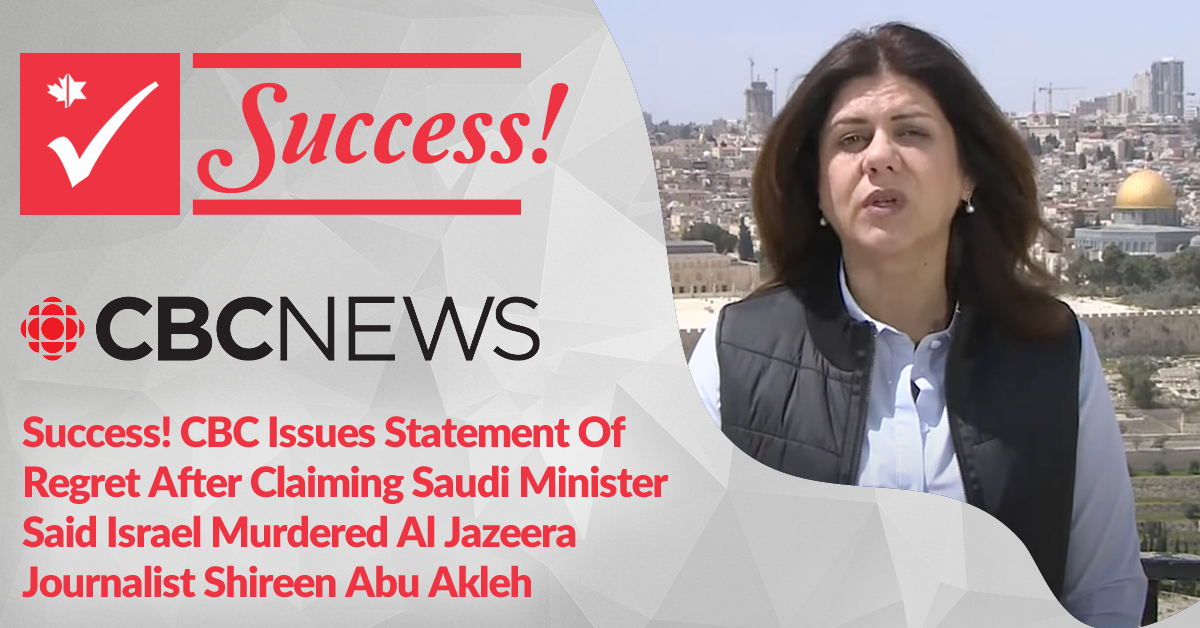 On July 16, CBC News aired an interview report with CBC reporter Kris Reyes who, when describing a meeting between Saudi Crown Prince Mohammed bin Salman and President Biden, who was in Jeddah at the time, erroneously reported the following:

The Saudi minister (Adel Al-Jubeir, Minister of State for Foreign Affairs) went on to say that the U.S. has its own human rights record to defend in Iraq and Afghanistan and also brought up the murder of Palestinian-American journalist Shireen Abu Akleh during an Israeli raid in the West Bank back in May.”

Watch the clip below:

HonestReporting Canada sent a complaint to the CBC asking if it can substantiate that the Saudi minister who, when describing a conversation between MBS and Biden, used the word “murder” to describe the killing of Shireen Abu Akleh. As is commonly known, “murder” is traditionally defined as “the unlawful premeditated killing of one human being by another.”

CNN, by way of example, said that Prince Mohammed also raised the “killing” of Palestinian-American journalist Shireen Abu Akleh during an Israeli raid in the West Bank.

We are pleased to note that in response to HonestReporting Canada’s complaint, CBC released a statement of regret on August 4 for falsely claiming that Saudi Minister Adel Al-Jubeir had said that Israel “murdered” Al Jazeera journalist Shireen Abu Akleh.

Here is the statement by George Achi, the CBC’s Director of Journalistic Standards, that was sent to HRC Executive Director Mike Fegelman:

We spent some time looking into this to make sure we had not been using the word “murder” unattributed anywhere else in our coverage to qualify the killing of Shireen Abu Akleh. If that was the case anywhere online, we would fix any inaccuracy or lack of clarity immediately.

We also confirmed that Minister Al-Jubeir had not himself used the word “murder” in the interview referred to by our reporter. He specifically mentioned “the issue of the Palestinian-American journalist that was killed by the Israeli Defence Forces”.

We regret our inadvertent use of the word “murder” in that context. To be clear, this wasn’t a report about the Saudi perspective regarding Shireen Abu Akleh, so we are confident the story itself wasn’t misleading. Our reporter was paraphrasing comments made by the minister (and reportedly by the Crown Prince) in response to criticism regarding the murder of Jamal Khashoggi. They brought up the killing of Shireen Abu Akleh as a comparison, so it’s not difficult to understand how words got mixed up in this live report. But of course that’s not to say that we shouldn’t have gotten it right. Our language policy is very clear around a word like “murder”, which is not always interchangeable with “killing”. We should have quoted the minister more directly. Our reporter is aware of this issue and understands the need to avoid any kind of misunderstanding.

We thank CBC News for acknowledging this error, for sensitizing its journalists about this issue and for issuing this statement.