Today, the Toronto Star published a letter from CIJA who took anti-Israel columnist Shree Paradkar to task for spreading the falsehood that Israel had denied Palestinians the COVID-19 vaccine.

Meanwhile, Israel, which is tearing past the rest of the world with an impressive vaccination rate of more than 150,000 doses a day, is exhibiting a different kind of entitlement. Rights’ groups say it is only immunizing Jewish settlers in the West Bank and not the millions of Palestinians. Clearly, the state feels entitled to the land but it does not feel obligated to help all its residents, even those it displaced.”

See the following rejoinder from Martin Sampson, Vice-President of the Centre for Israel and Jewish Affairs: 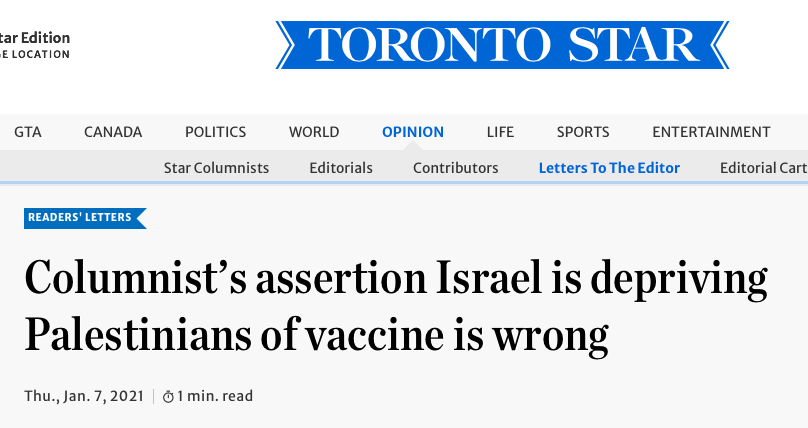 On Jan. 4, the Star’s Shree Paradkar said that Israel’s vaccination campaign is “exhibiting entitlement,” writing that it “feels entitled to the land, but it does not feel obligated to help all its residents, even those it displaced.”

Nothing can be further from the truth.

As part of the Oslo Accords, the agreement that created the Palestinian Authority, Israel transferred the powers and responsibilities over health care to the Palestinians.

Today, the Palestinian Ministry of Health is the primary health-care provider for Palestinians living in the West Bank.

In Gaza, despite the continuing conflict between Israel and Hamas, Israel continues to grant entry to tens of thousands of

Palestinians who are treated in Israel’s top-level hospitals.

Last year, Israeli doctors held a COVID-19 training course for 20 medical workers from the Gaza Strip. A group of doctors and nurses from the Gaza Strip were also welcomed into Israel for training. These efforts were lauded by the UN Special Co-ordinator for the Middle East Peace Process.

The Palestinian Ministry of Health has so far refused to co-ordinate vaccine purchasing and distribution with Israel, with a senior member saying, “We have our own government and Ministry of Health, and they are making huge efforts to get the vaccine.”

Paradkar’s suggestion that Israelis are intentionally depriving Palestinians of health care is lending energy to something that is tantamount to a modern-day blood libel. Conspiracy theories of this nature can and do put Jewish lives at risk. It is a real, persistent, and growing concern.