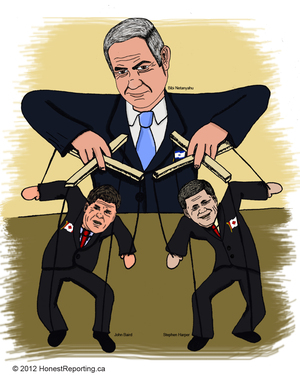 “For its part, Canada has made itself irrelevant in this process. In September 2012, at the urging of Israel, the government of Stephen Harper surprised everyone and broke off relations with Iran.“

While Mr. Burman is entitled to his own opinions, he’s not entitled to his own facts. There’s no evidence to support his claim that the Harper government broke off relations with Iran at Israel’s urging. In fact, at the time, then Foreign Affairs Minister John Baird proclaimed that Canada’s decision to cut diplomatic ties with Iran, brand it a state-sponsor of terror, and to close its embassy in Tehran was a “made-in-Ottawa decision” saying that Canada acted alone in this regard. Baird listed many reasons to explain what prompted Canada’s move against Iran: the safety of Canadian diplomats, Iran’s military assistance to Syria, its hateful antisemitic rhetoric, support for terror, deplorable human rights record, and its destructive pursuit of nuclear weapons.

In an interview with Burman’s former employer, the CBC on September 9, 2012, Israeli Prime Minister Benjamin Netanyahu said: “I wasn’t in consultation with Prime Minister Harper before he chose to do this courageous act in the diplomatic field…” Netanyahu’s official statement described Canada as having made its own determinations, while his spokesperson described Canada’s actions as being “their own, independent decision.”

HonestReporting Canada has filed a complaint with the Toronto Star saying that in light of this information, it’s incumbent upon the Star to issue an immediate retraction to set the record straight.

I have now spoken to the columnist and he stands by his assertion as being based on information from his own off-the-record-sources in Canada’s Foreign Affairs department and in the Middle East.

As you well know, there was considerable public discussion at that time about the Harper government’s strong pro-Israel stance and Netanyahu’s staunch opposition to Iran. It is not surprising that Harper or Netanyahu would officially deny that Israel had influence over Canada’s decision to break off relations with Iran or that sources with inside knowledge of those events would indicate otherwise to a trusted and experienced journalist such as Mr. Burman.

As Mr. Burman told the Star: ‘That is what my sources told me in September 2012, and there is nothing that has surfaced since then – including the pro forma denials by Netanyahu and the Canadian government – that has refuted my assertion.’

In light of the columnist’s reasonable response to these concerns, the Star will not retract this statement. As always, you are welcome to submit a letter to the editor to state the perspective of Honest Reporting on this issue.”

Importantly, the Toronto Star and columnist Tony Burman have altogether failed to substantiate his claim that Canada broke off relations with Iran at Israel’s urging. Burman claims that he got this information, conveniently we might add, from “off-the-record” unnamed sources in “Canada’s Foreign Affairs department and in the Middle East”. In accepting Burman’s response at face value, the Toronto Star has transgressed a basic journalistic principle that requires even opinions to be grounded in facts. The Star’s failure to corroborate Burman’s claim at the onset and after the fact under legitimate scrutiny speaks poorly of this news outlet’s commitment to accuracy.

Furthermore, we repeat our past objections with Burman’s recycling his 2012 anti-Semitic slur in this 2018 column as he restated his characterization of Israeli Prime Minister Netanyahu as “Canada’s new foreign minister” who controls Canadian Middle East policy. As we noted in rebuttal commentaries in the Toronto Star and Huffington Post in 2012:

Straight out of Der Sturmer and the antisemtiic Protocols of the Elders of Zion, Tony Burman, current Ryerson University journalism professor and former head of CBC and Al-Jazeera news, outrageously claimed that Benjamin Netanyahu is Prime Minister of Israel by day and “Canada’s new foreign minister” at night as “the Harper government’s outsourcing of Canada’s Middle East policy to Jerusalem is now complete.”

Throwing objective journalism out the window, Burman peddled this odious conspiracy theory that you’d expect to see in the annals of Holocaust denial websites, on the commentary pages of the Toronto Star on September 7.

Without even a modicum of evidence to support his allegation that Israel controls Canadian foreign policy, Burman used only conjecture and specious argumentation to smear Israel, instead of grounding his opinions in facts.”

Iran is condemned continually — with reason — for its harsh human-rights record. Yet it is more open than many other countries in the Middle East. For example, the status of women in Iran is far better than in Saudi Arabia, and its electoral democracy is more open than in Egypt.”

To wit, Freedom House observes that: “The Islamic Republic of Iran holds elections regularly, but they fall short of democratic standards due to the role of the hard-line Guardian Council, which disqualifies all candidates deemed insufficiently loyal to the clerical establishment. Ultimate power rests in the hands of the country’s supreme leader, Ayatollah Ali Khamenei, and the unelected institutions under his control.”

As well, Human Rights Watch notes that: “Iranian women face discrimination in personal status matters related to marriage, divorce, inheritance, and child custody. A woman needs her male guardian’s approval for marriage regardless of her age and cannot pass on her nationality to her foreign-born spouse or their children. Married women may not obtain a passport or travel outside the country without the written permission of their husbands.The UN Children’s Rights Committee reported in March that the age of marriage for girls is 13, that sexual intercourse with girls as young as nine lunar years was not criminalized, and that judges had discretion to release some perpetrators of so-called honor killings without any punishment. Child marriage—though not the norm—continues, as the law allows girls to marry at 13 and boys at age 15, as well as at younger ages if authorized by a judge.Authorities continue to prevent girls and women from attending certain sporting events, including men’s soccer and volleyball matches.”

Finally, Burman refers to: “…Iran’s Islamic Revolutionary Guards and their military adventures.” Yes, he said those very words. In sharp contrast, the IRGC aides and abets Assad’s henchmen and is responsible for much of the carnage, death and destruction that’s taking place in Syria, with over 500,000 dead and millions displaced. These aren’t mere ‘adventures’, the IRGC are carrying out a murderous campaign which is killing innocent civilians at a scale and pace the world has not seen in recent memory.