Israel Is An Imperfect Country, But A Vibrant...
Why Are Anti-Israel Activists So Afraid of The...
McGill Tribune Publishes Op-Ed Calling for a Boycott...
Ontario Arabic Paper’s Editor Downplays Holocaust; Meshwar Describes...
How the War in Ukraine is Having a...
Toronto Star Columnist Shree Paradkar Wrongly Claims IHRA...
After Vancouver Adopts IHRA, CBC Radio Interviews Fringe...
Qatar Prepares For The 2022 World Cup: Will...
Lawfare: Who is Using the Law More Effectively?...
Official Publication of the College of Physicians and...
Home Media Action Alerts2021 UPDATED: Star Columnist Shree Paradkar Denies Jewish Indiginieity to Israel, Utters Antisemitic Trope 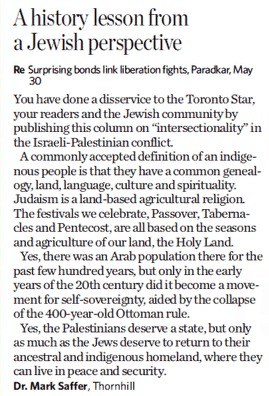 As well, HonestReporting Canada received a response from the Toronto Star’s Public Editor, Bruce Campion-Smith, who defended Paradakar saying he considered her commentary as constituting a legitimate view in accordance with the Star’s allowing columnists to have “wide latitude to express their viewpoints and personal perspectives.”

The Star’s Ombudsman defended Paradkar’s op-ed which also featured a claim that Israeli police trained American police, who then allegedly used excessive force on blacks in America and who allegedly engaged in racism.

As we told the Star, Ms. Paradkar held the Jewish state, and tacitly the Jewish people as a collective, responsible for alleged American police racism and unlawful use of force: This is antisemitic. The International Holocaust Rememrance Alliance (IHRA) Definition of Antisemitism holds that an act is antisemitic when: “You accuse Jews as a people of being responsible for real or imagined wrongdoing committed by a single Jewish person or group, or even for acts committed by non-Jews.”

It’s deeply concerning that this was deemed fit for publication by the Star and was given a platform.

We take note that the Star amended the online version of Paradkar’s column as follows:

Old: ““Israeli police trained police departments in Ferguson, Mo., where Michael Brown was shot, and in Baltimore, where Freddie Gray was killed by police in 2015.””

Revised: “For instance, Israeli police trained police departments in Ferguson, Mo., where Michael Brown was shot, and in Baltimore, where Freddie Gray was killed by police in 2015. The stated objective was anti-terrorism training but such sessions have led to concerns about the sharing of tactics like those cited by Desai.”

As we told the Star, this edit does not redress the harm caused or mitigate matters not one iota.

It was also equally abhorrent that Paradkar denied Jewish indigeneity in the land of Israel. Keep in mind, Paradkar is the Star’s Race and Gender columnist and she is also now an “internal ombud” at the Star whose mandate is to “provide a safe place for BIPOC (Black, Indigenous, People of Color) journalists and all journalists to express editorial-related discrimination and bias concerns if they don’t feel comfortable bringing it to their manager directly.’”

You can’t even make this stuff up!

In a free society like Canada, differing opinions and perspectives on any given topic is expected, even welcome. That is one of the benefits of living in a democratic country. But while having the right to express varied opinions is a protected right in Canada, sharing blatant misinformation should be challenged.

In her oped in the May 30 edition of the Toronto Star, “The surprising bonds that link Palestinian, Black and Indigenous liberation movements,” Shree Paradkar attempts to rewrite history by drawing a link between indigenous movements in Canada, and the Palestinian cause, suggesting that the Jewish People in Israel are colonizers and have no indigenous rights.

This common, though utterly unfounded argument, claims that the Jewish people finally achieved self-determination in their historic homeland in 1948, not because of their three thousand year long history in the land, or their legal title to the area under the British Mandate, or even having won a defensive war against invading Arab armies, but rather because of Western guilt over the Holocaust. It’s also equally appalling that she casts Israelis as all implicitly being caucasian, despite the fact that there are Jews of every colour, whether from Ethiopia, Syria, Egypt, Iran, etc. Keep in mind, this screed was written by the Star’s race and gender columnist!

This point is not only without any factual basis whatsoever; it is incredibly offensive and bigoted. Paradkar’s oped is ostensibly written to support the claims of the Palestinians to live in their own land, and yet ends up denying the Jewish People’s right to live, unmolested and harassed, in their own land as well.

Contrary to Paradkar’s point, the Jewish People are far from colonizers; in fact they are the exact opposite. Israeli Jews today speak the same language and walk in the same steps as their ancestors and prophets more than three thousand years ago. Archaeological findings from millenia ago, and dug up in Israel regularly feature Jewish symbols and Hebrew words. And yet, the impression many readers would be given by Paradkar’s oped is that Jews are relatively recent arrivals to the area, without much history at all.

Despite thousands of years of occupation by Babylonians, Romans, Crusaders, Arabs, Ottomans, and the British, the Jewish People in their historic homeland finally secured independence just 73 years ago, in 1948. The United Nations voted to split the Jewish historic homeland into two, an Arab and a Jewish state, respectively. The Jewish delegates accepted, while the Arab delegates rejected it, and soon declared war on the nascent Jewish state.

Contrary to Paradkar’s assertion, the Balfour Declaration provided support for the establishment of a “national home for the Jewish people” in Palestine. Her assertion that the British “colonized Palestine” when they captured present-day Israel and Jordan form the Ottomans during WWI is pure historical revisionism, as is her claiming that there was an indigenous Palestinian people whose homelands were seized by the British. Of course, there was no Palestinian national identity prior to the 1960’s.

Contrary to Paradkar’s claims, the PLO didn’t use “armed struggle,” they resorted to terrorism, plain and simple.

It gets worse. Paradkar claimed that (emphasis added) “Israeli police trained police departments in Ferguson, Mo., where Michael Brown was shot, and in Baltimore, where Freddie Gray was killed by police in 2015.”

On this issue alone, the Anti-Defamation League (ADL) has said that “Seeking to link Israel as a state to US police misconduct is a bizarre excuse for the centuries-long history of racism and injustice that has been part of American history, really since our founding.” Paradkar is trying to suggest that Israel is to be blamed for American police using excessive force and being racist, that’s a bonafide antisemitic trope if there ever was one.

Paradkar also uttered the following falsehood: “Meanwhile, Palestinians in Gaza were undergoing an aerial and ground invasion by Israel.” This is a complete falsehood. There was no Israeli ground offensive in recent hostilities.

Paradkar also claimed that: “Across Canada, thousands of people have rallied to support Palestinians, as they were newly bombed by Israel” No, Israel bombed Hamas terrorists after they fired 4,000+ rockets at Israel.

Importantly, contrary to Paradkar’s suggestion,  the Jewish People are one of history’s oldest anti-colonizers: taking back their language and independence after thousands of years and persecution and denial of their rights. And Israel did more than just exist; it thrived. Today, all Israeli citizens – Muslim, Christian, Jew, Druze – have full and equal rights in society, from voting to civil rights. Muslims sit in Israel’s Knesset (parliament) and have served as Supreme Court justices. And yet, Paradkar regards Israel as an “apartheid” state!

Comparing the Jewish people’s quest for self determination to colonialism is misleading enough, but Paradkar’s timing is especially egregious, particularly with the dramatic increase in antisemitic attacks throughout the United States, Europe and even here in Canada in recent weeks.

Canadian Jews, already the number one targeted group in the country for religiously motivated hate crimes according to a recent Statistics Canada report, suffered harassment, physical assaults and even ominous incidents of anti-Israel activists driving through predominantly Jewish areas in Toronto and Montreal, yelling at visibly Jewish passersby. It is in this milieu that the necessity of a Jewish State should be paramount. And yet, scandalously, it is in these circumstances in which Paradkar calls into question Israel’s legitimacy.

Practically speaking, what is the step forward, then, in reconciliation between the region’s Jews and Arabs, two peoples sharing one small sliver of land smaller than Vancouver Island?

The first and most important step is to accept the right and legitimacy of the other to live in that land, given that neither are going anywhere. It is in that vein that Israel has made multiple offerings to its Palestinian neighbours in recent decades, with every single one of them rejected, often followed by violence. In 2005, Israel ripped thousands of Jews from their homes in Gaza, many of whom had lived there for generations, in a unilateral attempt at peace.

In contrast, the official charter of Hamas continues to call for the destruction of the State of Israel and under Mahmoud Abbas, a future state of Palestine would have to be Judenrein (Jew free).

Clearly, then, there is no middle ground between the Jewish State, and those who seek to destroy it. The Palestinians, who deserve a home of their own, are being denied that by their own corrupt leadership which seeks to fight and delegitimize Israel rather than seeking out their best interests. And the more in which pundits here in Canada continue to do likewise, they will only push the Palestinians’ statehood further into the horizon, as well.

Take action now! Shree Paradkar’s latest column is deserving of your forceful rebuke for her denial of Jewish indigeneity in the land of Israel, her uttering antisemitic tropes and spreading blatant falsehoods. Send letters to: lettertoed@thestar.ca.